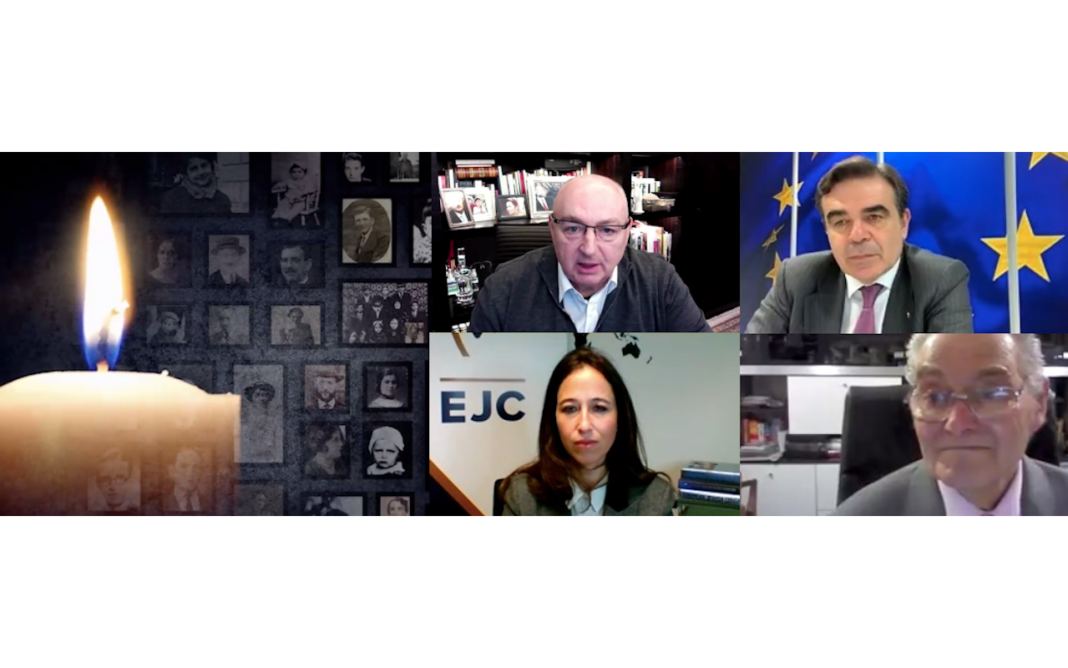 During a joint International Holocaust Remembrance Day event, co-hosted by the European Commission and the European Jewish Congress (EJC), held online today, EJC President Dr. Moshe Kantor called on the member states of the European Union to ensure that Holocaust survivors have access to a Covid-19 vaccine as soon as possible.

“We have all been lost during the current pandemic, but the survivors of the Holocaust even more so,” Dr. Kantor said. “Throughout their lives, they have shown mighty strength of spirit, but in the current crisis, many have sadly died alone and in pain, or are now fighting for their lives, and many others are suffering from extreme isolation. We have a duty to survivors, to ensure that they are able to live their last years in dignity, without fear, and in the company of their loved ones.”

At the event, Dr. Kantor also spoke about how during the pandemic, hate, extremism and conspiracy theories have also spread globally.

“As we pay tribute to the victims of the biggest tragedy in history, we must not forget the fundamental lesson that in times of crisis, extremism can rise rapidly,” Dr. Kantor said. “The pandemic has created the social conditions where antisemitism and extremism thrive. The human mind, like the human body is fragile to mutating viruses. And so are our democracies and our shared values of human rights and freedoms.”

“We have a responsibility to prevent the spread of hate speech and conspiracy theories, and I am pleased that the European Union and Member States are finally addressing this new threat by recognizing that antisemitism needs to be fought across all policy areas.”

Also, speaking at the event was Vice-President of the European Commission Margaritis Schinas.

“This year, against the backdrop of the pandemic, we are all asked to find new forms of remembrance.” said VP Schinas. “It is a painful reminder of how incredible a privilege it is for our generation to be able to listen to the first-hand accounts of those who directly experienced the tragedy of the Holocaust. We have a duty to listen. To remember. But also, a duty to act decisively against antisemitism in its contemporary forms.”

Vice President Schinas was in conversation with Tomi Reichental, a survivor of Bergen-Belsen, on the lessons of the Holocaust for 21st century Europe, new forms of remembrance, concepts of atonement and reconciliation, and our common duty to speak up and counter Holocaust denial and distortion. The conversation was moderated by EJC Director of European Affairs Ariella Woitchik.

Excerpts of the film “Close to Evil” were also shown at the event. The film is the compelling story of Reichental’s quest to meet one of the SS women who held him captive in Bergen- Belsen. The documentary has won prizes at the Galway Film Fleadh and the Irish Film Institute’s “Stranger than Fiction” Festival and was screened on RTE in 2014.

Factsheet about Tomi Reichental
Tomi Reichental is an 85 year-old Irish-Slovak survivor of Bergen Belsen. He was born in 1935 in Piestany, Slovakia to a Jewish family. He is one of the very few Holocaust survivors left in Ireland today.

Tomi was 9 years old in October 1944 when he was rounded up by the Gestapo in Bratislava. Along with 12 other members of his family he was taken to a detention camp in Slovakia, where the elusive Nazi War Criminal Alois Brunner had the power of life or death.

Tomi, along with his mother, brother, grandmother, aunt and cousin were dumped into a cattle wagon on a train bound for the Bergen-Belsen concentration camp.

“In the camp I could not play like a normal child, we didn’t laugh, and we didn’t cry. If you stepped out of line, you could be beaten up even to death. I saw it all with my own eyes”.

When he was liberated in April 1945, he discovered that 35 members of his extended family had been murdered in the Holocaust.

Tomi moved to Ireland in 1959, where he rebuilt his life. For 60 years, he refused to talk about his experiences, until in 2004 he was invited by his son to appear before a group of schoolchildren. In his own words, he did not speak out “because I didn’t want to, but because I couldn’t.”

As to why he decided to take the courageous leap to break into the emotional exposure of public remembrance, Tomi puts it very simply: “In the last couple of years I realised that, as one of the last witnesses, I must speak out, I owed it to the victims that their memory is not forgotten.”

Ever since, he has been on a mission of remembrance. He travels up and down Ireland twice a week to talk to thousands of secondary school students. At 85 years of age, Tomi Reichental never refuses an invitation to speak to pupils, no matter how far away or how small a class.

Tomi has received many accolades for his eorts, such as Order of Merit of the Federal Republic of Germany for his untiring commitment to furthering mutual understanding, reconciliation, the Human Rights Award of the Bar of Ireland and the RTE International Person of the Year award. He has also been awarded four honorary degrees by prestigious Irish universities.

Since Tomi began to speak in schools, he is also regularly invited to present his lectures for private events. He has addressed the Irish Parliament, the European Parliament, as well as Harvard University, Cambridge University, TEDX, churches, mosques, military bases, and countless other fora.

Tomi’s story is a story of the past. It is also a story for our times. The Holocaust reminds us of the dangers of racism and intolerance, providing lessons from the past that are relevant today. In Tomi’s words “The Holocaust didn’t start with cattle wagons and gas chambers, but with whispers, taunts, daubing, abuse, and finely murder. One of the lessons we must learn is to respect dierence and reject all forms of racism and discrimination.”