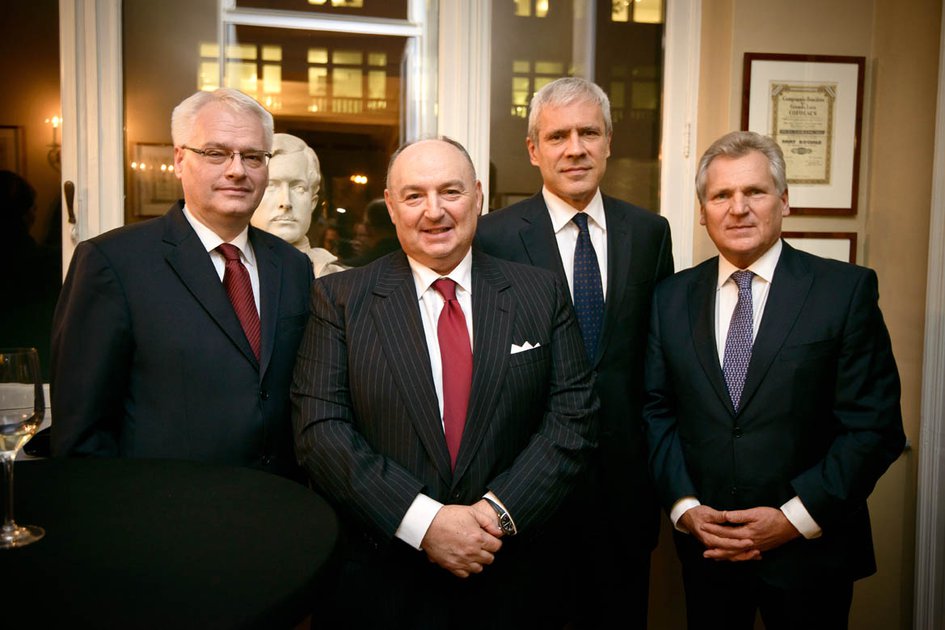 BRUSSELS, 16 OCTOBER 2012
Conferred on them by the European Council for Tolerance and Reconciliation (ECTR), an independent organization uniting former European heads of states, Nobel Peace Prize laureates and other tolerance-promoting individuals, European Jewish Congress president Moshe Kantor spoke of the Balkan War being a “bump in the road” of the European Union’s path to becoming more democratic and tolerant at a press conference announcing the honourees.

Croatian President Ivo Josipovic was honoured alongside former Serbian President Boris Tadic with the second-ever European Medal of Tolerance Award Tuesday in Brussels, in recognition of the Balkan statesmen’s “significant contribution to promoting, seeking, safeguarding or maintaining Tolerance and Reconciliation on the European continent”.

Conferred on them by the European Council for Tolerance and Reconciliation (ECTR), an independent organization uniting former European heads of states, Nobel Peace Prize laureates and other tolerance-promoting individuals, European Jewish Congress president Moshe Kantor spoke of the Balkan War being a “bump in the road” of the European Union’s path to becoming more democratic and tolerant at a press conference announcing the honourees.

Praising both recipients for their efforts in “opening the way to building trust between Balkan nations”, former President of Poland Aleksander Kwasniewski added that “reconciliation is a long, difficult and important process that will never be finished”, congratulating the EU on its recent Nobel Prize award, and highlighting the founding principle of the EU as centring on reconciliation. Stressing the need to create open border and open trade to accommodate the legions of displaced people across the European continent following WWII, he said “if you see the relationship today between old enemies France and Germany, you see what can be achieved through reconciliation”.

“The EU vision and dream is at a crossroads,” cautioned Kantor. Whist praising the unity between eastern and western Europe in the wake of the lifting of the Iron Curtain, he warned of the inevitable rise of influence of far-right nationalist parties amid a climate of financial crisis in Europe and beyond. “The EU of 2012 is as intolerant as ever before,” he said, highlighting the example of the entry into parliament of the extremist Greek Golden Dawn party, which openly uses Swastika iconography as its party symbol.

Talking of the need for “rules, proposals, laws” to make tolerance mandatory across the EU, he introduced ECTR’s proposals for a general law of tolerance, which was presented later Monday at an official ceremony in the presence of European Parliament President Martin Schulz, as well as the two recipients of the European Medal of Tolerance.

Croatian President Ivo Josipovic has occupied office since 2010, having previously presided over the democratisation of the former Communist party, to become the Social Democratic Party, over which he currently presides. He was elected into power, having campaigned for Nova Pravednost (New Justice), calling for a new social and legal framework to address the deep social injustices, corruption and organised crime, and the protection of individual and fundamental human rights.

In April 2010, Josipovic met with the Bosnian Croat Catholic archbishop cardinal Vinko Puljić and the head of the Islamic Community reis Mustafa Cerić and the three made a joint visit at the sites of Ahmići massacre and Križančevo selo killings, and paid respect to the victims. Ivo Josipović made an official visit to Bosnia during which he addressed the Parliamentary Assembly of Bosnia and Herzegovina, and in his speech he expressed a “deep regret” for Croatia’s involvement in efforts to divide Bosnia and Herzegovina in the 1990s, resulting in the Croat-Bosniak war and suffering for many people on both sides, for which move he was criticised by political rivals, who accused him of breaching the Croatian constitution.

During a visit to Israel in February 2012, Josipovic also apologized for the Ustaše crimes against Jews in 1940’s.

Former Serbian President Boris Tadic served almost two terms as president, ending in his resignation in April 2012. He has been a staunch supporter of Serbia’s accession talks to the EU. In 2004, he made an official apology on a trip to Bosnia-Herzigovina to all those who suffered as a result of crimes committed in the name of the Serbian people. He has since further spoken out against the breakup of Bosnia-Herzegovina, instead defending its territorial integrity.

Tadić presided during the independence referendum in Montenegro (2006). He was the first foreign head of state to visit Montenegro after it became independent on 8 June, and promised to continue friendly relations. Serbia declared independence as well, and Tadić attended the first raising of the flag of Serbiaat the United Nations Headquarters in New York.

In 2007, he similarly issued an apology to Croatia for any crimes committed in Serbia’s name during thewar in Croatia. He has declared that all war criminals should face trial by an international court for their crimes and personally handed over former Serbian President Slobodan Milosevic to The Hague to be tried on war crime charges in relation to his activities in wars with Bosnia, Croatia and Kosovo.

The inaugural European medal of tolerance was conferred on King Juan Carlos I of Spain in 2010 for his lifelong dedication and devotion to the issues of tolerance and political reconciliation.

ECTR Round Table “Tackling Extremism And Intolerance In A Diverse Society”. Awarding Prince of Monaco Albert II with the European Medal of Tolerance. Monte Carlo, Monaco