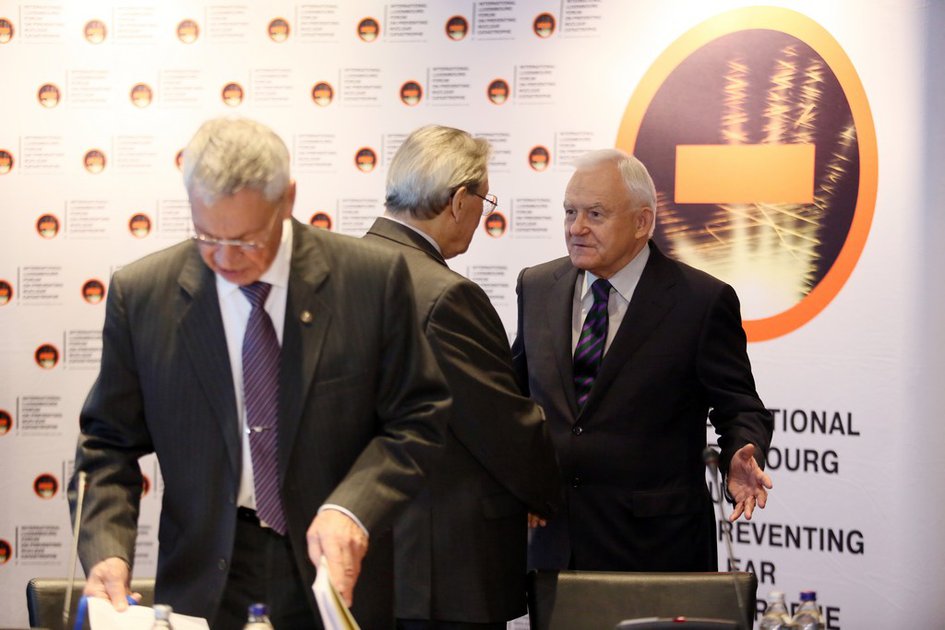 WARSAW, POLAND, 10-11 DECEMBER 2013
On December 10, 2013, a meeting of the Supervisory Council of the Luxembourg Forum on Preventing Nuclear Catastrophe was convened in Warsaw.

Members of the Supervisory Council summed up the Forum’s work over the past year, analyzed the existing situation with regard to the limitation and reduction of nuclear weapons, non-proliferation of weapons of mass destruction and formulation of the criteria for secure nuclear tolerance, and defined tasks for 2014.

On December 10, 2013, a meeting of the Supervisory Council of the Luxembourg Forum on Preventing Nuclear Catastrophe was convened in Warsaw.

Members of the Supervisory Council summed up the Forum’s work over the past year, analyzed the existing situation with regard to the limitation and reduction of nuclear weapons, non-proliferation of weapons of mass destruction and formulation of the criteria for secure nuclear tolerance, and defined tasks for 2014.

The meeting was attended by Stanford University professor and former US Secretary of Defense William Perry, Chancellor and Distinguished Professor of the Australian National University and former Australian Minister of Foreign Affairs Gareth Evans, Member of the Presidium of the Russian Academy of Sciences, RAS Academician Nikolay Laverov, Chairman of the Luxembourg Forum Organizing Committee, chief researcher at the Center for International Security at the Institute of World Economy and International Relations of the Russian Academy of Sciences Vladimir Dvorkin, and other renowned experts on nuclear disarmament and non-proliferation of mass destruction weapons.

The meeting focused on issues of secure nuclear tolerance and setting the criteria for undeclared development of nuclear weapons to be used by the IAEA and the UN Security Council to define the nature and objectives of NPT (Nuclear Non-proliferation Treaty) member states’ nuclear programs. The meeting also considered the prospects for nuclear disarmament and arms control, strengthening the non-proliferation regime for weapons of mass destruction, ballistic missile defense cooperation and its role in the nuclear disarmament process.

As Luxembourg Forum President Viatcheslav Kantor noted, “[i]n the near term, further reduction of nuclear weapons is unlikely due to a dead end in Russian-U.S./NATO relations mainly on the missile defense issue. The dead end is due to the plans of the previous U.S. administration to locate a military base for strategic interceptors in Poland, in the immediate vicinity of the Russian border. Later, these plans were revised but there is still tension in the bilateral relations.”

“In the future, position of the Republic of Poland will strongly impact the settlement of this issue and other disarmament issues and, consequently, the very non-proliferation regime,” Kantor continued, underscoring that among Eastern European countries Poland plays a crucial role in strengthening the strategic partnership between the West and the East, particularly in addressing the issues immediately related to the functions of the Luxembourg Forum: reinforcement of the non-proliferation regime, reduction of nuclear weapons, and counteracting nuclear terrorism.”

The meeting paid special attention to the problem of the Iranian nuclear program, especially in the light of the agreement signed this November 23 in Geneva with the group of six international intermediaries (five permanent members of the UN Security Council and Germany) as a Joint Plan of Action. “Taking into account that since 2006 Iran has been completely ignoring all the five UN SC resolutions, four of which include practically “cosmetic” sanctions requiring to stop uranium enrichment, this agreement can be viewed as a breakthrough,” said Viatcheslav Kantor.

“Adopting such sanctions with respect to the NPT member-states, if any facts are revealed about starting a nuclear weapons program, should be an important lesson in strengthening the nuclear non-proliferation regime,” added the Luxembourg Forum president. “Generally, we will be able to estimate the role and impact of the executed Agreement only in the course of its performance and in the process of formulating and approving during the next year of a comprehensive treaty, which would help finally resolve the Iranian nuclear issue, which for over a decade has been the most critical link in the chain of stability of the NPT and the entire nuclear non-proliferation regime.”

Members of the Forum’s Supervisory Board gave their estimate to this year’s work and made proposals regarding the Forum’s agenda for 2014. In particular, experts plan to review the entire complex of traditional and new problems of minimizing nuclear threats. In parallel, they will continue research on secure nuclear tolerance, and discuss and find the ways to address the existing problems of non-proliferation of mass destruction weapons and their delivery means, reduction of nuclear weapons and anti-missile defense, and analyze the situation on the Korean Peninsula and recent developments with respect to the Iranian nuclear program.

The Forum is one of the most representative non-governmental organizations uniting leading world experts on non-proliferation of nuclear weapons, arms reduction and limitation. The Forum is headed by its President, Viatcheslav Kantor, PhD. The principal guiding bodies of the Forum are the International Advisory Council (IAC) and the Supervisory Council (SC).