MAGMA Exhibition in the Palace of Nations in Geneva 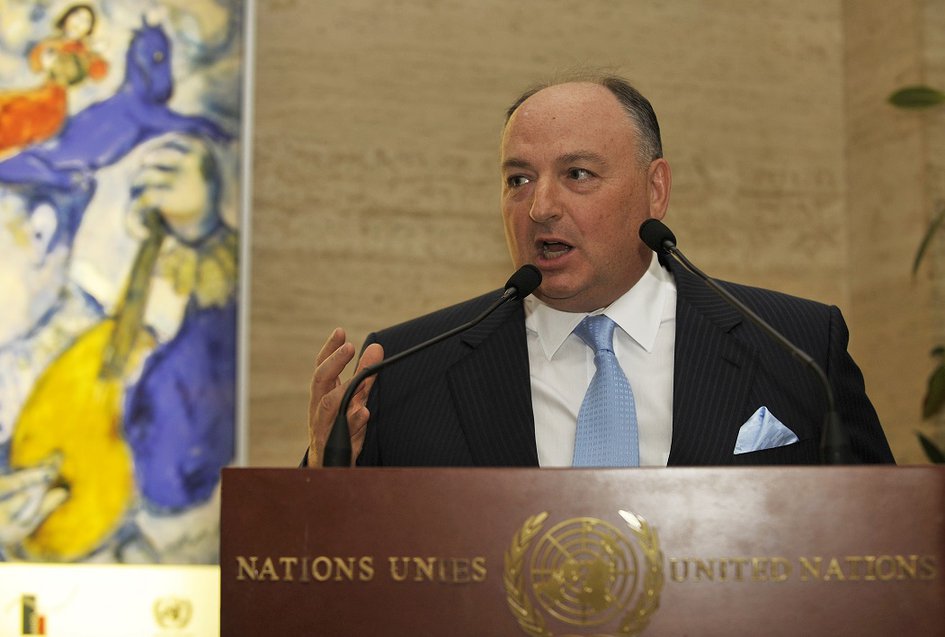 GENEVA, 1 JUNE — 31 AUGUST 2009
The Museum of Avant-Garde Mаstery presented its collection for the first time at the exhibition “My Homeland is within My Soul: Art without Borders”, which took place at the Palace of Nations in Geneva from June 12 to July 17, 2009

The Museum of Avant-Garde Mаstery presented its collection for the first time at the exhibition “My Homeland is within My Soul: Art without Borders”, which took place at the Palace of Nations in Geneva from June 12 to July 17, 2009.

Andrei Tolstoy, Correspondent Member of the Russian Academy of Arts, chairman of the Russian section of UNESCO’s International Association of Art Critics (AICA) and a leading researcher of Russian émigré art, who curates the exhibition, says: “This exhibition is about the contribution émigré artists from Russia made to 20th-century art. It decisively proves the infinity of artistic quests beyond the boundaries of national schools. The Museum of Avant-Garde Mаstery Collection demonstrates this idea superbly.

Viacheslav Kantor, President of the European Jewish Congress, came up with the idea of establishing such a new artistic institution and became its founder. Guided by a fervent desire to collect works by Jewish artists of Russia, Kantor aimed primarily to trace their influence on the development of 20th-century art. The result, however, proved far more significant. Within a mere ten years, the drive of a man with no professional art connections, but a collector’s gift and an instinctive feel for art, seeking from the outset to acquire works of fundamental importance, led to the emergence of a museum-level collection on a par with far older major collections. Now, the museum’s collection of over 300 top-class pieces can shed light on the half-forgotten and underestimated ’continent’ – the fundamental contribution Russian emigres made to the international art canon.”

The unprecedented phenomenon of the Paris School is a brilliant example. The French capital’s art-infused atmosphere, warmly welcoming artists from many countries, helped their talents come to fruition. The local air of freedom and tolerance enabled artists from the Russian Empire’s outlying shtetls to realize their profound talents. Close cooperation between them brought about an exceptionally large-scale and unsurpassed phenomenon in 20th-century art. This accomplishment would hardly have been possible had the French political elite not taken an active part. Suffice it to remember what former President Georges Pompidou of France did to this end. A major and most representative museum of 20th-century art, in which Paris School artists hailing from the Russian Empire occupy pride of place, has been named after Pompidou.

Under his successor, Valery Giscard d’Estaing, Ossip Zadkine, another Paris artist who was born in Smolensk and whose works came to adorn the capital of his newly found homeland, had his museum open there. This happened over and again – wherever émigrés from Russia found themselves, be it Europe or the USA, the spirit of tolerance as a guarantee of the freedom of creative self-realization supported and encouraged mutually beneficial cross-fertilization of cultures that produced genuine masterpieces – part and parcel of 20th-century art.

“For me our museum is not only a source of pride,” says Museum President Viacheslav Kantor. “It is a school that teaches one more than the history of art. Looking at these works and rereading classics of Jewish literature, I can’t stop being surprised by the paradox: surviving the tribulations of revolutions and wars and exposed to the humiliation and ruin of the Pale and urban ghettos, Jews suffered the most from unrequited love – not from the drama of life but from the drama of emotions. Everything our museum has to be proud of is a product of love. I see love as the supreme human gift, rather than that of injured pride or social protest.” For its founders the museum has become a school of humaneness and tolerance. Among other things, the exhibition aims to urge people to build a tolerant society.

It is only natural that the Palace of Nations, a center of international diplomacy whose construction history is a perfect example of fruitful cooperation, has been chosen as the exhibition venue. The architects Carlo Broggi of Italy, Julien Flegenheimer of Switzerland, Camille Lefèvre and Henri-Paul Nénot of France and Joseph Vago of Hungary were involved in building the Palace. The first foundation stone of this classical Art Deco building was laid on September 7, 1929.

The well-known Russian architect Yuri Avvakumov, designer of many a wonderful exhibition in Russia, Germany, France, and Italy, as well as the forthcoming exhibit, designed it with this landmark’s architechtural style in mind.

Aware of culture’s special role in promoting a tolerant society, Kantor has brought a number of major enlightening projects to fruition, emphasing cultural interpenetration. The exhibition is to inaugurate a series of shows planned by the Avant-Garde Art Museum. The Museum collection display has been conceived as an ongoing exhibition project. In the next few years this collection is to be shown in the world’s best museums. About 40 works will be put on show in Geneva, including works by Leon Bakst, Alexander Tyshler, Chaim Soutine, Sonya Delaunay, Jacques Lipchitz, Ilya Kabakov, Erik Bulatov and Viktor Pivovarov.

The three sections of the display – “Experiments of the 1920s”, “Paris School” and “From Nonconformism to Conceptualism” – outline phenomena with a particularly noticeable imprint of artists from Russia. Many of them have gone down in world art history. The international nature of art fully manifested itself in their works.

The first section focuses on Leon Bakst, Robert Falk, Lado Gudiashvili, Alexander Tyshler and David Shterenberg. Works have been selected so as to convey the breadth of their creative endeavours. These include Shterenberg’s experiments in evolving especially expressive plastics and Tyshler’s search for new poetics.

Tyshler’s two rare early works (The Flood and Director of the Weather, 1926) give a good idea of the magnitude of his gift. As ever, artistic inventiveness goes hand in hand with the desire to convey themes embedded within national identity to the full. Gudiashvili’s Georgian Festival and Ryback’s Pogrom are graphic examples.

The international phenomenon of the Paris School incorporated works of many Russian émigrés. Chaim Soutine was a notable representative. The Museum of Avant-Garde Mаstery has the largest private collection of works by this master. His Confectioner of Cagnes, coming originally from the famous collection of Paul Guillaume, is one of the most expressive pieces. No less striking is A Woman in Green, which serves as an accompaniment to Modigliani’s Portrait of Girl in a Black Dress in this exhibit. This is the only work on display by a non-Russian artist. However, like every artist of the Paris School, an international conglomerate fused together by common artistic quests and human destiny, Modigliani had strong ties of joint work and friendship with émigré artists from Russia.

The Museum collection also has works by artists whose genetic links with Russia are not so obvious today. These include Louise Nevelson, born in Kiev, and Mark Rothko, born in Dvinsk, who made a significant contribution to the development of art in the second half of the 20th century (the latter is represented by an early portrait of Joe Liss, 1939). In the first half of the past century Ossip Zadkine, Jacques Lipchitz, Sonya Delaunay, Naum Gabo and, of course, Marc Chagall were the key figures.

Within the exhibition space Chagall’s Clown Musician (one of the three pieces by Chagall in the Museum collection) enters a never-ending dialogue with the Black Square by Kasimir Malevich, though indirectly; the black square is the main feature of a work by Eduard Shteinberg, which opens the third section of the exhibition. Only a small portion of works by Nonconformist and Conceptualist artists from the Museum collection could be shown due to the limited scale of the current display. Nevertheless, all of them deserve close attention. Vladimir Yakovlev, Vladimir Yankilevsky, Mikhail Shvartsman, Dmitry Lion, Yuri Kuper, Viktor Pivovarov, Erik Bulatov and Grisha Bruskin, to say nothing of Ilya Kabakov (whose Beetle is on show, and four of whose important works belong to the museum), have long become “citizens of the world” in more than a purely existential sense. Their work brought the 20th century to a close. This is precisely why the Museum of Avant-Garde Mаstery has decided to hold its first public show. The time captured in these artworks has become history. Like any history, this collection deserves to be a lesson to a new generation of viewers, collectors and artists.

Bestowing of a Mantle of the Honorary Member of the Russian Academy of Arts to the President of the Museum of Avant-garde Mastery (MAGMA) Moshe Kantor. Moscow, Pushkin Museum