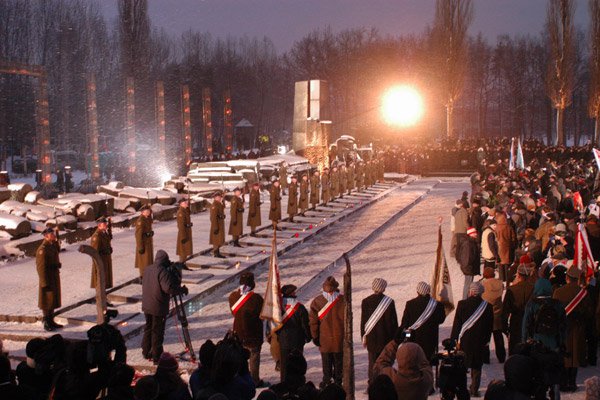 KRAKOW, 27 JANUARY 2005
Every single tragedy in the world is our tragedy – this is the message conveyed to later generations by witnesses of the extermination in KL Auschwitz-Birkenau. Our task is to bear anew the memories of the crimes of the past, in order to enable future generations to prevent similar tragedies.

The European Jewish Congress, represented by the Chairman of the Board of Governors Mr. Moshe Kantor, decided not only to mark the 60th anniversary of the liberation of Auschwitz-Birkenau, but also to ensure that the legacy of the Shoah will be passed to future generations. It was decided to convene this International Forum, where a commitment was made that no event like the Shoah will ever be repeated, and affirmed the importance to teach and learn about xenophobia.

The most important lesson learned from the crimes committed at concentration camp Auschwitz-Birkenau is the obligation to react to any form of intolerance against any group. KL Auschwitz-Birkenau is the main site and symbol of the Nazis’ state enterprise of extermination of European Jewry. It was also the site of crimes committed against people of other nationalities and faiths. The evil experienced by mankind in the 20 thcentury is focused there as if through a lens – particularly that of antisemitism.

The history of the 20th century is also a history of indifference and of the lack of reaction to growing evil. No one in the world reacted when forced labour camps were established in the Soviet Union. More complacency marked the establishment of concentration camps ten years later in Nazi Germany. In another 10 years, the growing evil there led to the unprecedented and unequalled crime of the Holocaust. The lack of world reaction to persecution, to depriving people of civil rights, and to locking people in ghettos made it easier for the Nazis to make the decision known as the Final Solution to the Jewish question” (“Endloesung”). The Second World War, unleashed in the name of hatred, claimed the lives of 50 million Europeans. The lessons of the past show us that evil committed somewhere else in the world is also our concern, as sooner or later it can turn against us.

The Holocaust concerns everyone. In addition to the six million Jews who were murdered in the Holocaust, tens of millions of soldiers and civilians were killed across the continent during World War II. How many lives could have been saved if there had been no indifference towards violence!

The Holocaust is a Jewish issue; but it has broad universal lessons that affect the rest of the world. As a result of Nazi crimes, almost 90% of European Jewry was killed and there are few Jewish families that have not suffered a loss. In each European family or family having European roots the memory of the tragedy is kept. And we will always preserve the memory of the victims.

We must all deal with the Holocaust – Jews and non-Jews alike –as it is an historical experience of crimes.. To prevent the repetition of such crimes, it is vital to remember them and to promote education and awareness of their history and consequences.

The 60th anniversary of the liberation of concentration camp Auschwitz-Birkenau is a particularly appropriate day to revive the memory, since it may prove to be the last chance for the victims and witnesses of the crimes to impart their experiences to the next generation.

The International Forum “Let My People Live!” initiated the process of strengthening awareness and the memories of the crimes of the past. Its purpose was to prevent such tragedies in the future. The “Let My People Live!” Forum was organised by the European Jewish Congress (EJC), represented by the Chairman of the Board of Governors Mr. Moshe Kantor, the Polish Ministry of Culture and Yad Vashem, the Holocaust remembrance center in Jerusalem, under the patronage of the President of Poland Mr. Aleksander Kwaśniewski and under the auspices of the Secretary General of the Council of Europe Mr. Terry Davis. The Forum was a meeting place for victims and witnesses, as well as for young people from all over the world. The Forum was intended as a reminder to the world of the genocidal crimes of Auschwitz and other death camps, so that today’s generation will carry with it the lessons learnt from them. Participants at the Forum included survivors and liberators of the Auschwitz-Birkenau camps, as well as delegations of students and youth.

For the memory to stay vivid, it is vital to constantly cultivate it. It also requires imparting the truth to new generations through professional and consistent education. Sixty years after the liberation of Auschwitz-Birkenau, Europe continues to grapple with the Holocaust, as well as the anti-Semitism of the past and its new manifestations in the present. At the beginning of the 21 st century, Europe is challenged to preserve the memory of the Holocaust and to imbue the new generations with its lessons, as well as to combat the new rise in anti-Semitism.

That is why The Forum inaugurated the “The European Education Program for Teachers on the Holocaust and its Lessons”, prepared by the EJC, the Polish Ministry of Culture and Yad Vashem.

Education is a particular process. Its success depends on the teacher-pupil relationship – that is why the project focuses on training teachers, and on talking to young people in their own language. This program seeks to support European educators in this endeavour, encouraging their commitment to teach about this watershed event in world history. An academic core of experts in different fields (education, history, art, communication, and others) will serve as advisors to the program, contributing to its content and the exploration of new pedagogical methods.

The Torah (Bible) says that God “causes the seed of salvation planted by men to flourish”. This means that liberation is in our hands. And education programs on teaching the lessons of the Holocaust should become the key instrument for it. We have to sharpen our memory. Recovering memory gives new life. “The European Education Program for Teachers on the Holocaust and its Lessons” is the largest program of its type ever launched. Its success will ensure that the memory is indeed preserved and that new life will be given the chance to flourish.

0
KRAKOW, 27 JANUARY 2010 The third “Let My People Live!” International Forum to mark the day 65 years ago when the Red Army liberated the...
Read more
WHF