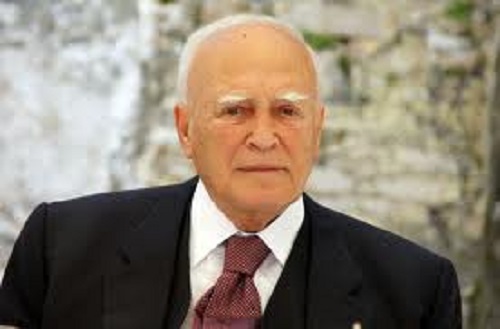 President of the Republic Karolos Papoulias on Monday received a delegation from the European Jewish Congress, led by its President Moshe Kantor and accompanied by the president of the Jewish Community in Athens Moise Constantinis. The EJC delegation had earlier also met Prime Minister Costas Karamanlis and Foreign Minister Dora Bakoyannis.

Greeting the delegation, Papoulias expressed his pleasure at the meeting and harked back to the thriving Jewish community in his native city of Ioannina that was almost entirely wiped out in the Nazi concentration camps of WWII, underlining the personal loss that this entailed.

“You understand that my childhood years I spent with classmates and friends, girls and boys, from the Jewish community and that cannot be forgotten,” he stressed.

The Greek president also expressed fervent support for the peace process in the Middle East, and hope that it would “finally reach a happy conclusion.” At the same time, he said that this would require a “certain bravery and a great compromise, a historic compromise; Both the state of Israel must exist in safe borders and a Palestinian state, which has much to gain from its cooperation with the state of Israel.”

According to an announcement regarding the EJC visit, it aims to persuade Greece’s leadership to introduce stiffer penalties for hate crimes and to voice concern over the rise of the right-wing, nationalist Popular Orthodox Rally (LA.OS) that has now entered the Greek Parliament. The delegation will also call for the country to become more involved in promoting education about the Holocaust and to “stem the growing tide of anti-Semitism and xenophobia”.