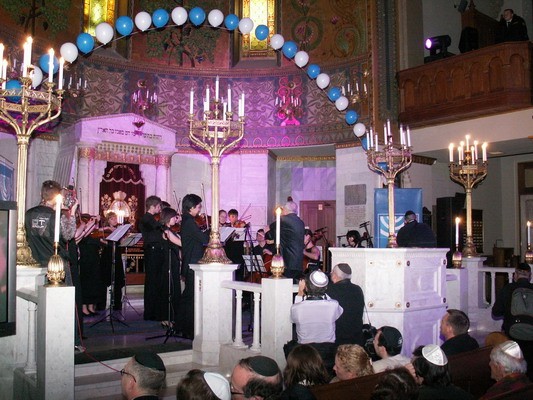 President of Israel Shimon Peres thanked Russian Jews for their contribution to the creation and development of this country.
“We remember that Russian Jews were present at the birth of the State of Israel. We remember the great contribution Russian Jews have made and continue making to the development of our country. We appreciate this contribution,” he said in his video address shown during the celebration that was held last Sunday in the Moscow Great Choral Synagogue and was devoted to the 60th anniversary of Israel.
According to the President, this Synagogue is the place where “the history of relations between the Jewish State and the Russian, then Soviet, Jewish community has its roots.” He also added that “the relations between strong Israel and the strong Diaspora are of mutual significance.”
“I would like you to know that your support is of great importance to the State of Israel. I want Israel to dwell in your hearts and thoughts just like you are in our hearts and thoughts,” Peres said.
He wished the Russian Jewish community peace, happiness and prosperity.
In turn, during his address at the celebration, Viatcheslav Kantor, president of the Russian and European Jewish Congresses, called on Jews to remember that the creation of the State of Israel “was the compensation paid by humanity for tolerating the Holocaust.”
He emphasised that it was the USSR who played a key role in the creation of Israel, when, during the dramatic 1947 UN vote, five countries of the Soviet block ensured the necessary two-thirds majority.
According to Kantor, “Russia has always been close to Israel, and it is particularly close to it today when every fourth Israeli speaks Russian.”
“For us, members of the Diaspora, the State of Israel is our greatest treasure. It is our guarantee that the Holocaust will never happen again. That is why we will make every effort to ensure Israel’s development,” assured Kantor.
The Great Choral Synagogue was chosen as the celebration venue because it historically played a role in the ties between Soviet Jews and Israel. It was here that Soviet Jews first met with Golda Meir, Israel’s first ambassador to the USSR. Refuseniks gathered here in the 1970s and 1980s, and one generation later, the Great Choral Synagogue was the site of acts of solidarity with the people of Israel.