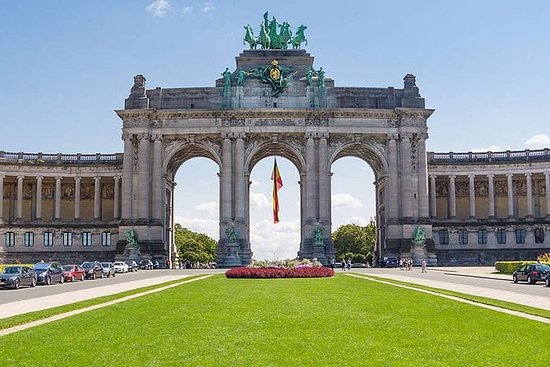 Following is the full text of the speech by Belgian Prime Minister Yves Leterme at an event organized in Brussels by the European Jewish Congress and CCOJB, the umbrella body of Jewish organisations in Belgium, on November 10, 2008, to commemorate 70 years since “Kristallnacht”, the anti-Jewish pogroms by the Nazis prelude to the Holocaust, and to promote tolerance throughout Europe.

“I’m very pleased to be here tonight and I‘m honoured with this prize, the Navigator of Jerusalem. This prize is a compass. That instrument of orientation is a symbol of man’s psychology and society’s reality. No man can follow his path and no society can find its destiny without orientation.

The north of the compass I received out of your hands is marked with the name of the old city of Jerusalem. The Navigator of Jerusalem reminds us of the origin of our European vision on man and society. The European culture is unthinkable and inexplicable without the spiritual, religious, philosophical, cultural, and scientific heritage it received from Jerusalem.

Not only Christianity, with its roots in the Jewish history and in the Jewish Bible, was born in Jerusalem and brought the Jewish idea of creative exploring of the world to Europe. Also many Jewish scholars directly contributed to, or laid the foundations for sciences, arts, and philosophies we like to call European. This direct input of Jewish thinking dates from the beginning of the Diaspora in Roman times and never stopped.

We may be grateful for what Jerusalem brought us. For it learned us that we must master the art of dispute and doubt in order to find truth and to progress in knowledge. Discussion and debate are Jewish to the core. This Navigator reminds us of the origin of the duty of tolerance and the right to differ. As we all know, you cannot discuss and debate, if you do not give the other the freedom to express his own ideas and to explain his own thoughts. The right to differ presupposes the duty of tolerance.

That brings us to the heart of the matter. When tolerance ends, the end of humanity begins. Today we remember – and that is the reason of our being here together – that seventy years ago the right to differ was put to an end and the duty of tolerance was replaced by a policy of intolerance.

On the night between the 9th and the 10th of November 1938 an enormous anti-Semitic pogrom spread in waves across Germany. Kristallnacht, as this night of Nazi-hysteria was called, can be seen as the beginning of the Holocaust.

As the president of the European Jewish Congress said, “we all need to constantly remind ourselves how it all began”. Unfortunately, intolerance is a recurring phenomenon. Therefore the lessons of Kristallnacht must be learned again and again. Forgetting paves the way for troops of intolerance to march again. And that we cannot tolerate.

That is the reason why I sent the following reaction to the Antwerp Jewish monthly Joods Actueel after the anti-Semitic statement of the president of the Iran Republic before the General Assembly of United Nations at the end of September: “”It is the duty of the political leaders to systematically refuse statements that are outrageous or hateful. The anti-Semitic views expressed by the Iranian President are totally unacceptable. I condemn those vigorously.”

Europe cannot turn its back on Israel. For Israel is linked to the history of Europe, for more than one reason. We cannot speak about the foundation of the Jewish State without mentioning the Holocaust. There is more, the dream of a new Eretz Yisrael was born in Europe, in the hearts and minds of Theodor Herzl and his followers in the 19th century. And since many centuries, in many thousands of European Jewish households, Pesach, the Jewish feast of Easter, ends with the wish: “Next year in Jerusalem!”

When Martin Buber received the Peace Prize of the Frankfurter Buchmesse in 1952, he made a plea for reconciliation with these words: “Versöhnung geschieht durch Erinnerung (Reconciliation takes place by remembrance)”. Many years later, the German theologian Dorothée Sölle said the same thing in her own way: “Collective remembrance is the secret of liberation”.

The Holocaust shook the foundations of civilization. That means that we never can take civilization for granted. To ‘civilize’ is something we must do, we must work on. Civilization begins with education. In 1998 the Task Force for International Cooperation on Holocaust Education, Remembrance and Research was set up, an initiative of the Swedish Prime Minister Göran Persson. Belgium joined this international task force. Membership allows Belgium to benefit from the network of researchers and educators, and from exchanges of good practices. By joining this international Task Force, Belgium confirmed its commitment to remembrance work as well as its commitment to fight racism and anti-Semitism. In Malines, the ‘Kazerne Dossin’, the location where during the war the Belgian Jews were put on the trains to Auschwitz and the other extermination camps, will become Memorial, Museum, and Documentation Centre on Holocaust and Human Rights.

Why are we doing this? Because we never can take tolerance and respect, the core values of civilization, for granted. Only when we know what the roots of anti-Semitism and intolerance are, we can avoid the return of what Primo Levi once summarized as follows: “The conviction that any stranger is an enemy, starts a process of dehumanization at the end of which we find a concentration camp.”

In his autobiography Ich nicht, the former publisher of the Frankfurter Allgemeine Zeitung, Joachim Fest, tells about his youth in Nazi-Germany. His father taught him again and again: “Even when everybody accepts barbarism, I never will!” Fest writes that he took a solemn pledge to never disappoint his father. He too said: “I, never!”, and he did so. Through education and remembrance work we hope that our future generations can say and do the same: “We, never!”

Promoting tolerance is one of the core businesses of education, especially on a continent that is more and more a multicultural and multi-religious society. The compass of The Navigator of Jerusalem has Jerusalem as the focal point. The old city of Jerusalem, in the fullness of its meaning, is the north from which every place is situated. Jerusalem is a holy city of the three monotheistic religions, Jewish, Christian, and Muslim. Let it therefore be a symbol of the tolerance towards which we must be oriented.