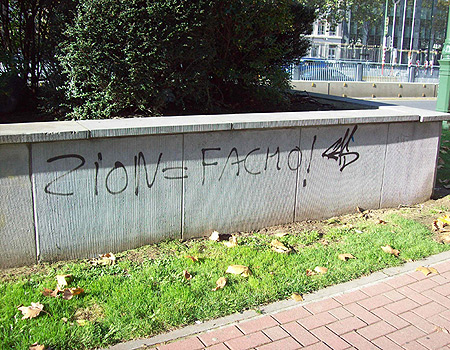 The global economic crisis, which is beginning to be clearly felt across Europe, has brought with it another concerning phenomenon – a rise in anti-Semitism and anti-Semitic assaults throughout the continent.

This week a pig’s head was hung on a Magen David at the entrance gate to the Jewish cemetery in the city of Goethe in East Germany, with a banner saying “Six million lies” placed alongside it. In other countries synagogue windows were smashed, Jews were attacked on the streets and calls not to buy from Jews were made.

Since the beginning of the year, 800 anti-Semitic incidents have been registered in Germany, a rise of dozens of percents compared to last year. The head of the Jewish community’s council in the country said that not a week goes by without a Jewish cemetery being desecrated.

In Hungary, one of the countries which were particularly affected by the financial crisis, the rise in anti-Semitism has been dramatic and the number of hate crimes against Jews grew by dozens of percents this year, according to Israel’s Ambassador to Hungary Aliza Ben-Nun.

When the 70th anniversary of Kristallnacht was marked last week, the windows of a synagogue in Debrecen, the second largest city in the country, were smashed. During the High Holidays, bands of uniformed members of Hungary’s extreme right gathered around synagogues in Budapest and intimidated shul-goers by their presence.

“Such violent incidents are becoming a routine thing,” Ben-Nun said. “The members of the far right are becoming more and more confident. There are many more incidents of graveyard desecration, spraying anti-Semitic graffiti and verbal and physical assaults.”

The increase in violent attacks against Jews, as well as immigrants, can be seen throughout Central Europe. Three men were arrested in Prague in the beginning of the week on suspicion they threw rocks at a Jewish resident. In Basel, Switzerland, a sign was posted on the window of a kosher grocery store reading, “Swiss, protect yourselves, don’t buy from Jews.”

Was Economic crisis the trigger?

Can the growth in anti-Semitism be attributed to the economic crisis? “It’s too early to give a scientific answer,” said Prof. Yehuda Bauer, the scientific advisor of the Yad Vashem Holocaust Memorial Museum. “But I can say that once there is an economic crisis, the anti-Semitic images of the greedy, exploiting Jew surface. This is a regular pattern, according to which at a time of financial hardship, anti-Semitic stereotypes begin to put down roots.”

The Anti-Defamation League has recently published a report indicating that there has been “a dramatic upsurge in the number of anti-Semitic statements being posted to Internet discussion boards devoted to finance and the economy.”

According to Serge Cwajgenbaum, secretary-general of the European Jewish Congress, “There has indeed been a general rise in anti-Semitic attacks in all of Europe in recent months. It’s still early to link it to the financial crisis, but the attacks are certainly more violent today than hey used to be.”