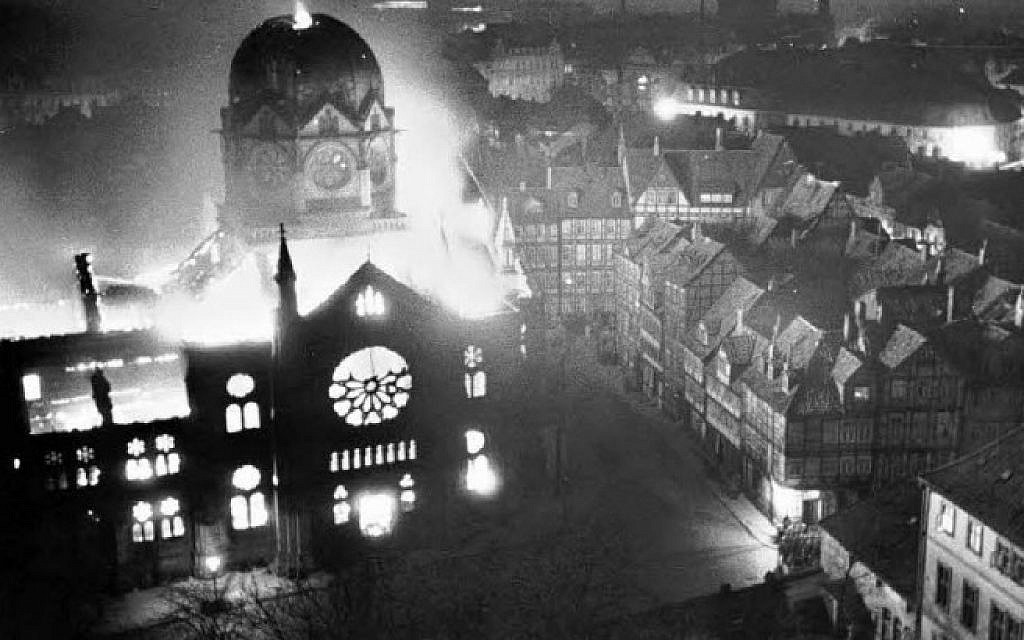 A European gathering commemorated 70 years since the 1938 pogrom that marked the start of Hitler’s organized attack on European Jewry. Some see troubling parallels to current events.

Standing next to the ark of the Great Synagogue of Europe, in the center of Brussels, Arthur Schneier, 78, recalled the sounds of breaking glass and the smell of the raging fires as the fire brigade stood by, doing nothing, in his native Vienna.

Schneier, now rabbi of the Park East Synagogue in New York, was an 8-year-old boy in Austria, which had recently been annexed to Nazi Germany, when he witnessed Kristallnacht, the 1938 pogrom that marked the beginning of the organized Nazi attack on European Jewry.

On November 9 this year, he joined with other rabbis and dignitaries to mark the 70th anniversary of Kristallnacht at one of several commemorative events, organized by Dr. Viatcheslav Moshe Kantor, president of the European Jewish Congress (EJC) and Aleksander Kwasniewski, former president of Poland and president of the recently formed European Council of Tolerance and Reconciliation (ECTR).

“Kristallnacht must be remembered again and again,” declared Belgian Prime Minister Yves Leteme at the closing event, summing up two days of commemoration proceedings in Brussels, which began with the service at the central synagogue of Brussels, a venerable and sober 130 year-old building that was dedicated as the Great Synagogue of Europe five months ago, and culminated in a ceremony in the European Parliament. The week-long series of European gatherings for “tolerance and reconciliation,” organized by the ECTR, went on from Brussels to the Czech Republic and then to Russia.

Survivors recounted the pogrom night of November 9-10, 1938, in Germany and German-controlled lands, during which over 90 Jews were murdered, tens of thousands deported to concentration camps and the shattered windowpanes of hundreds of synagogues and thousands of Jewish-owned shops set aflame carpeted German streets, giving the night its name of Kristallnacht (The Night of Broken Glass). The Jews were then punished still further by the Nazi government, which ordered them to pay millions of marks to repair the damage.

Rabbi Yisrael Meir Lau, the Chief Rabbi of Tel Aviv, who survived the Buchenwald concentration camp as an 8-year-old child, noted in the ceremony at the European Parliament that there was nothing spontaneous about the pogrom – it was premeditated in cold blood by “people who loved music and culture, but at the same time were murderers.”

“We are worse off now than after World War II, because of shortness of memory,” reflected Kantor. “The number of neo-Nazis today in Europe is greater than the number of Jews. There is a banalization of the Holocaust. But it is not enough merely to worry. “The tragedies of the past can be a base for moving forward to face the challenges of the 21st century in attaining tolerance.”

Toward that end, the European Parliament has drafted a new European convention on tolerance, consisting of 39 articles, including a list of nine specifically anti-Semitic acts that are to be punishable by law, among them, acts of violence against people, the denial or trivialization of the Holocaust and the desecration of religious sites. The draft contains provisions calling for the eradication of all manifestations of intolerance, including incitement to racial violence, racist and xenophobic acts, and even “aggressive nationalism.” Special attention is also given to migrant workers, who have been victims of racism in Europe. The parties to the draft convention -the member states of the Council of Europe – are called upon to examine the conformity of their constitutions and laws with the efforts to eradicate intolerance listed in the convention.

According to Kwasniewski, the new initiative will include not only prohibitions but also positive incentives designed to introduce an element of “competitiveness in producing tolerance.” ‘There will be periodic publications – of a tolerance ‘White Paper,'” says Kwasniewski, “which will highlight acts successfully promoting tolerance,” The ECTR will also be awarding an annual Medal of Tolerance, with the first such decoration awarded to King Juan Carlos I of Spain for his “lifetime achievements in promoting tolerance and democracy.” (The king did not attend the ceremonial dinner in Brussels in which the award was to be delivered to him.)

In what was perhaps a sign of the spirit of tolerance, EJC officials noted that several Arab ambassadors to the European Union. including representatives from Egypt, Saudi Arabia, Kuwait, Jordan and Morocco, attended the European Parliament ceremony marking 70 years since Kristallnacht, which featured speeches and testimonies regarding Jewish suffering during the Nazi era. One participant, Dr. Mahmoud Karem, Egypt’s Ambassador to NATO, told The Report that “no Arab country has ever denied the Holocaust, It was a terrible event in history that deserves to be remembered. [Iran’s President] Ahmadinejad may deny it, but Iran is not an Arab country.”

The threat of Iran was repeatedly raised at the Kristallnacht commemoration in Brussels, especially by Kantor who also established and finances the Luxembourg Eorum, a panel of 43 experts on world nuclearization and sees a parallel between the events of the 30s and current events. Speaking at a press conference, Kantor pointed out that Adolf Hitler used Kristallnacht as a testing ground to gauge public reaction in Germany to attacks against Jews, and was encouraged by the German public’s acquiescence. The tragedy of the SS St. Louis, a ship carrying 900 Jews attempting to flee Nazi Germany in May 1939 that was turned away from several ports, including Miami and Havana and forced to return to Europe, was “a further test of world reaction regarding the fate of the Jews, which the world failed,” says Kantor. He decried the fact that “thousands of European companies continue business as usual” with contracts worth $100 billion with Iran, saying that the world is again failing to confront dangerous dictators.

“Today we sec six thousand companies collaborating with rogue states, which work to create nuclear weapons disregarding international agreements and treaties,” continued Kantor. “The world community and national governments tolerate such collaboration. We must remember that for these lessons of criminal intolerance mankind paid the price of 50 million lives, among them 6 million Jews.”

But why were the EJC and ECTR holding Kristallnacht memorial services in Belgium, which was not under German occupation in 1938, rather than in Germany, the site of the Kristallnacht pogrom? A central and separate ceremony in Germany, featuring German Chancellor Angela Mcrkel making a strong statement that tolerance must be “neither neutral nor passive,” was conducted in Berlin’s Rykestrasse Synagogue, itself restored after being destroyed on Kristallnacht. Kantor stresses that Brussels is a fitting place to launch a tolerance initiative on the 70th Kristallnacht anniversary as it is the capital of united Europe. The initiative is intended to bring together a “stable triangle” of major world powers – the United States, Russia and the European Union – and there is therefore great significance to the Kristallnacht ceremony being conducted in the heart of the European Parliament building.

A source within the EJC, who requested anonymity because he was not authorized to speak to the press, however, told The Report that Kantor initially wanted to conduct the main EJC commemoration in Nuremberg, Berlin or Strasbourg in Germany, but that these venues were vetoed by the Zentralrat, the Central Council of Jews in Germany. The rebuff to Kantor is apparently a reflection of continuing tensions between some European Jewish communities and the EJC president. The Jewish communities of Germany, France, Austria and Portugal suspended their EJC memberships in the spring of 2008 after expressing dissatisfaction with Kantor, a 54-year-old Russian “oligarch” who made a fortune in metal commodities after the fall of the Soviet Union. Kantor is the first Eastern European to lead the EJC since he assumed the position in June 2007. The EJC members who suspended their membership did so in protest over what they considered to be an illegal move on Kantor’s part in the convention of an “extraordinary” EJC general assembly which extended his term of office from two years to four years.

Another source of tension at the Brussels gathering was sparked by an EJC statement on the election of Barack Obama as president of the United States the week before. At the Brussels commemoration, Kantor praised the election of an African-American as U.S. president as an inspiring example of the tolerance which he is promoting. But some observers felt that the EJC was unduly circumspect about Obama in a statement it had issued three days earlier in response to a Jewish Telegraphic Agency query. The statement said “the EJC, as a Jewish organization, hopes that Mr. Obama’s election will have positive repercussions in the Middle East and in Israel. However, due to the current world economic crisis, the political and military crisis that the U.S. finds itself in (and its need to prioritize its foreign policy agenda) and the complexity of the political situation in the Middle East, we feel it would be premature to state that we are convinced of said repercussions.”

Rabbi Marc Schneier of The New York Synagogue (son of Rabbi Arthur Schneier, who also spoke at the Kristallnacht memorial service), who was a speaker at the Democratic National Convention and was closely allied with the Obama campaign, pointed to the EJC statement as evidence that Obama is misunderstood by the European Jewish leaders.

‘The European Jewish leadership fails to appreciate the depth of .the connection between the [American] Jewish community and Obama,” Schneier, who is active in efforts to strengthen ties between Jewish and African-American communities, told The Report. “The Jewish vote was overwhelmingly for Obama, and just look at whom he picked for the second-most important position in the U.S. after the president, the Chief of Staff of the White House, Rahm Emanuel – a concrete expression of the Black-Jewish relationship.”

Schneier also reacted to an EJC statement that expresses hopes for a firm American stance against a nuclear Iran, a matter the organization said was “too often… left on the sidelines,” by saying that “they are wrong if they regard Obama as misguided with respect to the Iranian threat. Obama believes in engagement but has made it clear that he will not tolerate an Iranian bomb ”

Kantor asserts that Iran is already in possession of what he describes as “an experimental nuclear bomb,” along with at least 20 kilograms of weapons-grade uranium – a stronger and far more alarming claim than any made by government intelligence agencies. Most official assessments speak of Iran as still being “several years” away from the construction of a working bomb. But Kantor claims that in his role as president of the Luxembourg Forum, he has received information on Iranian advances in bomb construction.

When asked by The Jerusalem Report to elaborate whether by “an experimental bomb” he means a nuclear weapon ready and available that could be detonated,in a test at any time, Kantor responded: “Yes.” Then why is this not commonly mentioned in the media? “Because people prefer to be blind,” says Kantor. “Everyone knows about this, including Obama.”

The Brussels events celebrated tolerance and those who gathered in Brussels to mark 70 years since Kristallnacht are hopeful that a more tolerant world is achievable.

“We must be unrelenting,” says Hans-Gert Pottering, president of the European Parliament. “The very fact that we are commemorating the pogrom [of Kristallnacht] in a now peaceful and united Europe, in the European Parliament in a hall named after Yehudi Menuhin has special significance -the human soul cannot and will not be beaten.”