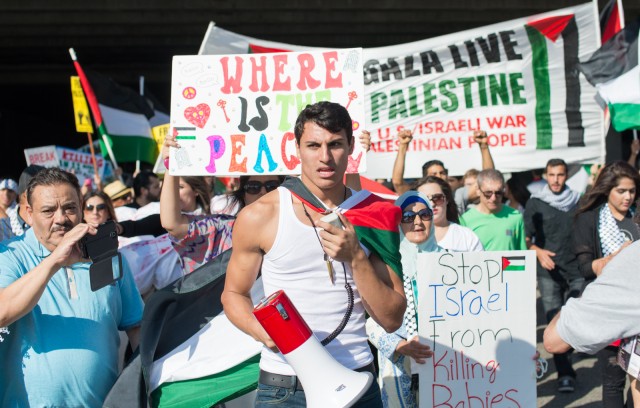 Police prevented an unauthorised pro-Palestinian rally near the Jewish quarter of Antwerp on Wednesday and took 57 people into custody, a Belgian newspaper said.

De Standaard said on its online edition that a group of youths of immigrant origin were told by text message to join a rally against Israel’s war on Hamas near the main railway station in the Flemish port city.

But as they arrived for the 3 pm (1400 GMT) demonstration, they were met by a large number of uniformed and plainclothes police.

Would-be protesters willing to leave were allowed to do so, but 56 were taken into custody for refusing to go, while one man was arrested for possession of a weapon, the Belga news agency reported.

Police later chased a number of youths from a nearby shopping centre.

“We played cat and mouse for a while, but we had to bring an end to it,” police spokesman Sven Lommaerts told De Standaard. Another showdown could take place on Saturday, when the European Arab League — a group founded in Antwerp that campaigns for the rights of Arabs and Muslims in Europe — has requested to hold a similar rally.

In Brussels, about 300 people joined a pro-Israel demonstration outside the Iranian embassy called by the European Jewish Congress, shouting such slogans as “Israel will live” and “Hamas terrorist, Iran terrorist.”

“It is vital that we show our support and our solidarity towards Israel,” said Moshe Kantor, president of the congress, adding that the Jewish state was on the “front line” in a global struggle against terrorism.

The Belgian interior ministry said Tuesday that police have arrested around 95 people — 65 of them aged between 12 and 14 — over problems at pro-Palestinian rallies since Israel launched its assault on December 27.