In Brussels, Around 1,000 People Express Support For Israel’S Action, Denounce Terrorism Of Hamas And Iran 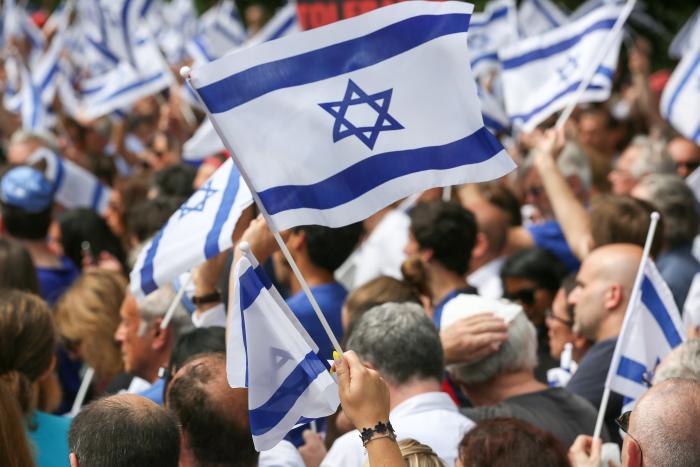 Around thousand people waving Israeli and Belgian flags demonstrated Wednesday evening in front of Iran’s embassy in Brussels to show their support for Israel’s action against Hamas in Gaza and express solidarity with the Israeli and Palestinian civilian populations.

“The war in Gaza is not only a war between Israel and the Palestinian terrorism but also an Israeli-Iranian war,” Joel Rubinfeld, head of the CCOJB, the umbrella group of Jewish organizations in Belgium, organizer of the demonstration, told EJP in explaining why the group choose to rally in front of Tehran’s embassy.

“Iran is the university which teaches the ideology of violence, exclusion, terrorism. Iran’s local branch, Hamas, implement this ideology,” he added, denouncing the fact that a democratic state, Israel, and Hamas are put on a equal footing .

“The Iranian regime and its armed arm in Gaza, Hamas, are responsible for what is happening in the region. They are responsible for the sufferings of the Israeli and Palestinian people. Israel has the right and the duty to protect its citizens against missiles launched daily on Israeli cities, ” Rubinfeld told the crowd.

“We support Israel, Hamas terrorist, Iran accomplice, 8 years of shelling enough, Israel will live,” read the banners deployed in a freezing cold by demonstrators before a cordon of police.

They denounced the “media disinformation” in reporting the Gaza events.

Chanting peace songs in Hebrew, demonstrators also called for the release of Gilad Shalit, the Israeli soldier held hostage by Hamas in Gaza since 2006 after being captured by Palestinian groups.

“I came here to show my solidarity in these difficult times and express my annoyance about statements made by a great number of Belgian politicians,” André Miodezki, a Brussels Jew, told EJP. “I believe that they are acting against a positive evolution of the Mideast conflict and of the peace between Israelis and Palestinians.”

Among the demonstrators, Denis Ducarme, a Belgian Liberal MP, stressed in his speech that “any country has the right to defend itself.”

Ducarme, who was to travel to Israel on Thursday and visit Sderot, the southern Israeli city repeatedly targeted by Hamas rockets from the Gaza Strip, warned against importing the Mideast conflict in Belgium. He also called the Belgian Jews to maintain relations relations with the Arabic-Muslim community in the country despite the situation.

A spike of anti-Semitic incidents in Belgium, linked to the Gaza conflict, including attacks against several synagogues and a Jewish school, have sparked concern within the Belgian 30,000-strong community and led the government to reinforce security measures around Jewish institutions.

The Belgian Jewish organisations have requested a meeting with Interior Minister Guido De Padt to insist on action to protect the community.

“We demand to know from the government that all necessary measures be taken to investigate, bring to justice and punish those responsible for these anti-Semitic acts,” said Joel Rubinfeld.

Wednesday’s demonstration in the Belgian capital is part of a series of rallies launched by the European Jewish Congress (EJC) and its affiliated communities across Europe in support of Israel’s actions against Hamas in Gaza. After Brussels and Paris, demonstrations will be held in the next days in Amsterdam, Rome, London, Munich, Frankfurt, Berlin and Vienna.

“It is vital that we show our solidarity and support for Israel at this time. Israel is on the front lines of a battle that stretches all over the world whilst Hamas is part of a larger, international terrorist network, with links to Teheran,” explained Moshe Kantor, president of the European Jewish Congress, in a statement.

The EJC has also planned a series of diplomatic and political meetings with European governments and in particular the European Union. These meetings will seek to explain the Israeli defensive position and discuss the alarming rise of anti-Semitic incidents that are taking place in several countries.

“The EJC condemns these unacceptable acts of violence and vandalism and welcomes French President Nicolas Sarkozy’s remarks, stating that France would not tolerate violence linked to the Gaza crisis,” the pan-European Jewish body said.