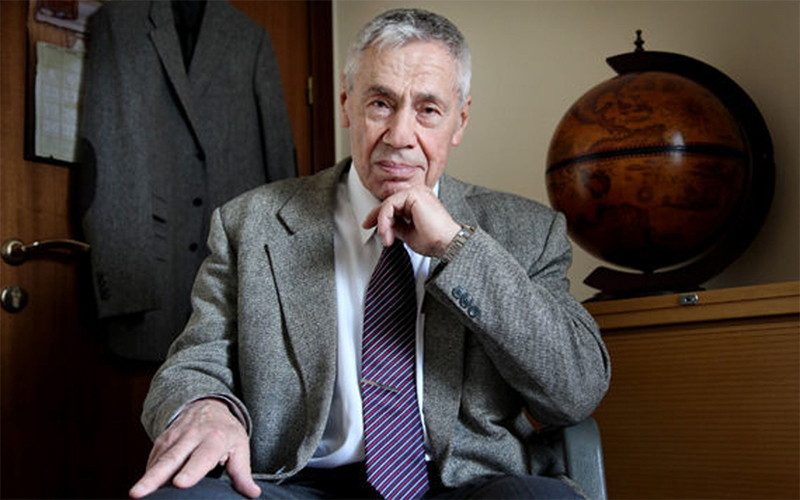 In an interview with the IzRus website during a visit to Israel, Russian expert on Iran’s nuclear program Vladimir Dvorkin proposed a full-scale economic embargo of Iran and discarded pinpoint strikes on Iranian nuclear facilities by the Israeli air force as ineffective.

Dvorkin, who is a professor and a retired Major-General, talked with reporters at a conference held last week at the Herzliya Interdisciplinary Center. In his speech at the conference, Dvorkin pointed out possible ways to solve the problem of Iran’s nuclear program. In Dvorkin’s view, a solution can only be reached by means of an economic blockade or the use of force. He expressed doubt that the new U.S. president will be able to solve the problem through direct negotiations with Iran. The Russian expert emphasized that embargo imposition through UN resolution is unrealistic, and this leads the situation with Iran’s nuclear program into deadlock.

Professor Dvorkin issues frequent statements about the “nuclear Iran” problem, citing the limited moves available to the West. In his opinion, an Israeli air strike on Iranian nuclear facilities (alone or with U.S. support) will unite the Iranian people in their support of the ayatollahs’ regime. Dvorkin says that such a scenario would make people ready to sacrifice a lot in order to restore the demolished facilities and restart the nuclear program. Although he acknowledges that all of the possible ways to stop Iran are bad, Dvorkin believes that it would be even worse to have a nuclear state emerging at the junction of the Middle East, the Caucasus, Central and Southern Asia.

Before his departure from Israel, Dvorkin agreed to do an interview with the IzRus web-site.

Professor Dvorkin, are you expressing your own opinions, or…?

This is my position and it’s mine alone.

No, such people are few but they exist.

Everyone takes that position: the IAEA, the Six, including the United States – everyone is doing nothing but talking. This plays only to the benefit of the Iranian leadership, which wins time to continue developing its nuclear program, including the military aspect.

What happens if Ahmadinejad loses the next election?

I don’t specialize in Iran’s domestic politics, but if he loses we won’t be hearing such harsh rhetoric and criticism aimed at Israel or statements concerning the destruction of Israel. Everyone in Iran supports the idea of uranium enrichment – it is their national idea, and that is what they will continue doing. Not everyone there goes into the details – why is this process going on and where will it lead. So the election will not change Iran’s real policy; the declarations may change but not the real policy.

You mentioned an economic blockade of Iran. Is that possible today?

Of course it is, but only if it is implemented not by a single country, but by all of them together. Otherwise it will not be a blockade. It’s probably not possible under a UN Security Council resolution, but if the U.S. and Middle Eastern countries agree on a blockade, it could be done.

The Russian navy is hurrying to restore Soviet naval bases in Syria. Could this aggravate relations between Russia and Israel?

No, I don’t think so. Russia is not interested in hurting its ties with Israel.

How would you describe the essence of Russia’s interests in our region?

On the one hand, Russia has economic ties here, and on the other hand, Russia’s leadership plans to expand its sphere of influence and act independently in this region. .

Does this include arms deliveries to Hezbollah through Syria and Iran?

I believe that the handover of Russian arms to Hezbollah is absolutely unacceptable judging by normal logic. I think that Russian leaders never intended to supply arms to Hezbollah. But we have to define what we mean by “Russian arms.” If we’re talking about Kalashnikov assault rifles, many countries produce them. As far as Hamas is concerned, they produce Qassam rockets themselves, and the Grad missiles they used in their attacks have nothing to do with Russia. Hamas can only get Russian weapons through Syria or Egypt, and I don’t know what Russian weapons have been supplied through those countries over the past two decades.

Vladimir Zinovyevich Dvorkin is a retired Major-General, professor and chief research associate at the Russian Academy of Sciences’ Institute of World Economics and International Affairs.

Dvorkin was born on January 12, 1936 in Leningrad. After graduating in 1958 from the Higher Naval College, he worked at the State Central Sea Range. He participated in the testing of the first Russian submarine nuclear rocket launcher, as well as in the first sea launches of ballistic missiles.

Major-General Dvorkin is one of the authors of program documents on the Strategic Missile Forces and Strategic Nuclear Forces. For many years he participated as an expert in the preparation of such treaties as SALT-II, INF, START-1, START-2. He also made a substantial contribution to the formation of Soviet and Russian positions during negotiations on limiting and reducing strategic offensive arms.

Dvorkin has received the following orders: “For Service to the Fatherland” (IV degree), “For Military Merit,” “Order of the Red Banner of Labour,” “Red Star Order” and numerous medals.