Poettering: ‘We Will Have Difficult Times If There Is No Mideast Peace’. The President Of The European Parliament Met The Head Of The European Jewish Congress In Brussels 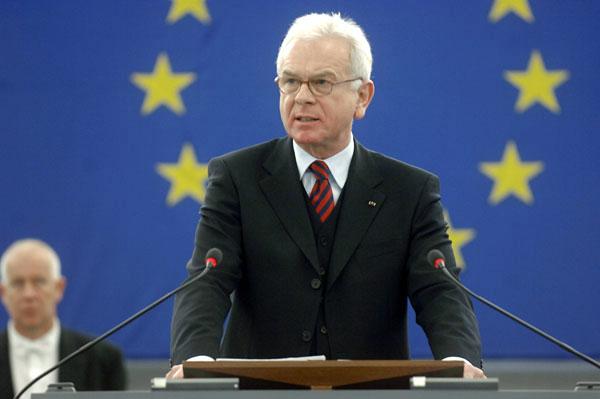 The President of the European Parliament, Hans-Gert Poettering, supports the idea of a resolution strongly condemning the wave of anti-Semitic incidents in Europe and is in favour of organizing an interfaith and intercultural symposium on tolerance in Europe.

But he told the President of the European Jewish Congress (EJC), Moshe Kantor, during a meeting on Wednesday in Brussels, that “if there is no peace in the Middle East we will continue to have difficult times”. “We need a solution there,” he said.

“The priority is a two-state solution between Israel and the Palestinians,” Poettering said. “If we miss this opportunity we will have tough times with the Arab world,” he said.

Poettering, who will visit next week Israel, Gaza and Ramallah at the head of a delegation from the Euro-Mediterranean Parliamentary Assembly (EMPA), stressed however that “behavior of different parties in the Middle East is never a reason for anti-Semitism or xenophobia whatsoever”.

‘But I can only say that we need a solution and we will do our utmost to support President Obama to find a solution together with the EU, the UN and Russia”.

He was responding to EJC president Moshe Kantor who raised concern about the dramatic increase of racism, xenophobia and anti-Semitism in Europe, especially in the wake of the economic crisis.

“The situation in Europe is dangerous again, not only for Jews, for all Europeans,” he said.

The EJC, which represents Jewish communities in 40 European countries, recently expressed its “extreme disappointment” with the European Parliament’s “inaction and refusal to openly denounce” the anti-Semitic attacks that took place throughout Europe during the last two months.

“40 percent of Europeans consider Jews and foreigners of being responsible for this crisis,” Kantor told the EU parliament president, before pressing the assembly to pass a resolution on this topic during his next session and suggesting the organization at the end of March, jointly with the parliament, of a symposium on tolerance with the participation of experts, political and religious leaders and NGO’s.

“Europe is not a tolerant continent anymore because of the economic crisis,” he said.

Poettering said however that while he supports the idea of such a resolution on anti-Semitism, it was up to the main political groups of the parliament – the Christian-democrats, the Socialists and the Liberals- to draft a text.

Kantor was to meet later on Wednesday with European Commissioner Jacques Barrot, in charge of justice, freedom and security, to whom he will present the idea of including a ‘task force’ with representatives of European Jewish communities within the Vienna-based Fundamantal Rights Agency (FRA).

This influential independent Vienna-based body of the European Union replaces the former European Monitoring Centre on Racism and Xenophobia and is providing expertise to EU member states on fundamental rights issues.

European Jewish Congress President Moshe Kantor said that anti-Semitism levels unseen since World War II had “nothing to do with Middle East things.” “All these problems started before Gaza and continued afterwards,” he told The Associated Press.