Anti-Semitism Down In Numbers, Up In Intensity 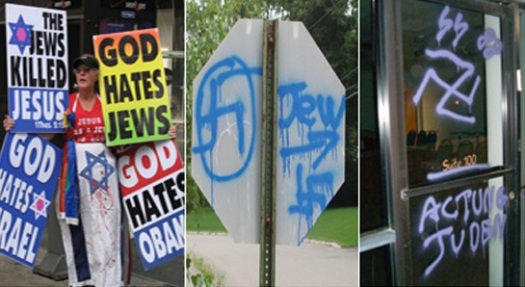 As the Durban II anti-racism conference convenes with its apparently anti-Semitic agenda, and on the eve of Holocaust Memorial Day, the European Jewish Congress and Tel Aviv University have jointly released new survey findings regarding worldwide anti-Semitism.

The survey shows that anti-Semitism rose in 2008 in countries such as the U.S., Canada, Germany, Belgium, Lithuania, Switzerland, Hungary and Italy. Anti-Semitic incidents around the world dropped 11 percent in the course of 2008, but spiked again in January 2009.

A General Rise in Atmosphere and Incidents

In addition, an anti-Semitic atmosphere of threats, insults, graffiti, and slogans appeared to be on the rise, according to the report. In general, it stresses, “Despite a decrease [in anti-Semitism] in certain years, such as 2005 and 2008, the level of the overall number of incidents [this decade] has never returned to that of the 1990s, so that the general tendency is one of a continuous rise.”

The economic crisis which began in the summer triggered anti-Jewish reactions, the report states, most notably in eastern Europe and the Arab world, but not violent activities.

Some 560 violent cases, and 170 attacks on individuals occurred in 2008 worldwide, down from 632 and 255, respectively, the year before. The use of weapons declined, while other forms of violence, such as arson, remained at the same level. In addition, figures for vandalizing of schools, synagogues, cemeteries, community centers, monuments, and private property remained relatively unchanged.

Just last week, swastikas were found scrawled on a French memorial to Jews deported to concentration camps during the Holocaust. The vandalism occurred at a site northeast of Paris representing “the memory of the deportation and extermination of France’s Jews” – tens of thousands of whom were sent through the transit camp there to concentration camps during the Nazi occupation of France.

This past January, during and after Israel’s Operation Cast Lead against the murderous Hamas terrorist organization, 250 anti-Semitic incidents of all types were counted, compared to 35 during the same month in 2008. An estimated 1,000 incidents occurred in January 2009 around the world, including nearly 90 violent cases – three times more than in January 2008.

Abusing the Holocaust to Attack Jews

Anti-Semitic expressions evident at the beginning of 2009 were not classic stereotyping of Jews and Israelis, but rather abuse of the Holocaust as a political tool against Israel. The analogy of Israelis/Zionists/Jewish supporters of Israel with Nazis became almost an axiom, the report states. The equation “Magen David = swastika” is intended to underline that just as Nazism has no right to exist, so too should the Jewish state and its supporters be eliminated.

“This equivalence has caught on easily,” the report states, “because of widespread ignorance, especially among younger generations, regarding the Holocaust and its uniqueness, as well as the history and politics of the Middle East crisis; because of the lingering memory of the Holocaust that generates fatigue of the Jew as the ultimate victim; [and] because of the desire of youngsters and left-wingers for a symbol of evil to combat and for a cure to the world’s maladies.”

In addition, the report blames the fact that “radical Muslim propaganda, which efficiently enhances the image of the child-killer Jew… has turned anti-Zionism into anti-Semitism.”

“There is little doubt, then,” the report concludes, “that the anti-Zionism of 2009, which is being expressed with frightening hatred and intensity, serves as a focal point for various parties and is essentially anti-Semitic; moreover, its expression is different in nature from other protests against other states in conflict. “

Dr. Moshe Kantor, President of the European Jewish Congress, the umbrella organization for Jewish communities in Europe, noted the “dangers of rising global anti-Semitism and the cynical use of Jews and the Jewish State as convenient scapegoats for the world’s ills.”

“The Durban II conference is a snapshot of the world at large,” Kantor said. “It is taking place against the backdrop of a global rise in anti-Semitism fueled by the economic crisis. The hate expressed towards Israel and the Jewish people is stoking the embers of long-simmering anti-Semitic canards and Jewish blood libel… It is only fitting that Iran’s leader Mahmoud Ahmadinejad, one of the world’s foremost deniers of the Holocaust and a sponsor of international terror, will be participating in the Durban conference.

“Just yesterday, Ahmadinejad charged that ‘Zionists seek to take control of the world’s political and media centers in order to loot and belittle nations.’ Such statements bring to the surface old anti-Semitic notions of Jewish control of the world economy. The countries participating in this abomination should be ashamed,” he said.