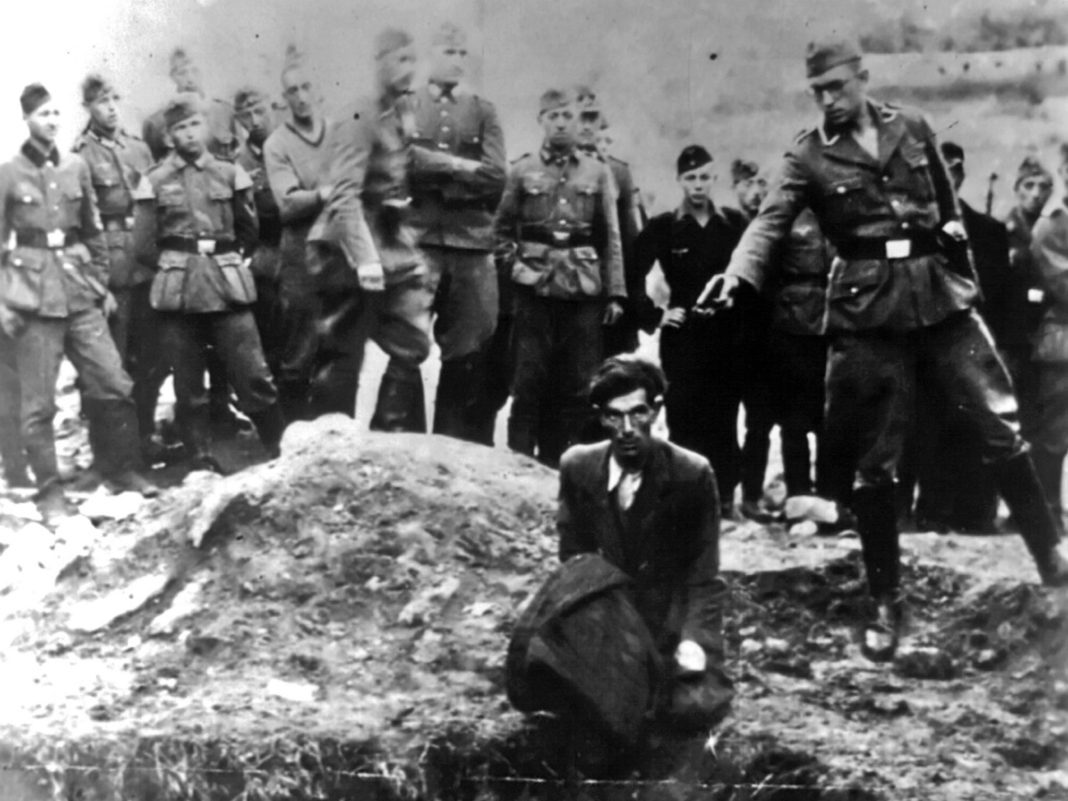 In August 1941, German sailor Reinhard Wiener saw something he was unlikely to forget. Stationed in Latvia, Wiener was walking with a fellow serviceman toward the beach, when a soldier came running toward them. “He said we shouldn’t go on because a horrible thing was happening on the beach,” Wiener recalled. “We asked what was going on, and he said yes, they’re shooting Jews down there.”

Wiener recounted the story in an interview in 1981, published on a new Yad Vashem Holocaust museum Web site documenting the annihilation of the Jews in the Nazi-occupied areas of the Soviet Union. Trained as a cameraman, Wiener carried a Kodak 8mm camera that day.

“I decided to go on anyway, so I could document it,” he said. Wiener reached a line of soldiers standing along a trench. A truck full of people soon arrived. “The guards shouted something I didn’t understand and the people in the truck started jumping out. I saw they were wearing yellow badges.”

The Jews were ordered to run to the trench and stop. “They were told to stand with their backs to the firing squad. I think at that point they understood what awaited them, because just below they could see a layer of bodies covered with sand. The firing squad was then immediately ordered to step forward and shoot.”

Wiener’s two-minute film is the only filmed evidence of one of the worst stages in the annihilation of European Jews, the murders in the Soviet Union.

Despite decades of research, this chapter of the Holocaust remains one of the least documented. The last three years have seen a vast project by Yad Vashem to shed some light on the era. The project, “Story Untold,” was sponsored by the president of the Russian Jewish Congress, Moshe Kantor. It examines 101 killing sites in 51 areas in Lithuania, Latvia, Belarus, Russia and Ukraine, some of them previously undocumented. Jews were shot dead by Germans and local collaborators.

“The Eastern area is one of the largest gaps in our knowledge,” says Prof. David Bankier of the Hebrew University, who heads the International Institute for Holocaust Research at Yad Vashem.

“The project’s uniqueness is that it deals with the smaller killing sites, not the large ones like Babi Yar, of which so much has already been written. We are dealing with sites about which there is very little information. Not many eyewitnesses remain, and we even lack basic information like numbers and the conduct of Jews and the local population.”

The liberation of the region by the Soviets spurred inquiries examining the events. “As soon as an area was liberated, the NKVD [secret police] would come and investigate – what happened, who cooperated. It’s fascinating material,” Bankier said. The reports, uncovered after the fall of the Soviet Union, formed an important part of the research.

The researchers compared the NKVD reports to those made by the Germans, and mapped the sites through the GPS satellite navigation system.

Yad Vashem also looked into the composition of the killing units, organized by the Germans but including many local residents. “Our estimate is 10 locals to every German,” said Bankier.

“Sometimes we could recreate the social and political profile of the members of the killing squads. The general impression is that we’re not talking about criminals, but literally about the Jews’ neighbors – the grocer, the barber, sometimes friends of the victims. They killed voluntarily.”

“But perhaps we can also answer some questions about the Jews. How were they tricked to go to the pits? What was explained to them when they were told to take their clothes off? Did they know by this stage what would happen, or were they told they’d be getting work clothes before being sent to the east? I hope the new research will answer all those questions.”