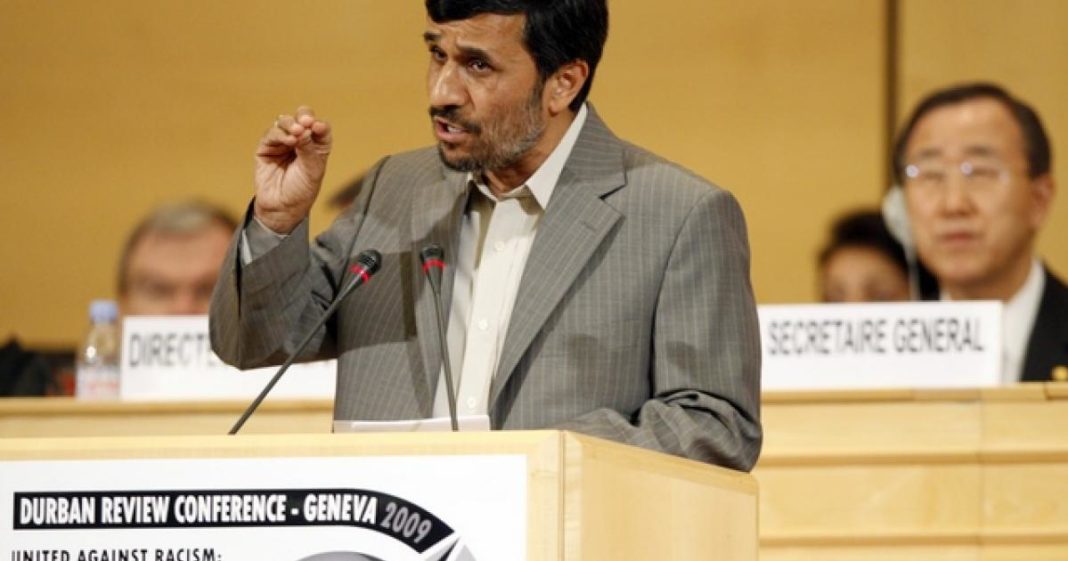 Iranian President Mahmoud Ahmadinejad prompted a rare walk-out at the United Nations when he called Israel a “cruel and repressive racist regime” in his remarks to a conference on race.

UN Secretary-General Ban Ki-moon deplored the address which prompted dozens of delegates to leave their seats, further undermining the summit which some Western powers including the United States are boycotting.

“It was a very troubling experience for me as secretary-general,” he told a news conference at the day’s end. “I have not seen, experienced, this kind of disruptive proceedings of the assembly, the conference, by any one member state. It was a totally unacceptable situation.”

Washington announced on Saturday it would sit out the Geneva forum on fears it would be dominated by unfair criticism against Israel. Australia, New Zealand, Italy, Germany, Poland and the Netherlands then followed suit.

Their boycott left Ahmadinejad, who has in the past cast doubt on the Nazi Holocaust, in the spotlight as the only head of state at the conference.

His speech produced exactly the kind of language that they feared, which had also caused Canada and Israel to announce months ago they would stay away.

“Following World War 2 they resorted to military aggressions to make an entire nation homeless under the pretext of Jewish suffering,” Ahmadinejad told the conference, on the day that Jewish communities commemorate the Holocaust.

“And they sent migrants from Europe, the United States and other parts of the world in order to establish a totally racist government in the occupied Palestine,” he said, according to the official translation.

“And in fact, in compensation for the dire consequences of racism in Europe, they helped bring to power the most cruel and repressive racist regime in Palestine.”

Washington decried Ahmadinejad’s speech as “vile and hateful”, while the Vatican called it “extremist and unacceptable”. Navi Pillay, the UN High Commissioner for Human Rights, called the address both “unsavoury” and “obnoxious.”

“I was shocked and deeply saddened by everything he said,” she told journalists. “I don’t think, though, that his behaviour provided any justification for any other member state to walk out from this conference.”

Dozens of diplomats in the audience promptly got up and left the hall for the duration of the speech. While most returned when Ahmadinejad finished speaking, the Czech Republic said its delegation would no longer take part in the conference.

“Such outrageous anti-Semitic remarks should have no place in a UN anti-racism forum,” said British ambassador Peter Gooderham, whose country chose not to send a minister to Geneva.

“Norway will not accept that the odd man out hijacks the collective efforts of the many,” he said.

However, a number of the delegations that remained behind applauded Ahmadinejad.

Ban, who had held a meeting with Ahmadinejad before the address, said it was “deeply regrettable” that the Iranian leader had ignored his plea to avoid causing upset.

“I deplore the use of this platform by the Iranian President to accuse, divide and even incite,” he said. “We must all turn away from such a message in both form and substance.”

Earlier on Monday, Israel recalled its ambassador to Switzerland in protest about the conference and Israeli officials also voiced anger at a meeting that Swiss President Hans-Rudolf Merz held on Sunday with Ahmadinejad.

Arab and Muslim attempts to single out the Jewish state for criticism had prompted the United States to walk out of the first UN summit on racism, in South Africa in 2001.

Although a declaration prepared for the follow-up conference does not refer explicitly to Israel or the Middle East, its first paragraph “reaffirms” a text adopted at the 2001 meeting which includes six paragraphs on those sensitive issues.

“The speech pronounced by Iran’s president is … an intolerable call for racist hatred that flouts the ideals and the values inscribed in the Universal Declaration of Human Rights. “The president … totally condemns this speech of hatred. He calls for an extremely firm reaction by the European Union.”

“I deplore the use of this platform by the Iranian President to accuse, divide and even incite. We must all turn away from such a message in both form and substance.”

“There’s no room for political posturing by some states because somebody who traditionally makes obnoxious statements once again does.”

US DEPUTY AMBASSADOR TO THE UNITED NATIONS ALEJANDRO WOLFF

“I can’t think of any other word than shameful.”

“It does a grave injustice to the Iranian nation and the Iranian people, and we call on the Iranian leadership to show much more measured, moderate, honest and constructive rhetoric when dealing with issues in the region.”

“President Ahmadinejad’s remarks … were offensive, inflammatory and utterly unacceptable. That such remarks were made using the platform of the UN’s anti-racism conference is all the more reprehensible.”

“… We cannot allow, through our presence, the legitimisation of absolutely unacceptable anti-Israeli attacks … The Czech delegation will not return to the conference at all, as a consequence to Ahmadinejad’s speech.”

“To the extent that the reaction demonstrated vocal opposition to what President Ahmadinejad stands for and has to say, I think that’s a very positive thing.

“Naturally, speeches like that of the Iranian president do not go in the right direction, because, even if he did not deny the Holocaust or Israel’s right to exist, his expressions were extremist and unacceptable.”

“If Hitler himself had addressed this forum, would UN Secretary-General Ban Ki-moon sit as politely as he did for the lies and hatred spewed forth by Ahmadinejad? Shame on him, and shame on anyone who stayed in the room to hear – or applaud – his evil rants.”

“Ahmadinejad had been denying the Holocaust and issuing mortal threats to the State of Israel from the beginning.”