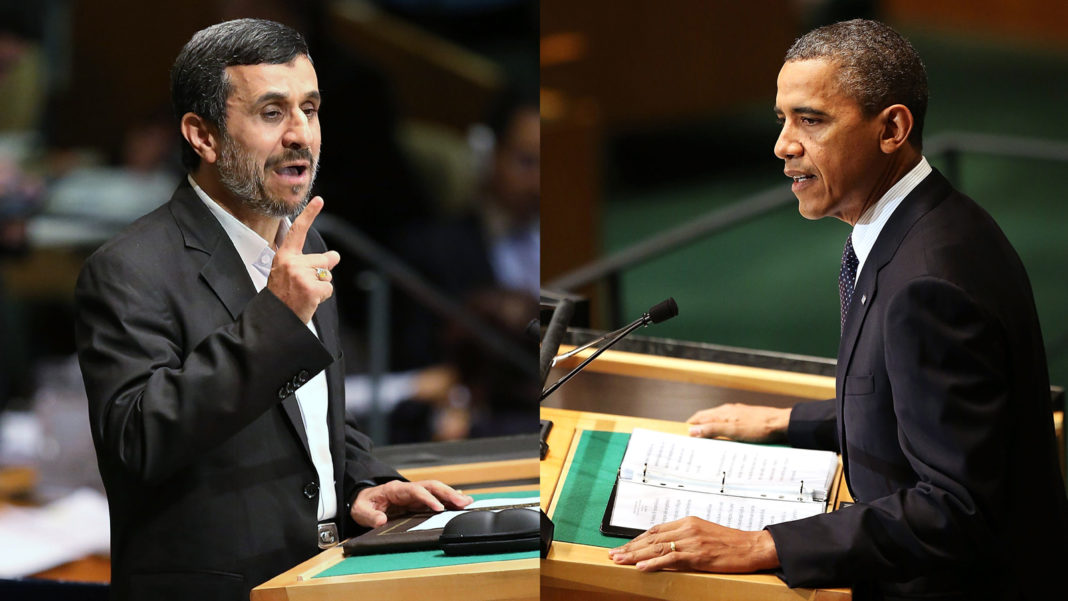 President Barack Obama on Tuesday condemned as “appalling and objectionable” a speech by Iran’s president which denounced Israel as a racist state and prompted a walkout from a U.N. conference on racism.

Delegates at the troubled United Nations meeting, meanwhile, speedily adopted an anti-racism declaration the day after the dramatic protest by Western states at the comments by Mahmoud Ahmadinejad.

Ahmadinejad was the only head of state to address the Geneva conference, known as Durban II, which is being boycotted by about a dozen countries including the United States who fear it could be used to single out Israel for criticism.

On Monday the Iranian president, who has in the past raised doubts about the Nazi Holocaust — commemorated by Jews that day — denounced Israel as a “totally racist government” founded “on the pretext of Jewish sufferings”.

Obama said in Washington: “I found many of the statements … appalling and objectionable.”

But he added after talks with Jordan’s King Abdullah at the White House he still wanted talks with Iran.

“We will continue to pursue the possibility of improved relations and a resolution to some of the critical issues in which there have been differences, particularly around the nuclear issues,” he said.

The Obama administration is keen to improve relations with Islamic and other countries, but the U.S. president said Ahmadinejad’s comments would hurt efforts to improve ties.

Washington cut relations with Iran after the Islamic revolution in 1979 and the taking hostage of Americans at the U.S. embassy in Tehran.

The United States and other Western countries are especially worried about Iran’s nuclear energy programme, which they fear is aimed at developing nuclear weapons.

Ahmadinejad’s comments caused European countries not already boycotting the conference to walk out but drew applause from Islamic delegations. The remarks caused dismay among U.N. officials hoping for agreement on a declaration against racism.

But on Tuesday delegates — including those who had walked out, except for the Czech Republic which stayed away — approved the anti-racism declaration.

The text “reaffirms” a contentious 2001 document that refers six times to Israel and the Middle East. It was adopted by consensus and without debate at a public session, well before the end of the week-long meeting.

The text covers issues such as xenophobia, immigration, migration, slavery, genocide, discrimination against Roma and Gypsies and against people suffering from AIDS.

“I hope that those who decided to stay away from this conference will join the international community again soon in the fight against these scourges,” Pillay said.

Swiss Foreign Minister Micheline Calmy-Rey told the conference that the adoption of the text was an important signal to the world community and victims of racism in particular.

“Some people thought they could use this gathering to say unacceptable things, contrary to the spirit and aims of this conference. The adoption of this text is the appropriate response,” she said.

European Jewish Congress President Moshe Kantor said it played into the hands of the “the racists, despots, and sponsors of terror who organised the Durban II conference”.

“Today’s decision to adopt the Durban II draft conference resolution — two days prior to the conference conclusion — was a cynical and desperate manoeuvre to recover from the embarrassment of providing the U.N. as a platform to incitement,” he said in a statement.

The United States and Israel walked out of the last major U.N. race summit in Durban, South Africa in 2001, after Arab states sought to define Zionism as racist.

That language was not approved in the declaration adopted then, but Obama said on Sunday the new text was an unpalatable starting point for fresh talks.

U.N. Secretary-General Ban Ki-moon said in Malta on Tuesday: “It is very regretful that the (Geneva) conference was misused by the Iranian president for political purposes.

“Before the speech I had a long bilateral meeting with President Ahmadinejad and urged him to give a balanced and constructive contribution to the conference because he was the only head of state present.”

Ban also expressed regret that some countries had stayed away from the conference.