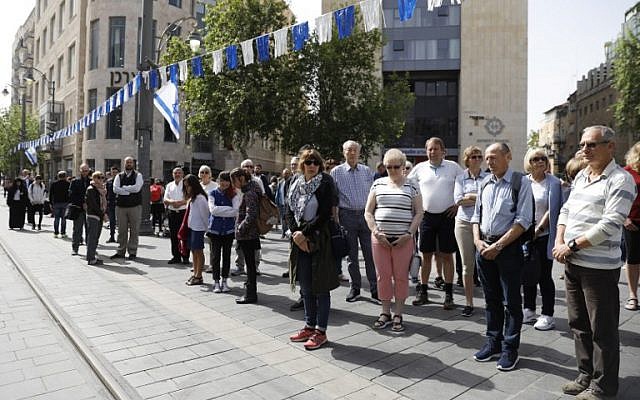 Frenetic Israel came to a standstill for two mournful minutes on Tuesday as air-raid sirens pierced the air in remembrance of the 6 million Jews who perished in the Nazi Holocaust.

Cars came to a halt and people froze in their tracks, many with heads bowed, in memory of the victims. An official wreath-laying ceremony at Yad Vashem, Israel’s Holocaust memorial, was to follow. In deference to the solemnity of the day, restaurants, bars and places of entertainment were closed.

Israeli leaders Monday vowed that there would not be a second Holocaust, their pledges ringing in the shadow of a U.N. conference against racism in Geneva perceived as anti-Semitic.

At the opening ceremony for the memorial day on Monday night, Prime Minister Benjamin Netanyahu criticized the president of Switzerland for meeting Iranian President Mahmoud Ahmadinejad ahead of the conference. The Iranian leader has suggested that the Holocaust never happened and has repeatedly called for Israel’s annihilation.

Speaking at the U.N.-sponsored racism conference on Monday, Ahmadinejad accused the West of using the Holocaust as a “pretext” for aggression against Palestinians.

“We will not allow the Holocaust deniers to carry out another Holocaust against the Jewish people. This is the supreme duty of the state of Israel. This is my supreme duty as prime minister of Israel,” Netanyahu said, speaking at Yad Vashem.

Israel boycotted the conference, along with the U.S. and eight other countries.

In research released to coincide with the memorial day, a study by the Stephen Roth Institute for the Study of Contemporary Anti-Semitism and Racism at Tel Aviv University found that the number of anti-Semitic incidents worldwide diminished by 11 percent in 2008 but spiked during Israel’s offensive in the Gaza Strip in January.

The Israeli researchers, working in cooperation with the European Jewish Congress, noted a theme in anti-Israel demonstrations: equating Israel with Nazi Germany, with signs incorporating the Israeli star with the Nazi swastika. The report said the intention was “to underline that if Nazism, the monster of the modern era, has no right to exist, then the Jewish state and its supporters, too, should be eliminated.”

Demographer Sergio DellaPergola of Hebrew University of Jerusalem calculated that if the Holocaust had not occurred, the world’s Jewish population might have been more than double what it is now — 32 million instead of 13 million.