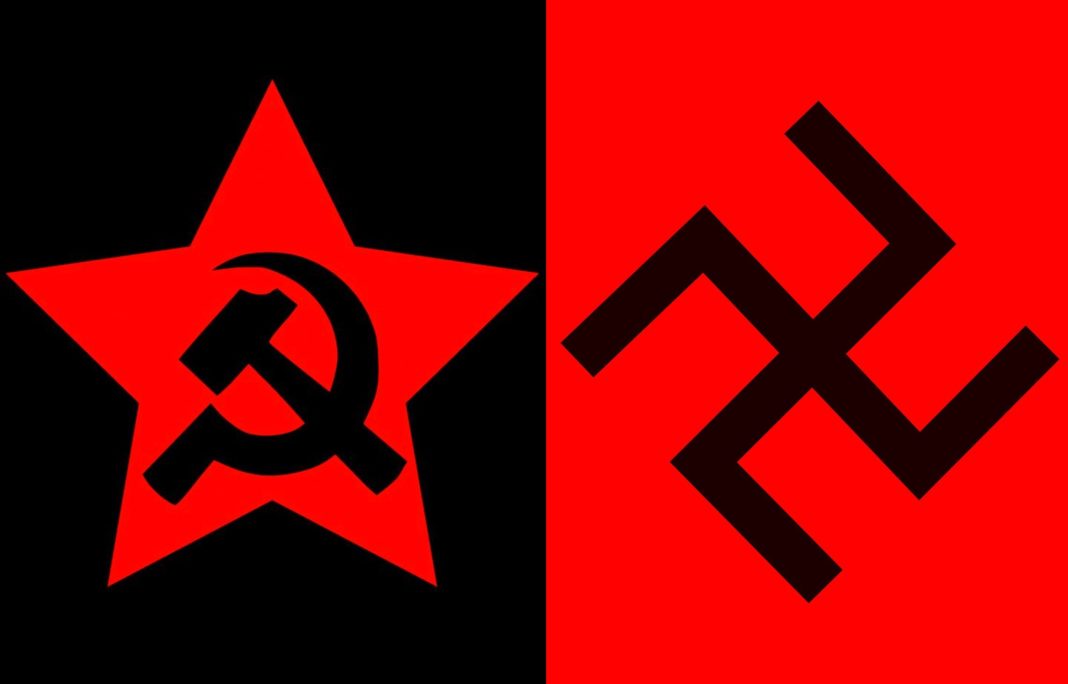 The head of the European Jewish Congress has called for an end to comparisons of Nazism and communism. Novosti News reports as follows.

“Any comparison between Nazi Germany and Stalin’s Soviet Union is unacceptable, the head of the European Jewish Congress said on Thursday.

“We are categorically against drawing parallels between Hitler’s regime and Stalinism,” Vyacheslav Moshe Kantor told a RIA Novosti news conference.

“We do not defend Stalinism, but we see a fundamental difference between those responsible for the Holocaust and those who ended it.”

The Organisation for Security and Cooperation in Europe passed a Lithuanian resolution this summer that blamed both Stalinism and Nazism for the outbreak of World War II.”

I have a simple answer to Mr. Kantor. Follow the body count. The death toll of communism under Stalin is estimated as between 20 and 60 million people. This total includes not only those executed but those who were worked or starved to death in the Ukraine and elsewhere.

The Nazis, although the total they killed through extermination was lower were in power for only twelve years.

I have read articles by those who express an animus to Jews who fault Jewish historians for placing a greater emphasis on Nazi crimes. Again, I would ask that such individuals look at the numbers. It is estimated that half of Europe’s Jews were killed by the Nazis. Such deaths were the liquidation of civilians which in some case were counterproductive from a military point of view. In some cases, military resources were diverted to kill Jews faster. The number of six million Jews killed was tabulated from records kept by the Nazis themselves. It now turns out that the book keeping in the Ukraine and Russia was a goood deal sloppier, and that tens of thousands of deaths escaped the meticulous record keeping of the Nazis. Father Patrick Desbois has made the collection of this history his life’s mission. The New York Times reports as follows.

“He is neither a historian nor an archaeologist, but a French Roman Catholic priest. And his most powerful tools are his matter-of-fact style — and his clerical collar.

The Nazis killed nearly 1.5 million Jews in Ukraine after their invasion of the Soviet Union in June 1941. But with few exceptions, most notably the 1941 slaughter of nearly 34,000 Jews in the Babi Yar ravine in Kiev, much of that history has gone untold.

Knocking on doors, unannounced, Father Desbois, 52, seeks to unlock the memories of Ukrainian villagers the way he might take confessions one by one in church.

“At first, sometimes, people don’t believe I’m a priest,” said Father Desbois in an interview this week. “I have to use simple words and listen to these horrors — without any judgment. I cannot react to the horrors that pour out. If I react, the stories will stop.”

Over four years, Father Desbois has videotaped more than 700 interviews with witnesses and bystanders and has identified more than 600 common graves of Jews, most of them previously unknown. He also has gathered material evidence of the execution of Jews from 1941 to 1944, the “Holocaust of bullets” as it is called.

Often his subjects ask Father Desbois to stay for a meal and to pray, as if to somehow bless their acts of remembrance. He does not judge those who were assigned to carry out tasks for the Nazis, and Holocaust scholars say that is one reason he is so effective.”

It is logical and understandable that a World War Two history with a Jewish focus would spend more time on Hitler.

In addition to the Nazis, however, one must also look at their Stalinist enablers. Because of the division of Europe that occurred with the German Soviet Friendship treaty in 1939, the Nazis were able to position themselves over a wider area to carry out the Final Solution. And during this time, there was economic cooperation between the Soviets and the Nazis.

To many other people such as the Tatars and the Ukrainians, it was Stalin who was their angel of death. Conversely, during the Stalinist campaign against organised religion, many rabbis were also killed. Stalin’s antipathy to Jews was well known. I have spoken to many Jews from the USSR who believe that the Doctor’s Plot of 1953 was an attempt to create a pretext to deport Soviet Jews to the Soviet Far East.

Mr. Kantor made a statement that begs for further clarification.

“We do not defend Stalinism, but we see a fundamental difference between those responsible for the Holocaust and those who ended it.”

It is very true that the USSR was instrumental in bringing an end to Nazism. But they did not do so in reponse to the murder of Jews. They were acting in defense of the USSR. Had Hitler kept his word and not attacked the USSR in 1941, the USSR would have done nothing in defense of Jews or any other victims of Nazi persecution. The people of the former Soviet Union deserve credit for a bravely fought battle. Stalin on the other hand liquidated many fine military leaders who might have contributed to the war effort. The brave fight of the people of the USSR was a fight for their own survival. It was not a moral stand against Nazism.

There was a wagon driver who worked for a chassidic rebbe who was known as a wise man in gis own right. When asked what the difference was between the left and the right he replied with a vivid analogy.

In looking at the totalitarian body count of the 20th century, this seems extremely relevant. I fully understand Mr. Kantor’s conviction about the unsuitability of comparing Nazism and Communism. From a Jewish historical perspective it is completely logical. But after examining the numbers and the experiences of other European nationalities, I must respectfully differ with him. When the window shades are pulled aside in hell, I expect to see Hitler and Stalin seated at the same table. There are, I believe, very few who would shed any tears over that.