Netanyahu At Auschwitz: World Must Unite To Confront New Threats 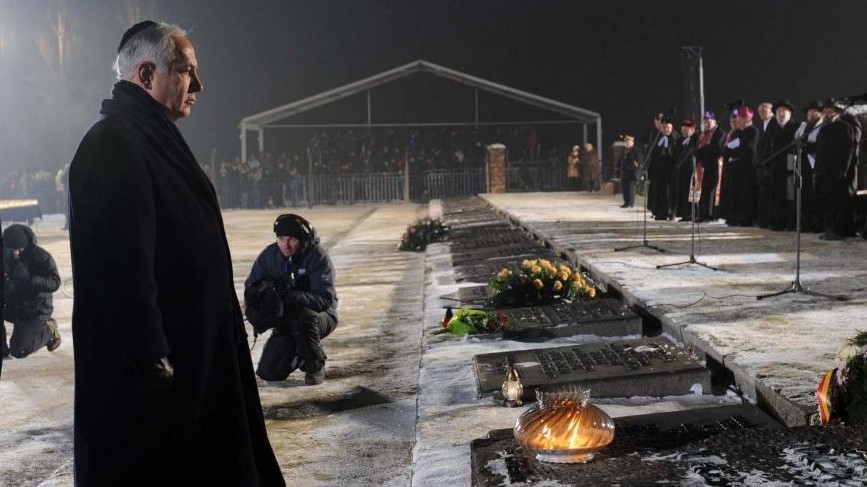 Holocaust teaches that murderers must be stopped before they act, says PM in apparent reference to Iran.

Prime Minister Benjamin Netanyahu told dignitaries gathered at the Auschwitz extermination camp on Wednesday that the world must learn from the Holocaust to unite against new threats.

In what was apparently a thinly veiled reference to Iran, Netanyahu called on the international community to come together to confront “impending dangers”.

Israel believes Iran to be building a nuclear bomb and views the Islamic Republic as an existential threat. Iran insists its nuclear program is purely for civilian purposes.

“We must warn of the impending danger to the rest of the world and at the same time to be ready to defend ourselves,” Netanyahu said. “The most important lesson from the Shoah is that murderous evil must be stopped as soon as possible, before it can realize its schemes.”

“We the Jewish people learned the lesson [of the Holocaust] well after we lost one-third of our people,” Netanyahu said, adding that a strong state of Israel with a powerful army was the only guarantee of preventing a second Holocaust.

“I pledge as prime minister that we will never let the hand of evil harm our people and our state, never again,” he said.

Netanyahu added: “All enlightened nations must absorb this lesson,” pledging that as the head of the state of he would not to allow a “new Amalek” to threaten again to destroy the Jewish nation – a reference to a biblical king who waged war against the Jews.

Earlier on Wednesday, Pope Benedict XVI recalled the 65th anniversary of the liberation of the Nazi death camp of Auschwitz, and event which revealed “the unprecedented cruelty,” of the Nazi Holocaust.

The 82-year-old pontiff made the remarks in his native German during his weekly general audience.

“On 27 January 1945, the gates of the Nazi concentration camp near the Polish city of Oswiecim, better known by its German name of Auschwitz, were opened and the few survivors freed,” Benedict said.

“That event, and the testimony of those who survived, revealed to the world the horror of the crimes of unprecedented cruelty committed in the extermination camps created by Nazi Germany,” added the pope, who as a teenager – like most others at the time – had been a member of the Hitler Youth in the waning days of the war.

International Holocaust Remembrance Day which is being marked in several

European nations, serves, according to Benedict, to recall “the planned annihilation of the Jews, and to honor those who, at the risk of their own lives, protected the persecuted and sought to oppose the murderous insanity.”

Benedict earlier this month made his first visit as pontiff to Rome’s Jewish main synagogue, an event dogged by a row over his recent elevation towards sainthood of World War II-era pontiff, Pius XII.

Critics say Pius failed to speak out against the Nazi persecution and murder of Jews, but Benedict and other supporter say he acted behind the scenes to ensure that Catholic-run institutions including convents and monasteries sheltered those fleeing from the crimes.

On Wednesday, Benedict said the Holocaust should serve as a universal lesson and “arouse ever greater respect for the dignity of each person, so that all mankind may feel itself to be one large family.”

“May omnipotent God illuminate hearts and minds, that such tragedies never happen again,” he said.

Meanwhile on Wednesday, Auschwitz survivors, bundled against the cold and snow, gathered at the site of the former death camp to mark the 65th anniversary of its liberation.

Survivors, some with grown children – along with others there to honor the millions killed by the Nazis – moved among the barracks and watchtowers of Auschwitz and Birkenau, neighboring camps that stand as powerful symbols of the Holocaust.

Six million Jews were killed by the Nazis and their collaborators during World War II, including 1 million at the Auschwitz and Birkenau camps.

Some the leaders of world Jewry convened on Wednesday in Krakow to commemorate International holocaust Remembrance Day. Almost all the speakers at the meeting referred directly or indirectly to the Iranian threat.

Moshe Kantor, president of the European Jewish Congress referred to Iran in telling reporters at the Krakow opera house that “endless tolerance to intolerance” was a grave threat, and that this is a “present-day” lesson.

The European Jewish Congress’ event at the opera house was one of the major events, and was held ahead of the central ceremony at Auschwitz-Birkenau, which Netanyahu also attended along with European Parliament president Jerzy Buzek and other dignitaries.

In his speech at the opera house, Buzek referred also to the suffering of East European countries under Communism. Buzek last year expressed support for naming August 23 a combined commemoration day for victims of Nazism and Stalinism. But leading Holocaust scholars called this attitude “the most serious threat facing the preservation of the memory of the Holocaust” and a “trivialization” of the Holocaust.

Yad Vashem Chairman spoke after Buzek, and said he was “concerned” about attempt to equate the Holocaust with other catastrophes.

Ron Lauder, president of the World Jewish Congress, was the only speaker who referred directly to Iran and its president, Mahmoud Ahmedinejad, as a Holocaust denier. Lauder urged the European Union and European Parliament “to continue” to be “a powerful institution” working against” Iran’s drive to acquire nuclear weapons.

One of the most evocative speakers at Krakow was former chief rabbi of Israel Israel Meir Lau, himself a Polish-born Holocaust survivor. He recalling how his mother pushed him away from her when he was 7.5 years old during a selection process in 1942 en route to a concentration camp.

“My mother sensed I would have a better chance of surviving with the men than wioth the women and children,” he said. “When dealing with matters of life of death, one needs to make very difficult choices.” Lau, who never saw his mother after that, said that world leaders needed to learn from his mother.

“Make a decision,” he told the crowd of media people and EU legislators. “Be brave and determined to save lives. Don’t hesitate. A coalition of allies can save the world from a madman and a mad phenomenon.”

“We must stop the spread of anti-Semitism in this way because extremist movements are ever more boldly raising their heads in Hungary,” Lieberman said, as quoted by the state news agency MTI.

Earlier in the day, the prime ministerial candidate of the governing Hungarian Socialist Party, Attila Mesterhazy, tabled a motion to ban “hate speech” in the Hungarian parliament.

Liebermann also held talks with Hungary’s foreign minister Peter Balazs while in Budapest, the ministry said in a statement.

The two discussed regional stability in the Middle East and Islamic fundamentalism, terrorism and the dangers inherent in Iranian politics, the ministry said.

The Hungarian capital Budapest is home to Central and Eastern Europe’s largest Jewish population, with some estimates as high as 100,000, as well as the continent’s largest synagogue.

Up to 600,000 Hungarian Jews are believed to have perished during the Holocaust, mostly in the closing days of the Second World War.