The Last Survivors Return To Auschwitz 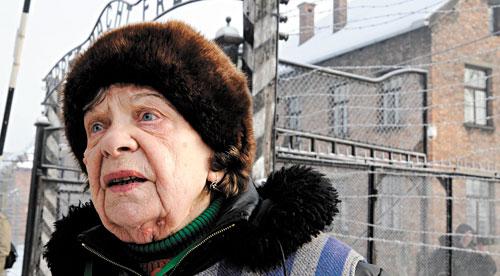 On a midwinter morning at the Auschwitz-Birkenau memorial site, jagged icicles cling to the buildings.

Yet this week, visitors made their way under the famous gate – with a replica sign “Arbeit Macht Frei”, following the theft of the original last month – seemingly oblivious to the cold. They came to learn, to absorb and to bring a message home.

Wednesday marked the 65th anniversary of the liberation of this notorious death camp. About 1.5 million people were murdered here; 90 per cent of the victims were Jews.

Several events were held marking this day here: an international conference for ministers of education, at Auschwitz; the third annual “Let My People Live” forum sponsored by the European Jewish Congress, the World Holocaust Forum and Yad Vashem, in Krakow; and the ceremonies at the site of Auschwitz-Birkenau itself, featuring addresses by Israeli President Benjamin Netanyahu, Polish President Lech Kaczynski, European Parliament President Jerzy Buzek and others.

At the same time, Israeli President Shimon Peres addressed the Bundestag in Berlin, speaking Hebrew – not far from Wannsee, where the Nazis mapped out their industrialised mass murder of Europe’s Jews in 1942.

Though most thoughts were focused on remembrance, there were also warnings today about current dangers – particularly related to a nuclear Iran.

“Like our neighbours, we identify with the millions of Iranians who revolt against dictatorship and violence,” said Mr Peres. “Like them, we reject a fanatic regime. A regime which threatens destruction, accompanied by nuclear plants and missiles and which activates terror in its country and in other countries. This regime is a danger to the entire world.”

Since the last major ceremonies at Auschwitz five years ago, many survivors have died. Still, some were at the former camp this week, remembering.

Liberation came on a winter much like today, recalled one survivor.

“It was snowing heavily,” said Eva Kor, who survived Josef Mengele’s experiments. “Then I saw the Russian soldiers. And they were smiling. They gave us hugs and chocolate and cookies. And it tasted wonderful.”

On Wednesday, at a forum in Krakow, the veterans shared their remembrances of 65 years ago.

“The scene was really ugly,” recalled Yakov Vinnichenko, 85. “The Nazis left people there who could not walk, some could not talk. They were really weak – some were on the brink of death.”

“The first thing I saw were huge buildings and electrified fences,” said fellow veteran Ivan Martynushkin, who like Mr Vinnichenko is not Jewish. “I am here because of the suffering in my heart. It is our duty to tell.”

Observers said the urgency of Holocaust education was underscored this week after Polish Catholic Bishop Tadeusz Pieronek suggested Jews were “using the tragedy for propaganda”.

Anyone who “says something like this, in the centre of a murdered civilisation, he is a bloody antisemite, and that’s it,” said European Jewish Congress President Moshe Kantor.