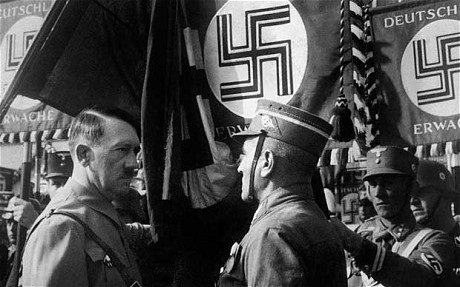 In the biting cold of the Polish winter, warnings of the renewed rise of anti-Semitism and the threat posed to world peace by a nuclear-armed Iran marked Holocaust Memorial Day, the 65th anniversary of the liberation of Auschwitz.

In the death camp where 1.1 million Jews were murdered, politicians and religious leaders from Poland and Israel gathered to urge that the lessons of the Holocaust be learnt and passed on to future generations.

Speakers said that last month’s theft of the wrought-iron sign from the camp’s entrance served as a reminder that memories of the Holocaust and its victims remained under threat. The original, hacked into three pieces by the thieves, is still being repaired.

“From this place, I swear as the leader of the Jewish people, never again shall we allow evil to hurt our people,” Binyamin Netanyahu, the Israeli Prime Minister, said. The warnings about Iran were led by Shimon Peres, the Israeli President. Addressing the German parliament in Hebrew in Berlin, he described the Iranian Government as a “fanatic regime” and sponsor of international terrorism.

To applause from the 622 German deputies, he said that Tehran’s nuclear programme “threatens destruction” and represented “a danger to the entire world”.

“This day not only represents a memorial day for victims, not only the pangs of conscience of humankind in the face of the incomprehensible atrocity that took place, but also of the tragedy that derived from the procrastination in taking action,” he said.

At a memorial event in Cracow, the Polish city near Auschwitz, Meir Lau, the Chief Rabbi of Tel Aviv, said that President Ahmadinejad of Iran was “threatening the very existence of a neighbour”.

“I see the headlines every day,” Rabbi Lau told The Times. “Within two years he will have an atomic weapon, so it means there is a threat.”

Ronald Lauder, the President of the World Jewish Congress who was saved from the gas chamber aged seven, when his mother shoved him into a different queue, said: “I believe another horror is coming to our world. I am talking about what is happening in Iran. We have a man who denies the Holocaust. We have a man who talks about the destruction of Israel.

Moshe Kantor, president of the European Jewish Congress, said that the need for a more permanent memorial project was pressing because the survivors were now dying out.

“My urgent idea is to establish a University of Global Security and Tolerance, somewhere in the centre of European civilisation. Those twins, tolerance and security, cannot live without each other. This university will be the strongest answer to all those who dare to forget the meaning of the Holocaust.”

Neo-Nazis marked the anniversary in their own manner: desecrating Jewish graves. In Strasbourg, eastern France, more than a dozen tombstones in a Jewish cemetery were daubed with swastikas and the slogan “Juden raus” – “Jews out”.