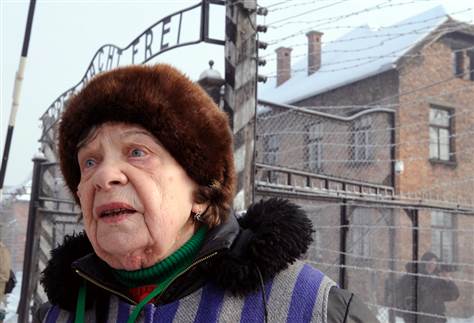 “From this place, I swear as the leader of the Jewish people, never again shall we allow evil to hurt our people,” Netanyahu said in a keynote address at the commemoration.

“The Holocaust was not the work of savage animals but of savage people,” he said, referring to Nazi Germany’s World War II genocidal “Final Solution” which claimed the lives of six million of pre-war Europe’s 11 million Jews.

In an ecumenical service that followed Tel Aviv’s Chief Rabbi Israel Meir Lau – a Polish-born Holocaust orphan – and his Polish opposite number Michael Schudrich intoned the Kaddish, or Jewish prayer of mourning, their breath spiralling white into the freezing air.

Participants then lit candles at the foot of a monument to the camp’s victims as a Polish army bugler played a memorial air.

For the majority of the 100 aging Auschwitz survivors who braved bone-chilling weather to attended, it was likely the last opportunity to visit the site.

Among them was Wladyslaw Bartoszewski, 87, a former Polish foreign minister.

“The last survivors, present here, have the right to believe that their suffering and the death of their loved ones built a better future for the people of Europe and the world, regardless of their religion,” Bartoszewski said.

“If at the time there was more empathy for Jews in the United States, from Great Britain, in occupied Europe, in Poland, if there had been more empathy among those who could have decided to bomb the crematoria and the gas chambers, perhaps we wouldn’t have avoided the Holocaust, but it would have perhaps been less far reaching,” Auschwitz survivor, Polish Jew and historian Marian Turski said.

From 1940-45 some 1.1 million people perished at Auschwitz-Birkenau – one million of them Jews from across occupied Europe – mostly killed in gas chambers but also from shooting, hanging, starvation, disease, slave labour and pseudo-medical experiments.

The camp, set up by the occupying Germans near the southern Polish city of Oswiecim, was liberated by Soviet troops on January 27, 1945. In 2005 the United Nations declared the date International Holocaust Remembrance Day.

Marking the emotional anniversary, US President Barack Obama spoke of the “sacred duty to remember the cruelty” of Auschwitz and of “resisting anti-Semitism and ignorance in all its forms” in a video address aired at an event organised by the European Jewish Congress in Krakow, southern Poland, ahead of the official ceremonies at the camp 68 kilometres away.

“And in some countries they go even farther – they glorify Nazi accomplices. Such attempts to revisit history are unacceptable and we should join forces in the fight against them,” he warned.

The camp has been run as a museum and memorial since 1947, almost entirely funded by the Polish state.

Poland’s Prime Minister Donald Tusk urged more international financial support for the Auschwitz-Birkenau Foundation set up last year to preserve the actual site, which unlike other death camps was not entirely destroyed by the retreating Nazis.

“We know the importance of preserving this place of memory intact as a cemetery, a monument, a summons to memory and evidence of the crime,” Tusk said.

Earlier Wednesday, at the Vatican, German-born Pope Benedict XVI decried the “unimaginable cruelty” of the Holocaust.

That event and “the testimony of the survivors revealed to the world the horror of the crimes of an unimaginable cruelty in the extermination camps created by Nazi Germany,” the pontiff said.

There were only around 7000 survivors in the camp at the liberation. The Nazis had evacuated some 60,000 others only days earlier in the notorious “Death March” as they fled the Soviet advance.