First Center For Study Of European Jewry Inaugurated In Israel 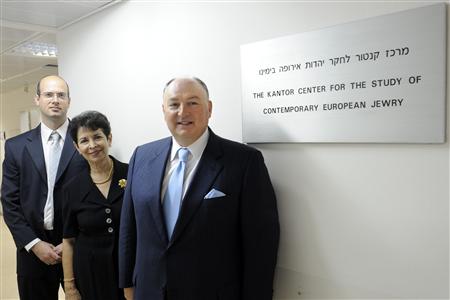 The first center for the study of contemporary European Jewry in Israel was inaugurated Monday at Tel Aviv University.

The center, named after European Jewish Congress President Moshe Kantor, will amongst others study existing legislation on anti-Semitism in Europe and draft an ‘ideal law’ for combating the growing phenomenon.

The inauguration ceremony was attended by Yossi Peled, Minister at Israel’s Prime Minister’s Office, Spanish ambassador to Israel Alvao Iranzo, whose country currently chairs the EU, and the other European ambassadors to Israel.

According to Kantor, there is a pressing need for such a center in Israel.

“Although Europe is currently third in actual numbers behind Israel and the US in terms of Jewish demography, it remains an integral and vital center for the Jewish past, present and future,” he said.

“Everything concerning the Jewish people and Israel still has strong connections to our continent”.

“We hope to preserve the memory of Jewish Europe’s past, while studying present trends and preparing for the future by creating legislation against anti-Semitism and revitalizing centers of European Jewry,” Kantor added.

The center will form a framework for interdisciplinary research of the aspects and characteristics of Jewish communities in Europe after the Holocaust.

Prof. Yossi Klafter, President of Tel Aviv University, said the establishment of the ‘Kantor Research Center on European Jewry’ “is a constructive step towards reinforcing Jewish pride and identity.” “It will support and coordinate between research projects on campus relating to European Jewry.”