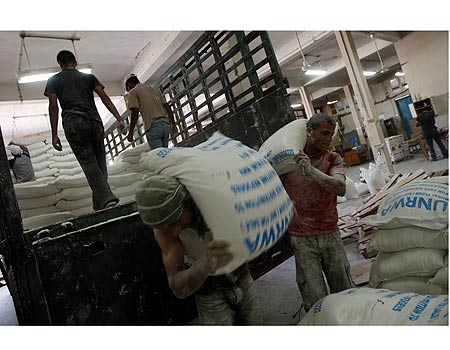 Germany has banned an organization it accuses of financing the Islamic militant group Hamas, the interior ministry said Monday.

The Frankfurt-based International Humanitarian Relief Organization (IHH) is believed to have collected money in mosques and to have sent about euro6.6 million ($8.3 million) to relief organizations belonging to or supporting Hamas, which Germany considers a terrorist organization, the ministry said.

“Under the cover of humanitarian aid, the IHH has been supporting for a long time and with considerable financial resources so-called social groups which have to be seen as connected to Hamas,” Interior Minister Thomas de Maiziere said.

“It exploits trusting donors’ willingness to help by using money that was given for a good purpose for supporting what is, in the final analysis, a terrorist organization,” de Maiziere said.

Hamas, which runs Gaza, doesn’t recognize Israel. Organizations that work directly or indirectly against Israel’s right to exist lose the right to be active in Germany, de Maiziere said.

The International Humanitarian Relief Organization could not be reached for comment, and its web pages were shut down in the course of the day.

The organization was founded in 1992 in Freiburg, Germany, the ministry said. In 1997 the group split in two, IHH Germany and IHH Turkey, which are now two separate entities, it said.

IHH Turkey was recently involved in organizing a pro-Palestinian flotilla meant to break the Israeli blockade of Gaza. The flotilla was stopped by Israeli military May 31. Eight Turks and one Turkish American were killed in the raid.

German authorities have been investigating the International Humanitarian Relief Organization in Frankfurt for a year, the ministry said. On Monday, authorities raided 29 places throughout the country and confiscated files, data, and real estate belonging to the organization.

The main figures in IHH Germany are also active in the Islamic group Milli Gorus, which has been under observation by German authorities, the ministry said.

The money the International Humanitarian Relief Organization sent to six groups connected to Hamas was collected in Milli Gorus mosques with donors not necessarily knowing where their contributions went, it said.

According to a 2004 German high court decision it is irrelevant whether the money was used for charity or otherwise because Hamas works as an entity and giving money to any branch will bolster the group’s terrorist activities, the ministry said.

While IHH has been active in Germany for a long time, authorities started investigating it only after being tipped off by a bank that it suspected money laundering.

Though the organization is now illegal in Germany, its staff face no immediate criminal charges unless they continue the group’s activities or regroup, the ministry said.

The European Jewish Congress applauded Germany’s ban on the IHH and called on the EU and other European governments to follow suit.