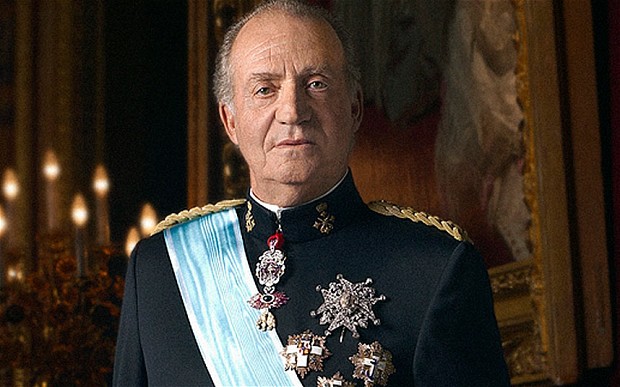 European Jewish Congress president says King Juan Carlos symbolizes strong leadership during era of crisis in Europe which forces of intolerance are utilizing for their benefit.

The European Council on Tolerance and Reconciliation (ECTR) presented His Majesty King Juan Carlos I with the first ever ‘European Medal of Tolerance’ at Palacio de la Zarzuela on the outskirts of Madrid Monday, in recognition of His Majesty’s lifelong dedication and devotion to tolerance and political reconciliation.

The ECTR, a non-governmental organization, is comprised of former heads of European states, Nobel Peace Prize laureates and other individual’s world renowned for their achievements in promoting tolerance.

The medal was conferred on the King by co- chairs of the ECTR, former President of Poland, Aleksander Kwaśniewski and Moshe Kantor, president of the European Jewish Congress.

“Moral leadership symbolized by the recipient of our European Medal of Tolerance is especially significant at a time when tolerance appears to be waning in Europe in favor of racism and xenophobia,” President Kwasniewski said about the award. “King Juan Carlos personally led the transformation from dictatorship to democracy in Spain while uniting the people through a very difficult period.”

“In Europe, there are major changes, whether it is the ongoing economic crisis or changes within the European Union, which the forces of intolerance are utilizing for their benefit, and we need leadership to steer us through these challenging times.” Kantor added.

The ECTR has a vision whereby the average citizen of Europe would not be a bystander to intolerance, but rather work against acts of racism, xenophobia and anti-Semitism.

“We need a strong and powerful leadership in Europe today to stand against the growing tide of extremism and hate,” Kantor continued. “Leaders are people who actively promote tolerance. The King’s strong messages for democracy and the unity of all people, during an extremely complex era, are a shining example for twenty-first century Europe that needs to be recognized.”

Among the many initiatives promoted by the ECTR are to recommend a European Framework Convention on Tolerance. This will serve as a pan-European initiative to introduce anti-racist laws and practices to every nation accordingly. The ECTR will hold a large conference in Dubrovnik, Croatia, on 24-25th of October 2010, to discuss experiences in reconciliation and promotion of tolerance within Europe. The conference titled “Towards Reconciliation. Experiences, Techniques and Opportunities for Europe” will be attended and addressed by leaders from current and former conflicts and disputes in Europe and experts on human rights issues and reconciliation.