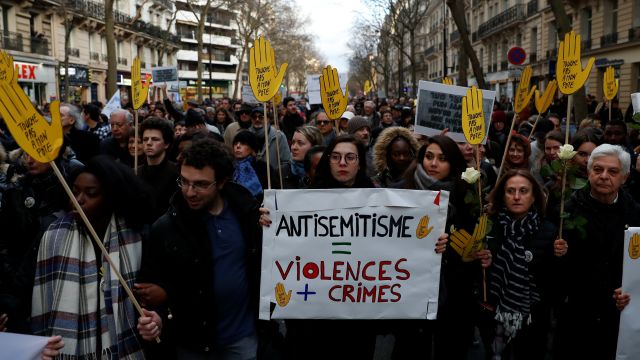 European leaders must intervene to save small Jewish communities from an anti-Semitic onslaught, the head of the European Jewish Congress said.

In a statement issued Thursday, Moshe Kantor said European Jewish communities are in “grave danger” from the anti-Semitism, some of it officially sanctioned, as made clear by recent sensational anti-Semitic incidents in Belgium and Sweden.

Kantor, who is hosting a conference in Dubrovnik, Croatia, later this month on best practices for combating racism and xenophobia, said European Union and European leaders should “launch a campaign against intolerance and anti-Semitism to remind European citizens that the new Europe was established after the Second World War on the concept of ‘Never Again.’ ”

Among the recent incidents he cited were a “Palestine Day” at a Catholic school in Antwerp, Belgium, during which children were invited to throw replicas of Jewish and Israeli soldiers into two large tanks. The game was called “Throw the soldiers into the sea.”

In another incident, a gang shouting “Heil Hitler” and “Jewish pigs” attacked a Jewish children’s event in Malmo, Sweden, last weekend. Many Jews reportedly have been leaving Malmo this year due to an increase in anti-Semitic incidents.

Citing a feeble official response, Kantor said that “anti-Semitism is at best actively promoted and at worst ignored by some officials in Europe. Due to this intolerable situation, small Jewish communities, like Malmo, are teetering on the brink of extinction,” threatened by extremists on the left and right.

“If they can’t receive protection or respite from mainstream officials,” he said, “then we are entering a very dark period for the Jews in Europe.”