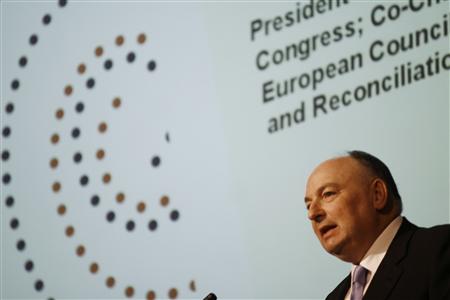 European Jewish leaders on Sunday helped forge a resolution in favor of setting up a “Balkan truth and reconciliation commission.”

The resolution, which could help address lingering hostility and resentment in the Balkans, was announced at a conference in Dubrovnik on reconciliation in Europe.

It was initiated by the European Jewish Congress (EJC) in an attempt to make new allies and promote a more “proportionate and contextualized” view of the Israeli-Palestinian conflict, according to one senior congress official.

The announcement by Izetbegovic, a moderate Muslim who was elected earlier this month, was met with criticism from some of the 150 European policy-makers who convened in the Croatian capital Dubrovnik for the conference.

One speaker said that the proposed model, implemented in post-apartheid South Africa, “sounds nice but glazes over the fact that genociders would get away with it.”

According to the International Criminal Tribunal for the former Yugoslavia- a contested and external judicial body set up by the UN – over 100,000 people died in the war that erupted in the region in the 1990s, some through massacres, ethnic cleansing and use of concentration camps.

The new truth and reconciliation commission is part of a vision which Moshe Kantor, president of the European Jewish Congress, outlined for the forum of present and former European leaders.

“Beyond declarations, we must come up with new tools and techniques to combat extremism and bring about reconciliation,” he said.

The implementation of the truth and reconciliation model to Yugoslavia has been promoted since 2006 by Documenta, a Zagreb-based NGO, as well as other organizations.

Kantor also added that some of the people who attended the conference could be counted on to support his plan to set up an educational institution for tolerance. “This university of global security and tolerance should have a program which sets clear criteria for tolerance, and its limits,” he said.

He added that the conference is part of a decision within the European Jewish Congress to seek new allies by dealing also with non-Jewish issues.

“When a celebrated human rights activist like Elie Wiesel writes a letter on Israel to President Barack Obama, it’s more powerful than a letter by a pro-Israel guy,” he argued.

Among the participants of the two-day conference – co-organized by the NGO European Council on Tolerance and Reconciliation (ECTR) – were Croatian President Ivo Josipović and Croatian Prime Minister Jadranka Kosor, as well as former Norwegian premier Kjell Bondevik, ex-Italian Prime Minister and Rita Süssmuth, former president of the German Bundestag.