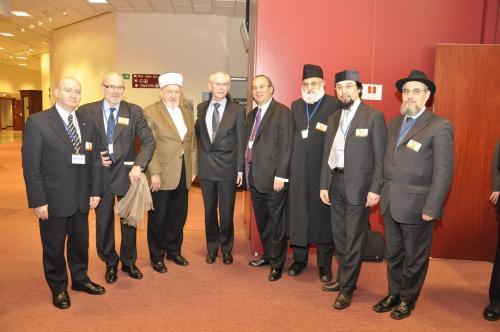 Leaders of Europe’s Jewish and Muslim communities have met in Brussels in an effort to encourage greater religious co-operation.

Some 50 people from countries including Britain, Germany and the Netherlands, as well as the president of the European Council, Herman Van Rompuy, attended Monday’s meeting.

After the meeting the groups said in a statement that they would work “to ensure that Jews and Muslims are able to practise our respective faiths fully and unimpeded by intrusive, discriminatory and unfair governmental regulations.”

They also called for “co-operative projects to succor the poor and homeless of all backgrounds [and] to help protect new immigrants who are threatened by hatred and xenophobia.”

Moshe Kantor, president of the EJC, also said that it was vital for European countries to invest more in education and to bolster legislation against hate, racism and xenophobia at all levels.

He said: “The current legislation is not enough. The law must become a tool for a more enlightened and unified Europe where those that ferment hate should receive proper sanction.”

Rabbi Marc Schneier, vice-president of the WJC, added: “Our two communities must focus more on what unites us than what separates us.

“We also must restrain the radicals within our own ranks.”

At the beginning of the day Imam Abduljalil Sajid, who chairs Britain’s Muslim Council for Religious and Racial Harmony, said a prayer for victims of the devastating forest fire in Israel, in which 42 people died.