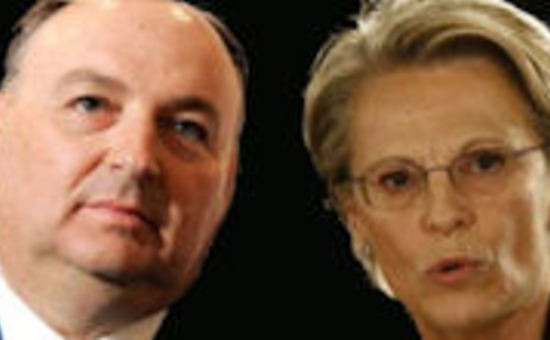 Alliot-Marie spoke at a gala dinner at the end of the EJC’s annual conference where one hundred European Jewish communal leaders, representing 27 Jewish communities in Europe, were gathered.

During her speech Alliot-Marie told EJC President Dr. Moshe Kantor, EJC members and Jewish leaders from across Europe, how pleased she was to be speaking at such an important event, her first speech to an international organization since assuming office. She expressed her belief that European Jewry has enriched the culture of Europe and has helped build its current identity.

The Minister of Foreign and European Affairs also spoke about the close relationship between the French Republic and the Jews of France and how she hoped it would continue to grow even stronger.

Alliot-Marie addressed the global concern of a nuclear Iran and promised that France would stand firm against Ahmadinejad, the radical regime of Iran and their nuclear weapons program.

She ended by thanking Kantor and the EJC executive for having invited her to take part in such a beautiful and momentous occasion.

EJC President Kantor thanked Minister Alliot-Marie for attending and also addressed the subject of Iran. “We are getting very close to the tipping point where Iran will reach the point of no return regarding nuclear weapons capability,” Kantor said. “France, the EU and the international community have to make every effort to prevent Iran from reaching this point and we will need to see unified, concerted and intensive efforts to achieve this aim vital for international security.”

Kantor also spoke about contributing to a more tolerant Europe, stating, “The need to strengthen tolerance in Europe is vital, not only for Jews but for the future of the continent.”

Kantor hosted the evening, whichwas also attended by President of the CRIF Richard Prasquier, the Consistoire President Joël Mergui, Ambassadors from Israel, Poland, and the Czech Republic, representatives from the Russian, American and Austrian embassies, the EJC executive, leaders of EJC affiliated communities and a number of French Jewish personalities, Rabbis, Imams and representatives of Muslim organisations.

The new Israeli Ambassador to France Yossi Gal also addressed the dinner, and offered his insights into the Middle East peace process as well as his hopes for the future of Israel.