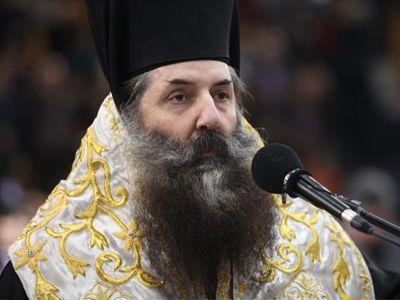 Leaders of Greece’s small Jewish community objected on Wednesday to televised remarks by a Greek Orthodox bishop who blamed the country’s financial problems on a conspiracy of Jewish bankers and claimed that the Holocaust was orchestrated by Zionists.

The Central Board of Jewish Communities in Greece complained to church authorities about the anti-Semitic remarks made by the Metropolitan Seraphim of Piraeus during a recent interview on Greek television, according to a statement (in Greek) on the group’s Web site.

The Jewish Telegraphic Agency reported that the bishop “said that there is a conspiracy to enslave Greece and Christian Orthodoxy. He also accused international Zionism of trying to destroy the family unit by promoting one-parent families and same-sex marriages.”

According to the news agency, when the bishop was then asked, “Why do you disagree with Hitler’s policies? If they are doing all this, wasn’t he right in burning them?” he replied: “Adolf Hitler was an instrument of world Zionism and was financed from the renowned Rothschild family with the sole purpose of convincing the Jews to leave the shores of Europe and go to Israel to establish the new Empire.” He added that Jewish bankers like “Rockefeller, Rothschild and Soros control the international banking system that controls globalization.”

Greece’s Jewish community is ancient, but only about 10,000 Greek Jews survived the Holocaust.

The president of the European Jewish Congress, Moshe Kantor, called for the bishop to be fired in a statement sent to reporters on Wednesday. He added: “It is completely unacceptable that someone senior in a mainstream European religious denomination can make such repulsive and hate-filled claims.”

Earlier this year, the bishop wrote to Britain’s Queen Elizabeth II to demand that Elton John be stripped of his knighthood for telling Parade magazine, “Jesus was a compassionate, super-intelligent gay man.” The bishop also complained to Britain’s ambassador to Greece about the singer’s “unacceptable and absurd” comment, which, he said, had caused “deep pain and bitterness.”