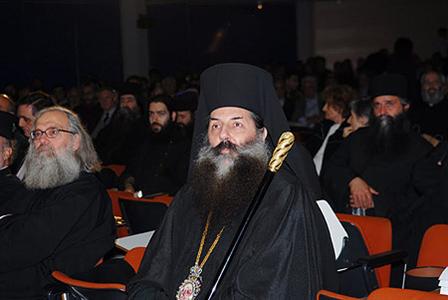 Two Jewish groups have urged the Greek Orthodox Church to publicly denounce blatantly anti-Semitic comments made by one of its bishops.

In an interview with a popular show on Mega TV in Greece, Metropolitan Seraphim of Piraeus blamed Jews for orchestrating the Holocaust and accused “world Zionism” of a conspiracy to enslave Greece and the Orthodox Church. The bishop also charged Jewish bankers with controlling international finance.

He reportedly said, “Adolf Hitler was an instrument of world Zionism and was financed from the renowned Rothschild family with the sole purpose of convincing the Jews to leave the shores of Europe and go to Israel to establish the new Empire.”

“It is especially troubling to hear such words from a religious leader. The Orthodox Church must make clear that anti-Semitism in all its forms is unacceptable,” he added.

The League expressed its concern in letters to the Ecumenical Patriarch Bartholomew and to Archbishop of Athens and All Greece Hieronymos II.

The European Jewish Congress (EJC) called for the bishop’s removal.

“It is completely unacceptable that someone senior in a mainstream European religious denomination can make such repulsive and hate-filled claims,” EJC President Moshe Kantor said.

“That they were said so openly on national television demonstrates that there are those who feel no shame expressing these views in front of a wide audience.”

“European nations and the European Union must immediately pass robust legislation to ban and sanction anti-Semitism in all its forms and at all levels. This rant proves that the discredited views of the twentieth century are apparently alive and well within areas of Europe and this needs to be addressed immediately,” said Kantor.