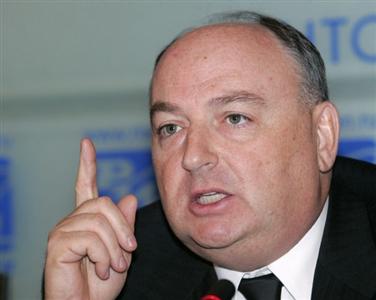 European Jewish Congress (EJC) President Moshe Kantor will warn European leaders that “extremist forces” are once again emerging from Europe and stress the need for added vigilance, during a Holocaust commemoration at the European Parliament in Brussels next week.

On the occasion of International Holocaust Remembrance Day, Kantor is to address on Tuesday a ceremony commemorating the anniversary of the liberation of the Auschwitz-Birkenau concentration camp.

The event will be held under the patronage of the President of the European Parliament, Jerzy Buzek. Other speakers at the ceremony will include Israel’s Minister of Public Diplomacy and Diaspora Affairs Yuli Edelstein, Nobel Laureate Elie Wiesel, World Jewish President President Ronald Lauder, and Yad Vashem chairman Rabbi Israel Meir Lau.

Six remembrance candles will be lit by Holocaust survivors and ‘Righteous among the nations,’ people who saved Jews during WWII.

Earlier in the day, an EJC delegation, led by Kantor, will meet with Hungarian Prime Minister Viktor Orban, whose country currently chairs the European Union, to discuss various issues of concern.

“We know how devoted Hungary and Prime Minister Orban are to democracy and we will call on him to quell any anti-Semitism in his nation and to press for a reinforcement of existing legislation to fight anti-Semitism, racism and xenophobia at the European level,” Kantor said.

“We will also stress the importance of the European role in the sanctions regime against Iran and that a zero tolerance for those who ignore the sanctions should be ensured.”

Tuesday’s event at the European Parliament, which is co-organised by the EJC, the European Jewish Community Centre (EJCC) and the European Coalition for Israel (ECI), will begin with an exhibition from the Yad Vashem Museum titled “Architecture of Murder – the Auschwitz- Birkenau Blueprints”.