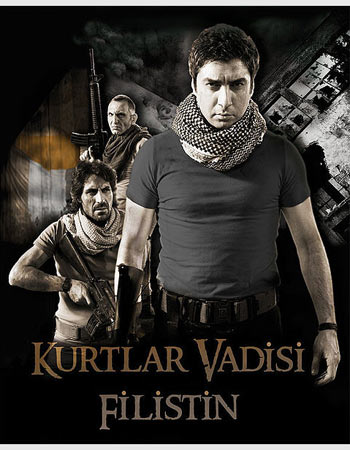 Distributors of Turkish movie depicting events of Gaza flotilla raid delay premier after it was slated to hit German movie theaters on International Holocaust Remembrance Day, deny it was done because of public pressure.

The German premiere of “Valley of the Wolves: Palestine”, a Turkish movie containing anti-Israeli messages, was postponed Tuesday and will not be held as planned on International Holocaust Remembrance Day on Thursday, after the movie and the release date created a media storm and criticism from German and Israeli politicians.

The film’s distributor ‘Pera Film’ announced the postponement Tuesday but insisted that it didn’t come as a result of the harsh criticism of the original decision. The company claims that took the step due to a dispute with over the movie’s age certificate which was set at 16 and above and not because of the public media storm. They also stated that a new premiere dated will be announced in the future.

The movie, is supposedly based on the events of the Turkish flotilla to the Gaza Strip, which was blocked by the Israeli military and ended in a violent incident on board the Mavi Marmara ship.

The movie is a continuation of a poplar Turkish TV series, which aired in 2003 and whose main character is a secret Turkish agent named Polat Alemdar, who overcomes different challenges every week, mostly based on current affairs.

One of the movie’s scenes depicts an Israeli officer who doesn’t hesitate killing Palestinian children. The movie has been subjected to harsh criticism since its production stage began. Some critics claimed the movie was part of an anti-Israeli violent propaganda campaign that bluntly displays anti-Semitic stereotypes.

The decision to debut the movie on January 27 – the day Auschwitz extermination camp was liberated, as well as the international remembrance day for Holocaust victims – stirred heavy condemnation and fierce criticism from across the German political spectrum.

At a press conference held in Brussels before the postponement announcement, Minister of Information and DiasporaYuli Edelstein said that the premiere date was “a direct provocation, lacking in taste and sensibility and all steps possible must be taken against this kind of provocation.”

‘Jews don’t drink blood in this movie – Israelis do’

The President of the European Jewish Congress Moshe Kantor also took part in the event and together with Edelstein defined the masked anti-Semitism as a criticism of Israel and “the greatest threat” to Jews in Europe and Israel. “There is a wonderful way to be anti-Semitic in Europe – mask your opinions as anti-Israeli,” said Edelstein.

“I am speaking of the fact that on January 27, the day when 66 years ago the Auschwitz death machine stopped murdering people; there is a special event – the premiere of ‘Valley of the Wolves’. Jews don’t drink blood in this movie – Israelis do. Jews don’t rape women and kill babies in this movie – Israelis do. And those killed by the action heroes aren’t Jewish – they’re Israeli.”

“The idea to premiere the movie on this date is an example of poor taste,” the coalition parties’ foreign affairs spokesperson was quoted as saying to a local German newspaper.

“The movie is problematic to begin with, because it promotes anti-Israeli violence and incites to anti-Semitism,” said opposition parliament member Kristin Griess, adding, “To screen it on January 27 of all dates is an irresponsible act.”

Online forums and blogs also slammed the movie, claiming Germany was importing “anti-Israeli hatred” from the Turkish street and calling to ban the screening of the movie.

Meanwhile, the media storm surrounding the movie is only expected to help with its marketing. According to Die Welt newspaper, the distribution company already prepared 100 copies of the film – a much larger number than other Turkish films – which it intends to distribute all across the country.

According to online German movie guides, the film will first be screened in the cities Hamm and Duisburg – both boasting large Turkish communities.