The Hungarian Government Under Siege From Many Quarters 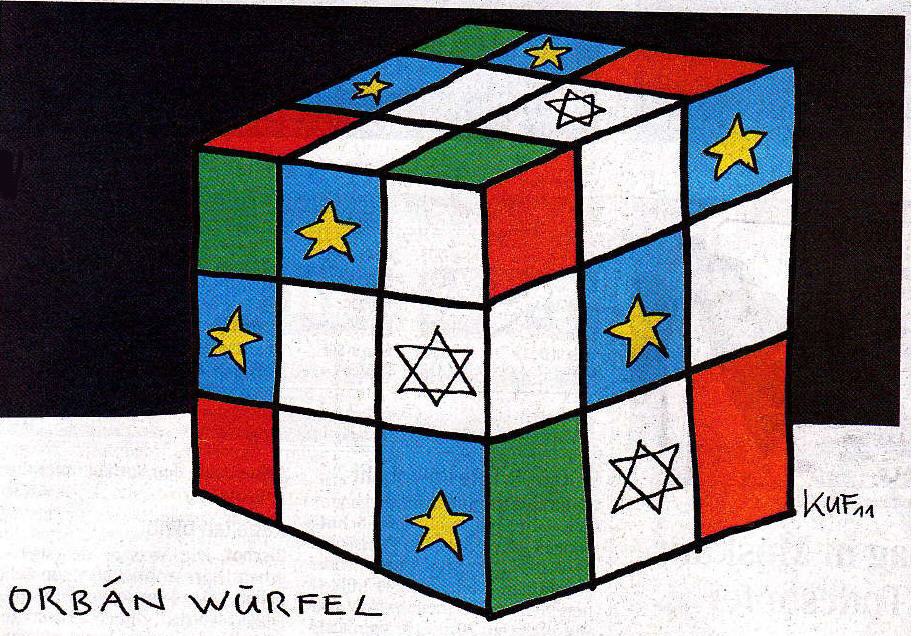 For quite a few days I have been waiting for a good opportunity to use a cover of Magyar Narancs, an opposition weekly of high quality. The name is a reference to the communist-era attempt to cultivate oranges in Hungary. Of course, the climate was unsuitable for oranges and the home-grown product more closely resembled lemons. This was parodied in the movie A tanú (The Witness, 1969) where the so-called home-grown orange–in this case so small that it was even a poor excuse for a lemon–is replaced with a lemon. The big party chief while eating it says, “It’s small, yellow, bitter, but it’s OURS!” Since then “Hungarian orange” has become a metaphor, similar to “goulash communism.”

On the first day of the new democratic parliament in 1990, Fidesz members came with hundreds of oranges and distributed them to the MPs; the orange was used as Fidesz’s logo. But the parting of ways between Magyar Narancs and Fidesz was inevitable. First, Fidesz tried to deprive the magazine of its name, to no avail. Meanwhile the magazine changed its color: from orange to yellow.

Well, in any case, this is the cover that I was hoping to use one day. I think the time has come because Viktor Orbán is really under siege. I will list here some of his problems.

We all know about the media law and Orbán’s reception in Strasbourg. But this is just one of his problems, and I’m not even sure whether it is the most serious one. There is the the Zsolt Bayer problem. The unspeakable article written by him. It was inevitable that sooner or later people would read about it not only in Hungary but also in the foreign press. As far as I could ascertain, the first article about Bayer’s article appeared in Tagesanzeiger, a Swiss paper with this title: “Viktor Orbans Freund diffamiert die Juden.” It’s bad enough that such an article appears at all in a democratic country, but that the author is one of the founders of Fidesz and a good friend of Orbán is really too much.

Today in Die Presse Karl Pfeifer’s article appeared under the headline “Fecal Anti-Semite Honored.” Die Presse is also a conservative paper partly owned by the Austrian Catholic Church. Honored? Oh, yes, adding insult to injury local Fidesz politicians in Nógrád County bestowed the Madách-Prize on Bayer. The prize was named after Imre Madách (1823-1864) whose major work, The Tragedy of Man (1861), is a dramatic poem about 4,000 lines long that elaborates on ideas similar to Goethe’s Faust. Poor Madách would be appalled if he heard that this foul-mouthed nobody received a prize bearing his name. The newspaper picked this illustration to accompany Karl Pfeifer’s article:

Orbán Cube. Well, this is quite something. Therefore it is not at all surprising that Moshe Kantor, president of the European Jewish Congress, announced yesterday that “he will warn European leaders that ‘extremist forces’ are once again emerging from Europe.” He spoke about the problem today on the occasion of International Holocaust Remembrance Day, commemorating the anniversary of the liberation of the Auschwitz-Birkenau concentration camp.

Earlier in the day Kantor met Viktor Orbán. Kantor is obviously a diplomat. Here is a quotation from him: “We know how devoted Hungary and Prime Minister Orban are to democracy and we will call on him to quell any anti-Semitism in his nation and to press for a reinforcement of existing legislation to fight anti-Semitism, racism and xenophobia at the European level.”

Three Austrian writers–the Nobel Prize winner Elfriede Jelinek, Peter Turrini and Michael Scharang–rose to defend András Schiff, who announced earlier that he had received so many threatening letters from his homeland that he feared for his life. In any case, he has no intention of going to Hungary to give a concert and or visit his friends for a while.

Viktor Orbán is feeling the pinch and he reacted immediately. According to MTI Orbán met Kantor and assured him of his best intentions. He claimed that since he became prime minister the situation has changed for the better as far as anti-Semitism is concerned. Moreover, he asserted that “Hungarian political experience tells us that a central political force is the best to deal with extremism.” I’ll refrain from commenting on this one!

Then there is a manifesto in defense of the Hungarian philosophers by the philosopher Jürgen Habermas and Julian Nida-Rümelin, president of the German Philosophical Society. They call the witch hunt of the Hungarian philosophers “the scandal of scandals.” Again, this particular attack by Magyar Nemzet and Gyula Budai, who is supposed to be in charge of “political retribution” leveled against those who are not considered to be friends of Fidesz, has anti-Semitic overtones. Although over thirty grants were made during the period in question (between 2004 and 2007) only six people were singled out, all of whom happened to be Jews or were suspected of being Jewish.

Adding to Orbán’s woes, a Swedish Christian Democratic member of the Council of Europe requested an urgent debate on “the functioning of democracy in Hungary.” The Council of Europe is different from the European Union. It represents all forty-seven states of Europe. It doesn’t deal with economic matters but concentrates on questions of democracy, human rights, and the rule of law. Member states choose delegates to the Council of Europe for four years; the Council convenes four times a year for a week each time. We will see what will happen on that front.

All in all, it wouldn’t be surprising if Viktor Orbán were seeing stars already. Mind you, he is largely responsible for this state of affairs.