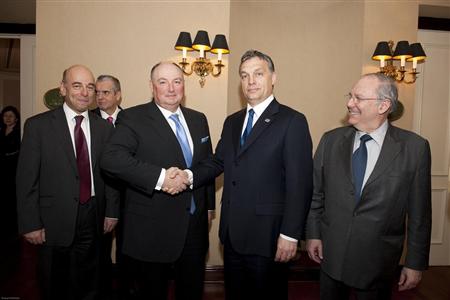 Hungary’s Prime Minister Viktor Orban, whose country currently chairs the European Union Council, told a Jewish delegation that a controversial new media law in his country is specifically meant to combat the anti-Semitic and racist propaganda of the extreme-right.

Orban met Tuesday in Brussels a delegation from the European Jewish Congress (EJC) led by its president Moshe Kantor. They discussed various issues of importance for the Jews in Europe.

Kantor expressed concern about the growing influence of the extreme-right in parts of Europe. He said that “extremist forces” are once again emerging from Europe and stressed the need for added vigilance.

He singled out the Hungarian extreme-right party Jobbik, which he said “behaves like a Nazi party” and is too much tolerated by the government.

“Parties like Jobbik stand in direct opposition to the values of the European Union that Hungary now presides over. The EU presidency could be utilized as a great opportunity for Hungary to lead the way against all manifestations of extremism and hatred,” Kantor said.

“This message of tolerance for the far-right expresses a deep intolerance for the Jewish community and other minorities,” the EJC president said, calling for a “zero tolerance” in Europe on the the question of racism and anti-Semitism.

Orban said that on the contrary, the new legislation was introduced to fight the extreme-right phenomenon in the country.

Kantor told Orban about what he called “a dramatic escalation in anti-Semitism in Europe.” “For the first time since the Holocaust, Jews in Europe are feeling unsafe and in certain communities such as Malmo, Sweden, are leaving en masse,” Kantor added.

They also discussed the “new form of anti-Semitism” with attacks against Israel as the nation state of the Jewish People, as akin to the classical older anti-Semitism.

“The Jewish right to self-determination should be unquestioned and unflinchingly supported, especially in Europe. Those who question its legitimacy and call for a campaign of boycott, divestment and sanctions against Israel should be seen by the European Union as unacceptable,” Kantor said.

“Any call from an official body or organization for a boycott against Israel should be outlawed. Anything less is immoral and illegitimate,” he added, praising France as a “model” for a pan-European legislation against the boycott of a democratic country.

Orban expressed his opposition to the campaign assaulting Israel’s legitimacy.