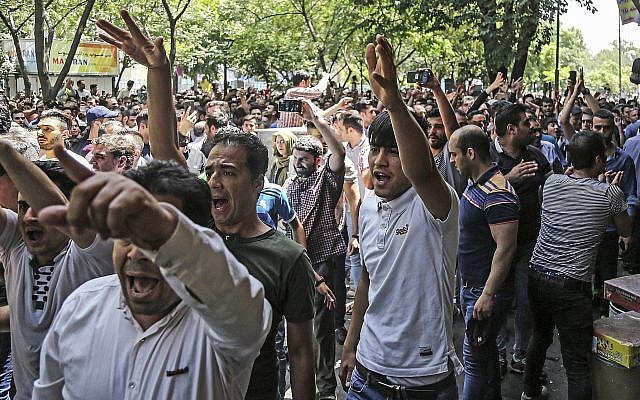 Iranian officials blamed Israel and the United States for protests that broke out in the Islamic Republic, leaving one dead and dozens injured.

“The parliament condemns the Zionist, American, anti-revolutionary and anti-national action of the misled seditionists,” Iranian Parliament Speaker Ali Larijani said Tuesday during an open session of parliament a day after the demonstrations in support of the peoples’ revolution in Egypt that led to the ouster of President Hosni Mubarak..

During the session, lawmakers called for the execution of opposition leaders and former presidential candidates Mehdi Karrubi and Mir Hossein Moussavi. They also chanted “Death to Israel” and “Death to America,” according to reports.

“We have information … that America, Britain and Israel guided the opposition leaders who called for the rally,” deputy police chief Ahmadreza Radan said, according to the semi-official Fars news agency.

The demonstrations ended by Tuesday, according to reports.

Dozens of opposition protesters were arrested in the central Iranian city of Isfahan, and Iranian security forces fired tear gas at protesters marching in central Tehran toward Freedom Square on Monday, Reuters reported.

Iranian officials banned rallies in support of Egypt. Opposition leaders reportedly had planned such rallies after Iranian President Mahmoud Ahmadinejad said in public remarks that the Egyptian reformists had taken a page from Iran’s Islamic Revolution in 1979 in toppling a monarchy supported by the West.

Also Monday, anti-government protesters demonstrated in the streets of Yemen and Bahrain.

U.S. Secretary of State Hillary Rodham Clinton backed the Iranian protestors, telling reporters Monday in Washington that they “deserve to have the same rights that they saw being played out in Egypt and are part of their own birthright.”

The European Jewish Congress called on European leaders to press unequivocally for democracy and freedom for the Iranian people and express concern about the situation in Iran.

EJC President Dr. Moshe Kantor called on European leaders to issue similar responses that were released during the recent demonstrations in the Arab world.

“In the spirit of the ongoing fight for democracy in the region, it is vital that the European leaders do not suddenly fall silent when they are needed the most,” Kantor said. “As Europeans we should fully support those who fight for freedoms that we take for granted.”