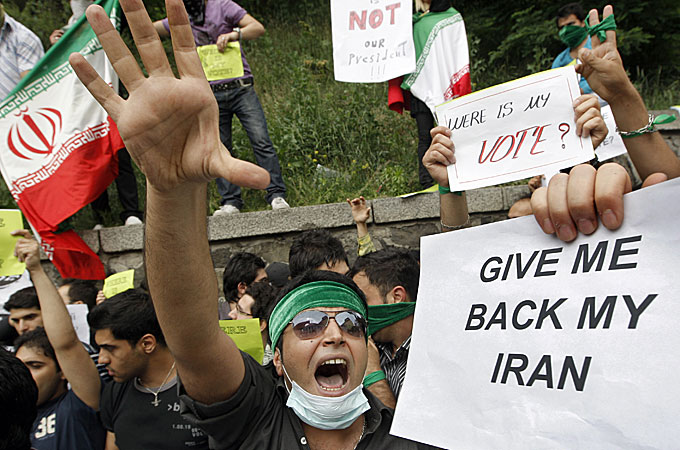 One person was reportedly killed and dozens of opposition supporters arrested on Monday while taking part in a banned rally in the capital Tehran in support of the uprisings in Egypt and Tunisia. The rallies amounted to a test of strength for the reformist opposition, which had not taken to the streets since December 2009, when eight people were killed. Security forces fired tear gas to scatter thousands of people marching toward a Tehran square, a witness said. There were also clashes between police and demonstrators and a number of arrests in the city of Isfahan, a witness told the ‘Reuters’ news agency.

“Death to the dictator,” some of the Tehran protesters shouted, though other demonstrators marched in silence. Some chants drew comparisons between the Iranian leadership and the autocrats deposed in recent weeks in Tunis and Cairo.

Meanwhile, at a session of the Iranian parliament on Tuesday, pro-government legislators chanted “death to Mousavi, Karroubi and Kahatami,” referring to opposition leaders Mir Hossein Mousavi and Mahdi Karroubi and former President Mohammad Khatami. More than 220 lawmakers said in a statement that the trio should be held responsible for the unrest. “We believe the people have lost their patience and demand capital punishment” for the opposition leaders, the statement said. Hardliners have long sought to put high-ranking opposition figures on trial, but the calls for the death penalty signaled an escalation in their demands.

The European Jewish Congress (EJC) urged European leaders to support protests in Iran demanding free elections in that country on Tuesday. EJC President Moshe Kantor called on European leaders to issue similar responses that were released during the recent demonstrations in the Arab world. “In the spirit of the ongoing fight for democracy in the region, it is vital that the European leaders do not suddenly fall silent when they are needed the most,” Kantor said, adding: “As Europeans we should fully support those who fight for freedoms that we take for granted.”

In Washington, US Secretary of State Hillary Clinton expressed her firm support for the protestors in Iran. She said they deserved to have “the same rights that they saw being played out in Egypt” and that Iran had to “open up” its political system. Britain’s Foreign Secretary William Hague declared: “President Ahmadinejad told the Egyptian people that they had the right to express their own views about their country. I call on the Iranian authorities to allow their own people the same right.”

In a speech at George Washington University, Clinton challenged autocratic regimes to embrace online freedom and the demands of cyber dissidents or risk being toppled by tides of unrest. There was no “app” for ending online repression, Clinton said, and pledged American support for ending curbs on internet usage that have become common amid calls for change. The State Department ast week launched Twitter feeds in both Arabic and Farsi to reach out to people throughout the Middle East. “Leaders worldwide have a choice to make. They can let the Internet in their countries flourish, and take the risk that the freedoms it enables will lead to a greater demand for political rights. Or they can constrict the internet, choke the freedoms it naturally sustains, and risk losing all the economic and social benefits that come from a networked society,” Clinton pointed out.

In Tehran, leaders of the Iranian regime immediately hit back. “The main aim of Americans was to simulate the recent events in the Middle East in Iran to divert attentions from those countries,” parliament speaker Ali Larijani told state radio. “We have information…that America, Britain and Israel guided the opposition leaders who called for the rally,” Deputy Police Chief Ahmadreza Radan was quoted by the semi-official news agency ‘Fars’ as saying.