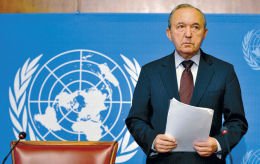 Jewish and Israeli leaders have called on the United Nations to retract the 2009 Goldstone Report, which was highly critical of Israel’s conduct during the Gaza war, after its lead author, the South African former judge Richard Goldstone, distanced himself publicly from parts of the accusations his committee made against the Jewish state. Goldstone wrote in an op-ed for the ‘Washington Post’ that Israel did not intentionally target civilians as a policy during the Operation Cast Lead in the Gaza Strip. Israeli President Shimon Peres said Goldstone owed Israel an apology, and Prime Minister Benjamin Netanyahu said his government would launch an international campaign to cancel the Goldstone Report, and he asked his national security adviser, Ya’akov Amidror, to establish a committee focused on “minimizing the damage caused” by the report.

“There are very few instances in which those who disseminate libels retract their libel. This happened in the case of the Goldstone Report,” Netanyahu declared ahead of the weekly Cabinet meeting. “Goldstone himself said that all of the things that we have been saying all along are correct, that Israel never intentionally fired at civilians and that our inquiries operated according to the highest international standards. “Of course, this is in complete contrast to Hamas, which intentionally attacked and murdered civilians and, naturally, never carried out any sort of inquiry. This leads us to call for the immediate cancellation of the Goldstone Report.”

Goldstone wrote in Saturday’s edition of the ‘Washington Post’: “We know a lot more today about what happened in the Gaza war of 2008-09 than we did when I chaired the fact-finding mission appointed by the UN Human Rights Council that produced what has come to be known as the Goldstone Report. If I had known then what I know now, the Goldstone Report would have been a different document.” He also withdrew what perhaps was his most damaging conclusion: That there was evidence suggesting Israel had deliberately targeted civilians during its war with Hamas. Referring to a UN committee’s recent independent assessment of his report, Goldstone stated that “while the investigations published by the Israeli military and recognized in the UN committee’s report have established the validity of some incidents that we investigated in cases involving individual soldiers, they also indicate that civilians were not intentionally targeted as a matter of policy.”

Goldstone said he might have drawn different conclusions had Israel cooperated with his inquiry. At the time, Israel refused to do so as it regarded the inquiry mandated by the UN Human Rights Council as biased.The retired judge, who is Jewish, also said that it “goes without saying” that Hamas intentionally targeted civilians and noted that unlike Israel, the group did not investigate its own actions.

Evelyn Sommer, the chairwoman of the WJC–North America and member of the World Jewish Congress Steering Committee, called on the United Nations to recognize Goldstone’s retraction and “to revise the report issued by the UN that did immeasurable harm and damage to the State of Israel.” She declared: “It is high time that the United Nations, which gives much lip service to the concept of reform of the world body, re-evaluate its methods of reporting and documentation of investigations such as that of Israel’s Operation in Gaza of 2009.” The WJC leader added: “The Goldstone Report is an example of the kind of libelous charges used by those who wish to harm Israel in the international community. The World Jewish Congress will call on the chair of the UN Human Rights Council and the secretary-general of the United Nations to officially recognize the statement made by Goldstone for the record, and to re-evaluate the report.”

European Jewish Congress (EJC) President Moshe Kantor declared called on the European Parliament to rescind its endorsement of the Goldstone Report. “It should now be clear to all that the conclusions of the Goldstone report were wrong. The European Parliament needs to correct the resulting damage that the erroneous Goldstone Report caused Israel. The revelations by Justice Goldstone that his conclusions were incorrect should prompt European leaders for a timely and appropriate course correction with respect to European-Israeli relations,” Kantor added. “Only by reinforcing cooperation and bilateral relations with Israel will Europe play a more central role in the Middle East peace process,” he said at a General Assembly meeting of the EJC in Budapest.