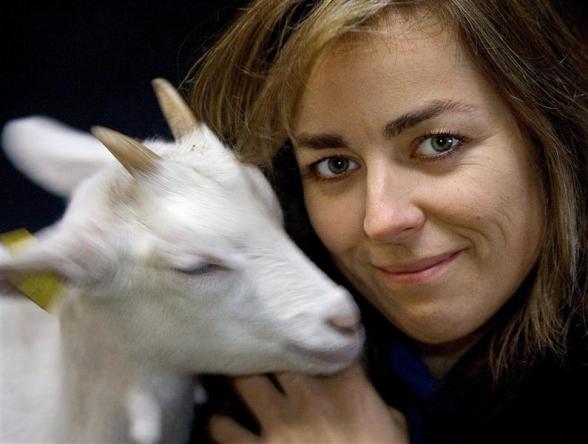 In the Netherlands, an unlikely alliance of an animal rights party and the xenophobic Freedom Party is spearheading support for the ban on kosher and halal slaughter methods that critics say inflict unacceptable suffering on animals.

The far right’s embrace of the bill, which is expected to go to a parliamentary vote this month, is based mostly on its strident hostility toward the Dutch Muslim population. The Party of the Animals, the world’s first such party to be elected to parliament, says humane treatment of animals trumps traditions of tolerance.

Jewish and Muslim groups call the initiative an affront to freedom of religion.

“I can speak for the Dutch Jewish Community and I think for the wider Jewish world, that this law raises grave concerns about infringements on religious freedom,” said Ruben Vis, spokesman for the Netherlands’ CJO, an umbrella of Jewish organizations.

Abdulfatteh Ali-Salah, director of Halal Correct, a certification body for Dutch halal meat, said he felt the debate made Muslims in the Netherlands feel Dutch society is more interested in animal welfare than fair treatment of its Muslim citizens.

“If the law goes through now there’s nothing else to do but protest,” he said. “And that’s what we’ll do.”

As in most western countries, Dutch law dictates that butchers must stun livestock — render it unconscious — before it can be slaughtered, to minimize the animals’ pain and fear. But an exception is made for meat that must be prepared under ancient Jewish and Muslim dietary laws and practices. These demand that animals be slaughtered while still awake, by swiftly cutting the main arteries of their necks with razor-sharp knives.

Most Dutch favor a ban, but many centrist parties feel the issue is a distraction from the more serious issue of abuses at regular slaughterhouses. One of the two parties in the Cabinet, the Christian Democrats, opposes the law out of fear for damage to the country’s international image as a haven of tolerance for religious minorities. The other, the pro-business VVD Party, has yet to say which way it will vote.

If the Netherlands does outlaw procedures that make meat kosher for Jews or halal for Muslims, it will be the first country outside New Zealand to do so in recent years. It will join the Scandinavian, Baltic countries and Switzerland, whose bans are mostly traceable to pre-World War II anti-Semitism.

Holland has proud traditions of tolerance and was one of the first countries in Europe to allow Jews to live openly with their religion in the 17th Century.

After years of campaigning unsuccessfully, the Party for the Animals won a seat parliament in 2006, the first time an animal rights party had entered a national parliament. Around the same time, the anti-Islam Freedom Party of maverick politician Geert Wilders was gaining strength. It finished third in national elections last year on an anti-immigration platform.

The Muslim population, built on a wave of migration in the 1990s, is now about 1 million in a country of 16 million. Dutch Jews number an estimated 40,000 to 50,000 after 70 percent of their community died in Nazi concentration camps.

The two political parties pushing hardest for the ban make for an odd couple, falling at opposite ends of the political spectrum.

“Religious freedom isn’t unlimited,” said Part for the Animals leader Marianne Thieme in an interview. She said the law will be “good news for the two million animals that are slaughtered (without stunning) each year in our country. It’s not a small amount.”

Wilders first brought the issue forward in 2007, when he heard that halal meat was being served at a public school in Amsterdam. “Muslims at our schools must adjust to Dutch norms and values and not the other way around,” he wrote in a letter questioning government policy.

Wilders and the Freedom Party did not respond to requests for comment for this story.

The U.S.-based Simon Wiesenthal Center and European Jewish Congress President Moshe Kantor have both spoken out against the proposed ban. “What’s worse is that there is no conclusive scientific evidence that slaughter without stunning is more harmful or painful for animals,” Vis of the CJO said.

Science surrounding animal slaughter is contentious. A 2009 study in New Zealand that monitored calf brain waves during ritual slaughter concluded the animals probably were aware of their pain. That led the country to ban the practice in 2010.

However, noted American animal welfare expert Temple Grandin of Colorado State University has criticized flaws in the New Zealand study, remarking in particular that the knife used was probably too short.

“The special long knife used in kosher slaughter is important,” she wrote in a paper published on her website. In her experience “when the knife is used correctly on adult cattle, there was little or no behavioral reaction,” she wrote — indicating that the animals did not show signs of suffering before falling unconscious.

The Royal Dutch Veterinary Association has come out in favor of banning the practice.

The organization said in a position statement it believes that during “slaughter of cattle while conscious, and to a lesser extent that of sheep, the animals’ well-being is unacceptably damaged.”

Scientists, animal rights groups and religious groups disagree about the amount of pain and suffering animals experience during slaughter under regular conditions — though all say violations of current law are widespread.

Ali-Salah predicted an outright ban would fail not only due to Dutch domestic political considerations, but also because it is not workable in practice.

“How are one million people going to obtain halal meat from a new source?” he said. “They are certainty not going to stop eating meat overnight.”