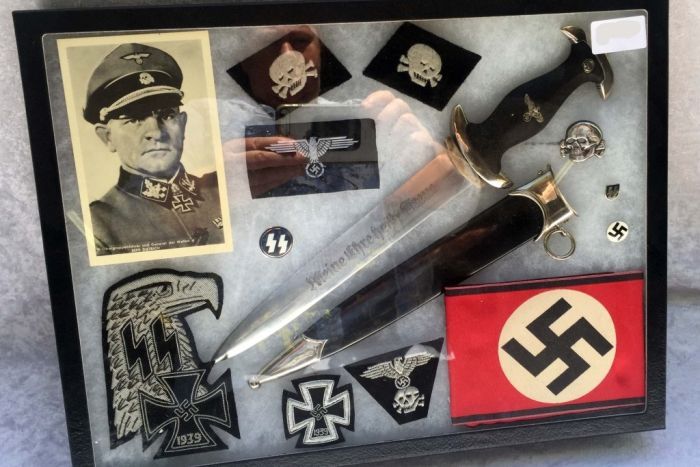 Following a worldwide outcry it now seems that the Munich auction house Hermann Historica will no longer be offering a pair of Adolf Hitler’s reading glasses for sale.

The reserve price had been just over £4,000, while bidding for a silver cigarette case monogrammed with the non-smoking Führer’s initials was set to start at £8,625.

Other items in the blandly-titled sale of German Historical Collectibles From 1919 were to include AH-monogrammed cutlery (starting at £1,500 per item) and a Hitler Youth badge encrusted with diamonds and rubies that was presented to the Nazi dictator in 1942. Bidding for the lattr was due to start at £19,000.

The German auctioneer revised its plans for the sale this week after Moshe Kantor, president of the European Jewish Congress, said the attempt to make money out of these “macabre heirlooms” was a sham and a stain on modern Germany. Dr Kantor said: “As we try to preserve the memory and historic lessons of this dark period these types of events are completely counter-productive and damaging towards educating younger Germans and Europeans about the Holocaust.”

That message may have hit home in the present instance but with a collection of Hitler’s watercolours, the Mercedes-Benz in which he toured Europe and his walking stick all going on sale in the past few years, and suggestions that fragments of his bones and locks of hair may be available, it’s clear there is a thriving market for relics and personal effects of one of the worst mass-murderers of the 20th century.

Dealers in Nazi memorabilia have long argued there is no necessary connection between collecting Third Reich artefacts and sympathising with its genocidal policies. “We’re very aware that it’s not always politically correct or to everyone’s taste,” says Oliver Lock, of Hertfordshire firm Regimentals which deals in militaria from the Napoleonic period to the Falklands.

The company is offering a Hitler Youth arm badge for £45 and an enamelled sign bearing the legend Arisches Geschäft, certifying that a shop was Jewish-free, for £1,050.

“But I would stress that there is no underground Right-wing edge to our company, to the point that the boss is actually Jewish,” he says. “We are history lunatics, we live and breathe it and we very much want to preserve history because as a wise man said those who forget history are condemned to repeat it. I hate the Right-wing thug element and we have nothing to do with them. To be absolutely blunt with you most of them are so poor and stupid they buy nothing from us. They buy mugs showing Hitler’s face and SS T-shirts. Our customers are collectors and the vast majority of them collect frontline combat items because there’s a huge romantic connection with the strife of any soldier.”

Jon Benjamin, chief executive of the Board of Deputies of British Jews, says: “Unsurprisingly there is a fascination with the Nazis and the Second World War. When this interest is pursued through the collection of memorabilia there needs to be a balance between honest historical inquiry and a sensitivity that avoids the glorification of the Nazis and their barbaric actions. This is no different to the balance that must be maintained when creating films or TV programmes on the same subject.”

It is certainly true that the events that ripped Europe apart 70 years ago can exert a fascination well beyond the freak fringe of neo-Nazi sympathisers dreaming of a fascist revival. When auction house Jefferys of Lostwithiel in Cornwall sold a portrait by the young Hitler in 2005 it was bought for £5,200 by a man whose hobby was collecting artworks by famous people.

When the dictator’s armour-plated Mercedes-Benz 770K was sold to a Russian collector two years ago for an estimated £5million it emerged that the purchase was more of a victory trophy than a homage. As a Moscow museum director put it: “For Russians the Second World War isn’t a historical event. For us it happened yesterday. Buying a Nazi car is like sticking one finger up at Hitler.”

The Marquess of Bath, a blameless Liberal Democrat, is custodian of some 30 Hitler paintings, a first edition of Mein Kampf and a pair of SS leader Heinrich Himmler’s spectacles. Having inherited them from his father he briefly got in trouble when he proposed exhibiting them at Longleat his Wiltshire stately home but he keeps them locked away in the clock tower. “I have the deepest disrespect and loathing for everything that Hitler stood for,” he has stressed.

The same cannot be said for his father the sixth Marquess. Although the old Lord Bath was a decorated veteran of El Alamein there seems little doubt his Hitler collection was motivated by admiration. Nick-named the “fascist peer” in the Sixties he said the Nazi tyrant was “one helluva guy” and admitted admiring the Führer’s ruthlessness.

Heavy-metal musician Lemmy, lead singer of Motorhead, is another famed collector of Nazi memorabilia. Describing himself as an anarchist he insists he just likes the uniforms and has never been able to understand racism. But Steven Barker, the man jailed for allowing the death of his 17-month-old stepson Baby P, had a passionate interest in neo-Nazi politics as well as the regalia he collected. He is reported to have acquired a prison tattoo in honour of the far-Right organisation Combat 18.

David Irving, the self-styled historian jailed in Austria for denying the Holocaust, set up a website selling Nazi memorabilia. He claimed his items included a piece of Hitler’s bone and strands of his hair as well as his walking stick. A glance at a neo-Nazi website, in which users repeatedly ask for details of Irving’s (now defunct) web address, shows how interested Hitler’s political admirers are in such artefacts.

On one message board a far-Right extremist advises users on how to circumvent bans on selling Nazi memorabilia on eBay and Yahoo!, redirecting them to more specialised websites. One of these is an “international auction house” in Kansas. In 2003 it sold a monogrammed dressing table set belonging to Hitler’s mistress Eva Braun for nearly £1,300.

Oliver Lock of Regalia is scathing about Irving. “What he’s got to do with collecting I’ve no idea,” he says. “The guy can’t even collect honest history. The items he was trying to sell were probably about as original as his thoughts – absolute made-up nonsense. He has almost nothing to do with collectors and I’ve never met a collector yet who has said to me, ‘I really reckon what Irving says is true’.”

Nevertheless it’s hard to believe that the eventual buyer of Hitler’s gold Nazi party badge – removed from the dictator’s charred corpse in Berlin then stored in a Moscow archive until it was stolen in 2005 – was motivated only by a desire to own a piece of history.

The men who stole the Arbeit Macht Frei (Work Sets You Free) sign from Auschwitz in 2009 were petty thieves but it’s assumed they were hoping to tap into a particularly sick end of the collectors’ market. This is the kind of mentality that fuels the trade in replica canisters of Zyklon B, the deadly gas used in Nazi concentration gaps, which are available today from a PO Box address in Rapid City, South Dakota, at £32.50 each.

Many people assume the trade in Nazi memorabilia is illegal in Germany but the only thing that’s banned is the display of the swastika or any other SS insignia.

Clearly sensitive to the possible furore, Hermann Historica was reported this week to have initially tried to ask its bidders to sign a statement declaring that any Nazi artefacts purchased would be used for educational purposes only.

But with some elements of the ghoulish trade so obviously driven by ugly motives Dr Kantor of the European Jewish Congress says such declarations are irrelevant. “It does not matter what the auction house requires of those who will bid on these items. The mere sale of these items sends a message that it is OK to profit from evil.” It’s hard not to share his distaste.