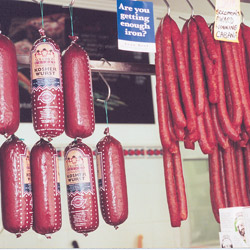 A bill to ban ritual slaughter was withdrawn by the Dutch Senate days before a scheduled vote.

Animal Rights Party leader Marianne Thieme withdrew the bill late Tuesday after a majority of senators expressed their objection to the ban on kosher slaughter, or shechitah. The measure had passed the lower house of the Dutch parliament in June.

The bill had required that animals be stunned before slaughter. Jewish and Muslim ritual slaughter must be performed with the animal fully conscious.

A slaughterhouse that could prove the animal did not suffer more pain than when stunned would have been exempted from the prohibition.

Under a compromise presented by Agriculture Minister Henk Bleker, an agreement could be made with Jewish and Muslim slaughterhouses regarding the length of time that an animal is conscious before dying and the number of animals to be ritually slaughtered.

“This compromise is befitting Holland’s long history of freedom of religion and specifically, tolerance towards its Jewish community,” Kantor said in a statement. “While the details have to be worked out, we hope the spirit of the compromise will be embraced by all sides of the debate.”

“The compromise appears to adequately balance the religious needs of Dutch Jews and Muslims with the concerns of animal rights advocates,” Berman, who initiated letters to the Dutch parliament protesting the proposed ban, said in a statement. “It shows that shechita and humane slaughter are not mutually exclusive.”

The European Jewish Congress, along with the Dutch Jewish Community and Shechita UK, led a campaign against the proposed ban. The campaign has included presenting the case to leading Dutch politicians and ensuring that the Jewish voice was heard in the public arena.

The European Union requires animals to be stunned before slaughter but makes exceptions for religiously mandated ritual slaughter. Nevertheless, ritual slaughter is banned in Luxembourg, Norway, Sweden and Switzerland.