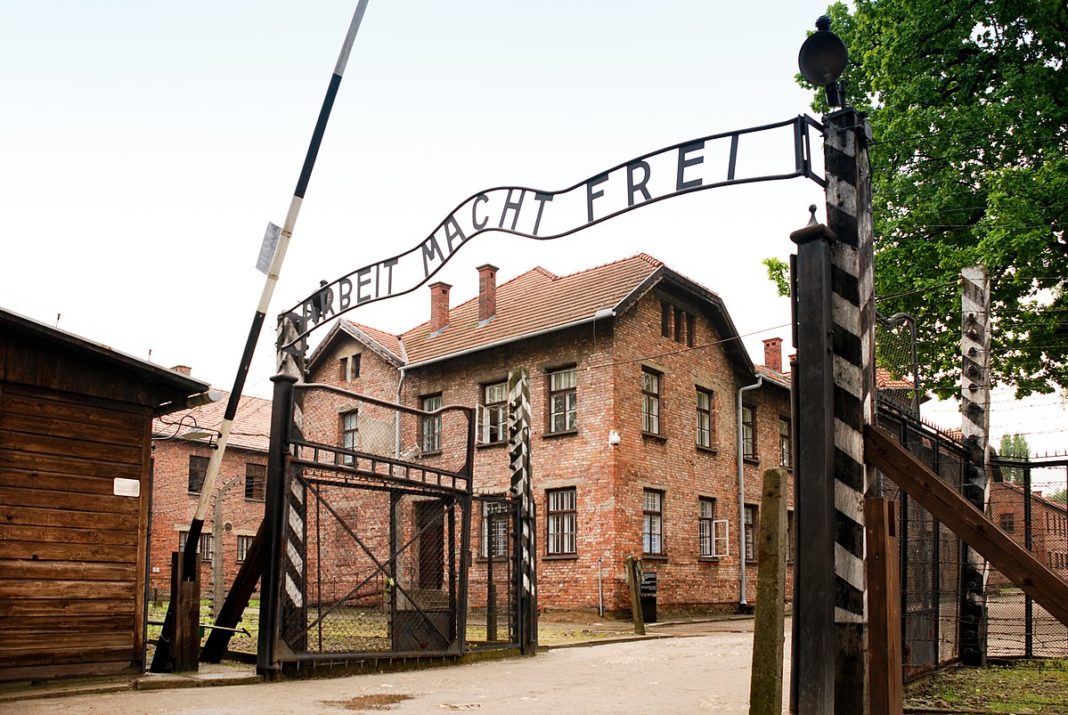 Two famous designers from Antwerp have announced plans to erect a flashy, Holocaust-themed fence here featuring a crematoria and replicas from the Buchenwald concentration camp. Designers Job Smeets and Nynke Tynagel revealed the project after a Dutch museum rejected their “inappropriate” works on Auschwitz.

The fence, which Smeets, 40, and Tynagel, 34, designed, had been commissioned by a Dutch art collector for the collector’s estate, Smeets said during a performance on a prime time Dutch television show on December 7. He said he would not reveal the collector’s identify. The fence design includes a translation of the German writing on the gates of Buchenwald – Jedem das Seine (“to each his own”).

Smeets and Tynagel – described in a New York Times profile piece as “the poster boy and girl of the new expressionism in design” – designed for the same collector a dining set with a mass-grave motif. They also sent the Groninger Museum prints of tablecloths with an Auschwitz-Birkenau theme to be displayed along with other works by Smeets and Tynagel in the museum’s reception room.

However, the museum – among Holland’s finest contemporary art museums – refused to show the tablecloths, which display an overview of the compound and a heap of reading glasses in the middle.

Willemien Bouwer, a spokeswoman for the museum, said the hall is sometimes used to host parties and dinners.

“I cannot treat beauty unless I also treat evil,” Smeets said about his Holocaust works. As an artist, he added, “I try to bring not only good news.”

Merijn Bolink, an acclaimed Dutch visual artist, said he did not oppose controversial treatment of the Holocaust, but said it should also be meaningful. “Smeets’s work seems provocative but hollow.”

“Those responsible for such disgusting works may be just seeking attention, or it could be something more sinister,” Michel Freilich, editor-in-chief of the Belgian Jewish paper Joods Actueel, said. “In the latter case, the authorities should look into the matter. In Germany the construction of such a thing would definitely be prevented.

CIDI, a Hague-based watchdog on anti-Semitism, wrote the alderman of the city of Amsterdam, urging him not to issue a permit for building the “offensive fence, which is an attempt to attract attention regardless of the pain their actions cause.”

Moshe Kantor, president of the European Jewish Congress said of the proposed design, “Trivializing the Holocaust in such a way minimizes its importance and relevance for the current generation.”

He added that while EJC “safeguards” freedom of speech, “there must be standards of decency and morality in the public sphere. The annihilation of six million Jews and millions of others must not become a tool to merely titillate and outrage in the name of art.”