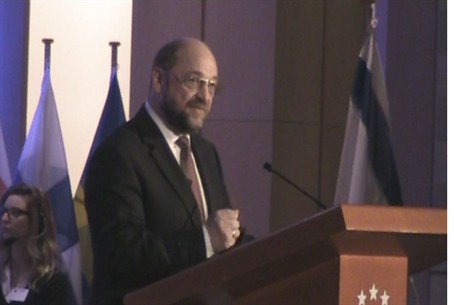 Both the incoming and outgoing presidents of the European Parliament vowed “never again” in ceremonies Tuesday in Brussels marking International Holocaust Remembrance Day.

In a day filled with speeches, the one by incoming President of the European Parliament Martin Schulz was especially memorable; the German lawmaker told a special session of the legislative body, “I am born after the Second World War. But as a German representative I feel that I have a very specific responsibility, because what happened, and what was decided at the so-called Wannsee Conference was decided in the name of the German people, and I am a representative of the German people.

“The German people of today are not guilty, but responsible… to keep the memory and to never forget that what happened, happened in the name of our nation.”

Therefore, he said, “Never again.” Whatever anti-Semitism or anti-Israel activity is happening in the world today, “we are the first ones who have to defend our Jewish friends,” Schulz said.

Outgoing European Parliamentary President Jerzy Buzek also spoke at the gathering, explaining that as a man born in occupied Poland, a scant 60 kilometers from where the Auschwitz concentration camp was being built, he grew up and has returned to the area “with the same dreadfulness and sadness in [his] heart.”

Intellectually, said Buzek, “We are helpless in trying to understand [the Holocaust], to name it, to classify it… it was an act of rejection of our culture, religion, our humanity. Today, [it] remains a relevant warning… That’s our obligation – to do everything to prevent any repetition in the future,” he said.

During the ceremonies European Jewish Congress (EJC) President Moshe Kantor received France’s highest honor, the Order of the French Foreign Legion. Kantor noted in his acceptance speech that a new “regime of evil” is now rising, and warned that this “kingdom of evil” – the Islamic Republic of Iran – poses perhaps the greatest threat to the State of Israel that the Jews have faced since the Nazis.