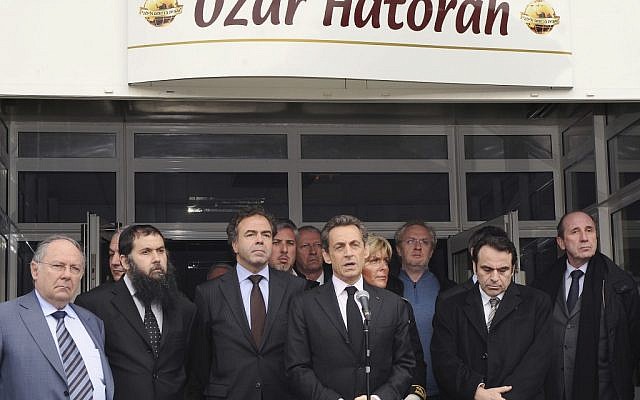 Tragedy struck the Jewish community of Toulouse, France on March 19 as a motorcycle gunman opened fire in front of a local Jewish school, Ozar Hatorah, killing a rabbi, his two small sons and one other child.

The victims were: visiting school teacher Rabbi Yonatan Sandler and his sons Aryeh, 6, and Gavriel, 3.5, from the Kiryat HaYovel neighborhood of Jerusalem, Israel, and eight-year-old Miriam Monsonego, the daughter of Rabbi Yaakov Monsonego, the school principal. Three other children aged 6-8 were critically injured.

The children were waiting for a bus to take them to the Chabad Gan Rashi elementary school.

The shooting occurred a bit after 8:00am at the school drop-off, when the shooter got off his scooter and opened fire. The shooting comes a week after two other shooting attacks in the area against uniformed paratroopers in Toulouse and Montauban and may be linked as forensic analysis showed the same weapon was used in all three attacks. French prosecutors are studying possible terrorist links and may categorize this massacre as an anti-Semitic hate crime, but the motive for Monday’s attack is still unclear.

The Toulouse Ozar Hatorah school, a junior high and high school in a quiet residential neighborhood with 200 pupils, is part of a national chain of at least twenty Jewish schools throughout France, educating children of primarily Sephardic, Middle Eastern and North African descent. France has western Europe’s largest Jewish community, estimated at 500,000 people.

Chabad is very active throughout France with hundreds of representatives around the country and four Rabbis in Toulouse alone. This tragedy has left the community traumatized, and Chabad Rabbis have expressed outrage and horror at the deadly violence.

President Nicolas Sarkozy arrived in Toulouse shortly after the attack and called the shootings an “abominable drama and a “frightening tragedy.” He denounced “the savagery” of Monday’s attack on a school, and vowed to find the killer or killers. “We will find him,” he said.

“It’s a day of national tragedy,” Sarkozy continued. “The barbarism, the savagery, the cruelty cannot win. Hate cannot win. The nation is much stronger.”

A spokesman for the interior ministry said that security was being tightened at all Jewish schools in the country.

Israel’s foreign ministry expressed outrage at the killings: “We are following with great shock reports coming from Toulouse and we trust the French authorities will solve this crime and bring those responsible to justice.”

While many of the details are still emerging, it appears that this was a premeditated attack with the intention to murder Jewish children,” said Moshe Kantor, president of the European Jewish Congress.

“We hope the authorities will spare no resources in apprehending the perpetrator. Whoever did this is looking to target the Jewish community at its weakest point, its youth, in the hopes of spreading fear throughout the community.” Mr Kantor continued, “They will not succeed, the Jews of Europe in general and the Jews of France in particular have a long history of standing firm against hatred and violence. I know as a community French Jewry will send a message of strength and resilience in the face of those who wish to terrorize them. The greatest defense against race-based murder is not by creating higher walls and more effective security systems, but by teaching and imparting tolerance in the classrooms.”

RCE deputy director Rabbi Aryeh Goldberg added: “This act of barbarity and murder will be met with a Jewish response. We will bury the dead, look after the injured, and we will demand justice is pursued through the appropriate channels. This attack is an attack on the whole Jewish community; we feel the pain of the families who have lost loved ones and as a community we will show our reaction. If there are people who want to scare the Jewish community into submission, our response will be to show them that we will not be bowed, the opposite is true. We will build more schools, synagogues and other Jewish institutions.”