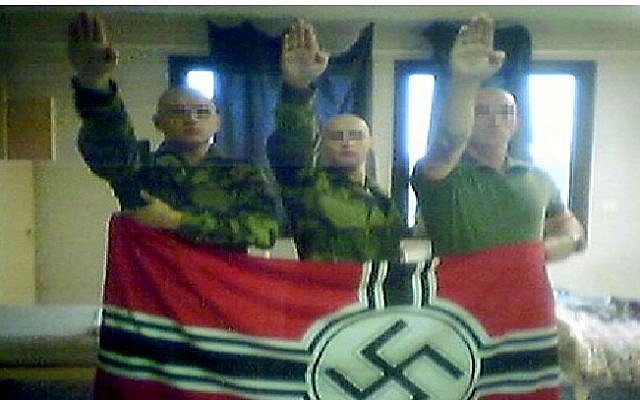 Rabbi Jonathan Sandler, his two sons and another girl gunned down; all four were dual Israeli-French citizens; initial reports point to member of neo-Nazi gang.

A rabbi, his two young sons and another young girl were shot and killed at a Jewish school in the French city of Toulouse on Monday morning.

At around 8 a.m., with more than 100 students and other worshippers inside a synagogue adjoining the Ozar Hatorah school, the gunman coolly got off his motorbike. He opened fire at 30-year-old Jonathan Sandler, a rabbi who taught at the school, and his sons, 4-year-old Gabriel and 5-year-old Arieh, while they waited for a bus to a Jewish primary school across town.

As the shots rang out, panicked students darted inside the school grounds and the attacker chased them, witnesses said. At one point, he grabbed the principal’s 7-year-old daughter, Miriam Monsonego, by her hair, shot her in the head and fled.

Cries of, “There are shots! there are shots!” rang out in the synagogue, recalled a 29-year-old neighbor who gave only his first name, Baroukh. He said some children took refuge in a basement.

Nicole Yardeni, a local Jewish official who saw security video of the attack, described the shooter as “determined, athletic and well-toned.” She said he wore a helmet with the visor down.

The gunman was still at large on Monday night. France’s Ambassador in Israel, Christophe Bigot, said the “crazy killer” may have been involved in two previous fatal shootings.

All of the dead were dual Israeli-French citizens, the Israeli Foreign Ministry said. By 8 p.m., as a dozen police blocked access to the school, cries again echoed from within as community members mourned over the victims’ bodies before they were to be flown to Israel for burial.

The bodies of the four victims were brought to the school Monday night for a vigil service where thousands of community members and others gathered to recite Psalms.

French President Nicholas Sarkozy, his Prime Minister François Fillon and other senior officials attended a ceremony at Paris’s Nazareth Synagogue on Monday evening, reciting Psalms in honor of the victims.

Sarkozy ordered all French schools to observe a moment of silence on Tuesday in memory of the victims of the deadly shooting spree, which he called “a national tragedy.”

He vowed on Monday night to use “all available resources” to bring the perpetrators to justice, and said he was utilizing France’s anti-terror mechanisms, raising the national security alert level, and bolstering security at all Jewish and Muslim facilities.

“Of course, by attacking children and a teacher who were Jewish, the anti-Semitic motivation appears obvious,” Sarkozy said. “Regarding our soldiers, we can imagine that racism and murderous madness are in this case linked.”

Also Monday night, UN Secretary General Ban Ki-moon condemned the attack “in the strongest possible terms,” according to the Agence France Presse. He added that he was saddened by the deaths.

“We are having a very hard time coming to terms with what happened,” he told The Times of Israel by phone. “It’s a tragedy, it’s a catastrophe. It’s still hard to imagine that someone just came to the school and shot and killed children,” he said. “But we need to recognize and internalize that this really did happen, otherwise it’s going to become a nightmare that will never end.”

Prime Minister Benjamin Netanyahu led international condemnation of the attack. The Palestinian Authority also condemned it as an act of terrorism, and its President Mahmoud Abbas sent a message of condolence to the victims via Sarkozy.

Otzer Hatorah is located in the Jolimont part of the city, in the northeastern section of Toulouse. Ozar Hatorah has a junior high, a high school and a kollel, or yeshiva for married men.

The school was cordoned off Monday by police, who then escorted other children out. One officer held a distraught girl, her face in her hands. A mother and son wearing a yarmulke walked away from the site, their faces visibly pained. A video camera was visible at the school’s entrance.

“We’re very sad, but no one is panicking,” said Yves Bounan, the president of Gan Rachi, the primary school the victims attended, a few hours after the shooting. “The parents are slowly picking up their children. We don’t know yet how to react to this.”

“The drama occurred a bit before 8 a.m. A man arrived in front of the school on a motorcycle or scooter,” prosecutor Michel Valet said, adding that the man got off his scooter outside the school and opened fire.

“He shot at everything he had in front of him, children and adults,” he said. “The children were chased inside the school.”

Marc Sztulman, a leader of the Jewish community in Toulouse, confirmed that some students were severely wounded and are still in critical condition.

“We are left in disillusion and despair,” he told The Times of Israel in a phone interview from Toulouse. “We are still in utter shock and disbelief. We don’t know what happened exactly.” He said he had “absolutely no idea” who could be behind the shooting.

“It’s a tragedy. And it’s a tragedy that there are insane people who are capable of doing such a thing,” Sarkozy told French TV. “I can’t accept this idea that one can massacre Jewish children in front of their school.”

“It’s a day of national tragedy,” Sarkozy said after arriving. “The barbarianism, the savagery, the cruelty cannot win. Hate cannot win. The nation is much stronger.”

The chief rabbi of France, Gilles Bernheim, told French news channel BFN he was horrified and upset by the shooting. He said he planned to visit the site immediately.

World ORT representative in France Guy Seniak said: “This shows that Jewish institutions have to be very cautious and I expect that we will now see a period where security is prioritized. The important thing is to be aware and not to panic. It’s an old problem: not to make ourselves live in a ghetto while, at the same time, to ensure we have the best security.”

In Jerusalem, Netanyahu condemned the killings and branded them an apparent consequence of “murderous anti-Semitism.” Defense Minister Ehud Barak said “whether it was a terror attack or a hate crime, the loss of life is unacceptable.”

Police have tightened security around Jewish institutions in the city. The city was on lockdown as authorities searched for the shooter.

Sandler, originally from Paris, moved back to France from Israel a few months ago. He had lived in the Kiryat HaYovel neighborhood of Jerusalem and studied in a nearby yeshiva.

Sandler was a dual French-Israeli citizen, a representative of the Toulouse branch of CRIF said on Monday afternoon. A former student of the Otzar Hatorah school where the shooting took place, he returned to teach Jewish studies there recently.

A man who lives near the school said he spoke with Sandler just before he was shot and killed.

“I said ‘Bonjour’ to him like normal,” said the 29-year-old, asking to be identified only by his first name Baroukh.

“Then he went out into the school entrance. I heard the shots and I turned around and saw him on the ground. He looked dead. But I didn’t have much time to see who did it because I panicked and started running away.”

The shooting happened in the same area where a gunman on a motorbike opened fire on three uniformed paratroopers at a bank machine last Thursday, killing two and critically wounding the other. The attack, in the town of Montauban about 50 kilometers (30 miles) from Toulouse, occurred not far from the soldiers’ barracks. Four days earlier, a gunman on a motorbike shot and killed another paratrooper in Toulouse. French media reported that the paratroopers were of Arab origin.

“It is too early to establish a sure link” between Monday’s shooting and those of the paratroopers last week, the prosecutor said. “But there are elements that justify asking very serious questions.”

Later reports indicated that French investigators think the gunman may be linked to, or even one of, a trio of French paratroopers who were discharged for links to neo-Nazis, having been pictured posing with a swastika in 2008. The French daily Le Point said their profiles matched the initial information about Monday’s killer.

In an apparently separate incident, threatening letters were sent to two Parisian synagogues on Monday. According to the French Police, letters saying, “You are the people of Satan, hell awaits you” were sent to synagogues in the capital’s eighth and 19th arrondissements.

Local community head Bensemoun said there was a “difficult climate” in France for Jews, referring to anti-Semitism. Although annual reports show a decline in the number of anti-Semitic incidents, they have become more violent, he said.

Yossi Gal, Israel’s ambassador to France, said from the site of the shooting on Monday evening that he was “certain that the French authorities will do everything in their power” to bring the shooter to justice.

Leaders of Jewish organizations in North America and Europe responded to the shooting, as well.

“This is a brazen assault on France and French society, and another telling reminder of the dangers that exist for Jewish communities in today’s world,” David Harris, executive director of the American Jewish Committee, said in a statement.

Anti-Defamation League National Director Abraham Foxman noted that the Jewish community of Toulouse has been targeted in the past three years with anti-Semitic acts of violence.

“Whoever did this is looking to target the Jewish community at its weakest point, its youth, in the hopes of spreading fear throughout the community,” Moshe Kantor, the president of the European Jewish Congress, said in a statement. “They will not succeed. The Jews of Europe in general and the Jews of France in particular have a long history of standing firm against hatred and violence, and I know as a community French Jewry will send a message of strength and resilience in the face of those who wish to terrorize them.”