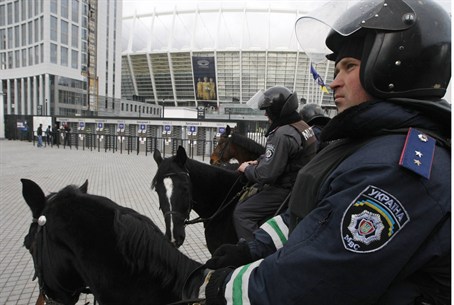 A young Jewish man was critically injured over the weekend during a brutal assault in Kiev, Ukraine.

Medical teams who responded to the scene of the assault on Saturday evening reported they found the boy lying bloodied in the street and raced him to the hospital. He was reported to have been unconscious and required the use of a respirator.

ZAKA representative in Kiev, Jacob Silberman, told Arutz Sheva’s Russian department, “after the Second Seder the young man was jumped by a group of people, not far from the synagogue.”

“The neighborhood is not new to violence,” stressed Silberman, “A few years ago a Jewish boy was attacked in the same place.”

Silberman added they are trying to fly Saturday’s victim to Israel for medical treatment, “but this was serious and we’re not sure it will be possible”.

Silberman said “the Jewish community is at a loss. This is not the first time this has happened. But this time we are trying to raise awareness.”

“We don’t want more incidents,” he added. “Jews here do not want to live here in fear.”

Silberman said the Saturday’s victim, Aharon Alexander, 25, was circumcised just two weeks ago. During the Soviet Era circumcision was forbidden.

European Jewish Congress President, Dr. Moshe Kantor, called on Ukrainian officials to do everything necessary to hunt down the suspected neo-Nazis who perpetrated the attack..

“We are confident that the Ukrainian authorities will act swiftly against the perpetrators of this hate crime and will bring them to swift justice.” Kantor said.

“This attempted murder by neo-Nazis in Kiev, just weeks after the Islamist murders in Toulouse, by groups who have nothing in common except for a visceral hatred of Jews, is phenomenon that European leaders have to stamp out now.” Kantor said.

“We call on European leaders to act swiftly to strengthen legislation, bolster education and increase intelligence sharing to prevent what could become a tsunami of hate and violence against the Jews of Europe.”