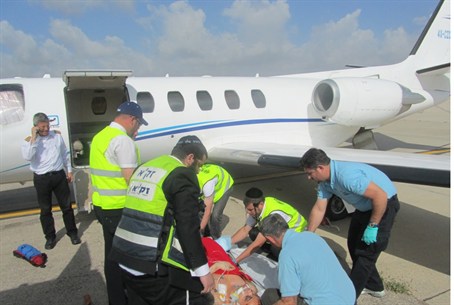 ZAKA rescue services volunteer Aharon Alexander was flown to Israel from Ukraine in a private plane Wednesday and underwent an emergency operation for wounds suffered in a brutal attack near a Kiev synagogue late Saturday night. He is in critical condition.

Alexander, a 25-year-old yeshiva student, was viciously attacked, apparently by neo-Nazi skinheads. He was rushed to a Kiev hospital.

Ukraine Jewish community president Alexander Levin paid for the private plane that served as an ambulance, leaving Ukraine after midnight and arriving at Ben Gurion Airport at 9:30 a.m.

ZAKA volunteers met the plane and rushed Alexander to Ichilov Hospital in Tel Aviv, where he underwent an operation on his head. He also suffered severe blows on other parts of his body. The hospital contributed its services to try to save Alexander.

He is unconscious and is breathing with the help of machines, ZAKA volunteer Yoel Asman told Arutz Sheva. “We are on call with Alexander all the time in Kiev, and we are worried about his condition.” Asman said.

A security camera at Kiev’s central synagogue showed a youth leaving the building with a knitted kippa. The Jewish community sent out a search team to look for him after he did not return to his residence after several hours.

Israel’s ambassador advised media not to jump to conclusions that the attack on Alexander was anti-Semitic, despite previous concerns from the Jewish community over skinheads.

“We are confident that the Ukrainian authorities will act swiftly against the perpetrators of this hate crime and will bring them to swift justice, European Jewish Congress President Moshe Kantor said after the attack.

“This attempted murder by neo-Nazis in Kiev, just weeks after the Islamist murders in Toulouse, by groups who have nothing in common except for a visceral hatred of Jews, is a phenomenon that European leaders have to stamp out now,” he added.