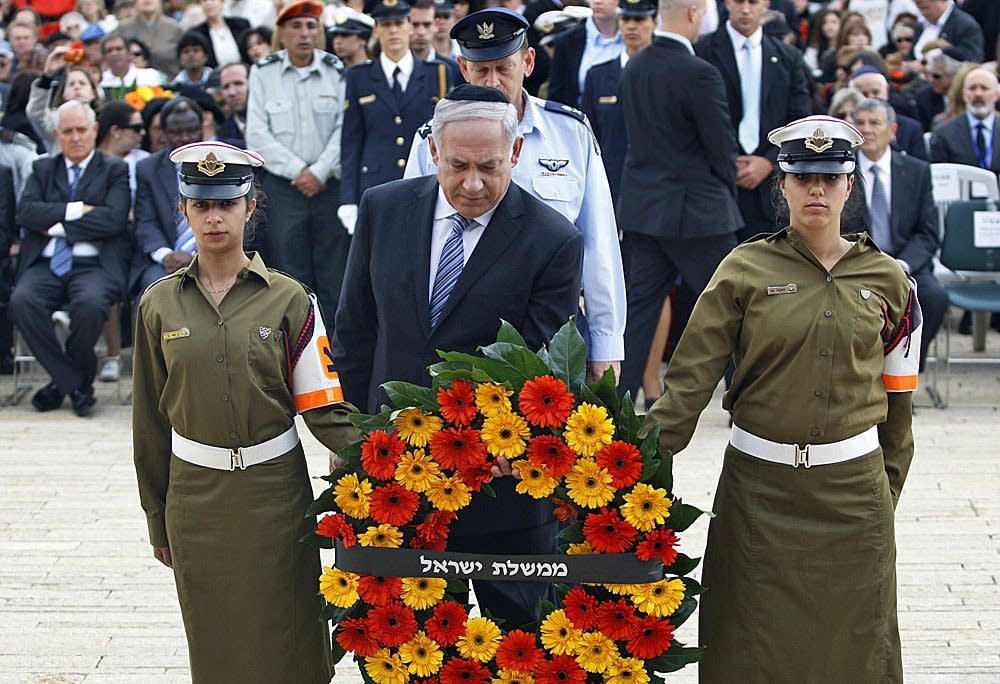 Israel’s president told of his own family’s suffering at the hands of the Nazis in World War II, speaking at the Wednesday opening of the annual memorial day for the 6 million Jews killed in the Holocaust and drawing parallels with modern-day Iran.

Shimon Peres and Prime Minister Benjamin Netanyahu both called on the world to “learn the lessons” of the Holocaust and stop Iran from acquiring atomic weapons.

“The Iranian regime is acting openly and decisively toward our destruction, and it is acting feverishly to develop a nuclear weapon to achieve this goal,” Netanyahu said.

Peres, who was born in the Polish town of Vishneva in 1923 and migrated to pre-state Israel before the war erupted, learned later how Nazi troops beat members of his extended family and ordered them to march toward the town’s synagogue.

“Someone yelled ‘Jews, save yourselves!’ The Germans shot those who tried to escape. The rest arrived at the synagogue that was made of wood. Its doors were locked. They were all burned alive,” he said. “That was also the last day of Rabbi Zvi Meltzer, my grandfather, my mentor. He was burned with a prayer shawl on his head. That was the last Jewish day in Vishneva. Not a single living Jew remained.”

Peres, 88, spoke at Yad Vashem, Israel’s official Holocaust memorial, before hundreds of Holocaust survivors and their families, Israeli leaders, diplomats and others.

The Israeli flag flew at half staff and a military honor guard stood at one side of the podium as poems and psalms were read and the Jewish prayer for the dead was recited.

Peres, a Nobel Peace Prize laureate, linked the Nazi genocide to Iran’s suspected drive to acquire nuclear bombs and its leaders’ repeated references to the destruction of Israel.

He said humanity “must learn the lessons of the Holocaust and face existential threats before it is too late.”

Netanyahu also warned of the danger posed by Iran.

“Those who dismiss the Iranian threat as a whim or an exaggeration haven’t learned a thing from the Holocaust,” he said. “To be deterred from telling the truth – that today, like then, there are those who want to destroy millions of Jews – that is disrespectful of the Holocaust. That is an insult to its victims and that is ignoring its lessons.”

On Thursday morning, Israel is scheduled to come to a standstill as sirens wail for two minutes. Pedestrians typically stop in their tracks, cars and buses halt on streets and highways and drivers and passengers stand on the roads with their heads bowed.

Moshe Kantor, president of the European Jewish Congress, said his organization expects anti-Semitic attacks to rise if European economies sink into further crisis, if Israel attacks Iran or if violence erupts between Israel and the Palestinians.